Features
Developing the Engines of Tomorrow 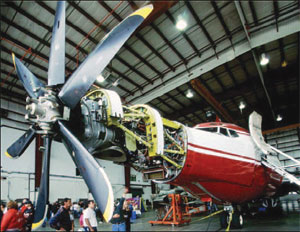 One of the great things about working in civil aviation is coming
across marvels of technology by surprise. Such was the case for this
writer a few months ago when I was looking at aircraft photos on a Web
site. I encountered some images of a jet-powered airplane with a
bulbous nose, unpainted metal panels on top of the fuselage, and five
engines – four large and one considerably smaller. The aircraft was
identified as a Boeing 720 (of the B707 family).

According
to the photographer’s text, the airplane was a “flying testbed,” with a
registration of C-FETB. Using Transport Canada’s online aircraft
registry, I discovered that it is owned by Pratt & Whitney Canada
(P&WC), the world-famous aerospace company that designs and
manufactures turbine engines. After contacting P&WC, I learned that
C-FETB is one of three flying testbeds (FTBs) operated by the
corporation.

P&WC opened a customer training facility in
1968 (the first of its kind), which served as an industry model. In
December 2004, P&WC’s 50,000th customer was welcomed at the
company’s Customer Training Centre in St-Hubert, QC. Last year,
P&WC delivered its 60,000th engine – to Dassault Aviation,
manufacturer of Dassault Falcon corporate jets. In addition to
powerplants for business aviation, P&WC is a leader in the design
and manufacture of regional turboprops and helicopter engines. It also
supplies the auxiliary power units (APUs) for the Boeing 747-400 and
Airbus 380.

In the past 12 years alone, P&WC has certified
close to 60 turbine engines, a record that no other manufacturer has
matched to date. It’s an achievement involving hundreds of flying hours
using the company’s FTBs, which are operated under CAR 604. The first
B720B was acquired in 1989 (and subsequently underwent airframe
modifications to accommodate engines of various sizes for testing). All
of P&WC’s flying testbeds were civilian airplanes prior to being
re-designated for experimental test purposes. The airframes were
modified by a third party in a cooperation arrangement; P&WC
retained the certification ‘envelope’ and the other company carried out
the modification work. The second 720B was bought in 2000, and the
Boeing 747SP in 2001.

The red B720B is based at St-Hubert and is
the only FTB in P&WC’s fleet that can have a turboprop engine
installed (in the nose). Seventy people are employed at St- Hubert. The
blue B720B and B747SP are based at Plattsburgh, NY, where there are 30
employees who support testing operations. On the blue Boeing 720B,
smaller test engines of up to 17,000 lbs of thrust can be mounted on
the port aft section of the fuselage. All three aircraft can have a
larger engine installed on an inboard, underwing pylon. One test
powerplant can be accommodated on each FTB. The B720Bs have electrical
load banks, which dissipate the power generated by the test engine,
installed on their upper fuselage (the metal panels). On the B747SP,
the load banks are on the lower fuselage.

Engine test
flights are typically six to seven hours long, and the FTBs fly in a
triangle of airspace between Mirabel, Chicoutimi and Val d’Or.
Cold-weather engine testing is done at Iqualuit (the main location),
Goose Bay or Churchill Falls. The FTBs are flown as testing
requirements dictate, which is approximately 600 hours per year for the
B720Bs and somewhat less for the B747SP. In terms of engine test
parameters, on the B720Bs, 500 temperatures, 250 pressures, 250 analog
signals, 32 digital channels and all normal electronic engine controls
signals can be collected. The test data capture capacity on the B747SP
is three times greater. Data is collected onboard and transferred to
P&WC’s computers after each flight. Helicopter turbine engines and
APUs are not flight-tested on the FTBs.

P&WC turbine engines
are also tested on the ground in test cells, where numerous structural
and performance tests must be performed in order for each powerplant to
be certified by Transport Canada and validated by the FAA and EASA
(European Aviation Safety Agency – formerly the Joint Aviation
Authorities). Agreements involving civil aviation regulatory agencies
allow P&WC to have its powerplants certified without having to
repeat engine testing in the US, Europe, or elsewhere.

While most
customers of P&WC engines are aircraft manufacturers, others
specialize in turbine conversions or upgrades. In the Jan./Feb. 2006
issue of Wings, an article written by myself reported on Rocket
Engineering’s turbine conversion programs involving Piper and Beech
piston aircraft. The company uses PT6A engines, which the president
described to me as “bulletproof.” A strong commitment to
technologyreadiness, supported by rigourous flight testing, has been an
important part of the work done by P&WC to make such powerplant
reliability possible.

The jet engine has been a part of aviation
for nearly seven decades, and the technologies and materials which have
been developed during that period have resulted in increasingly
fuel-efficient, dependable, and quiet turbine powerplants. Since the
PT6 first took to the skies 46 years ago, P&WC has continued to
improve its engine families and develop new products. The company’s
tradition of making significant investments in research and development
continues into the future. Already the No. 1 R&D investor in
Canadian aerospace, P&WC announced last year that it would invest
$1.5 billion over the next five years to develop the next generation of
technologies necessary to meet future product demands.

P&WC
has working relationships with Canadian universities and the National
Research Council of Canada to develop and take advantage of the new
materials and technologies that will be used in the aircraft of
tomorrow. As in the past, Pratt & Whitney Canada’s flying testbeds
will be employed to develop future turbine engines that will continue
the company’s longstanding tradition of providing customers with the
best that human ingenuity, hard work, and dedication to quality have to
offer.