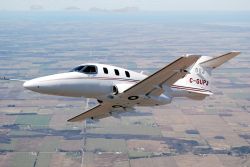 The aircraft departed from Diamond
Aircraft’s London, Ontario facility for a successful 1 hour and 25 minute
flight with Chief Test Pilot Daniel Ribeiro at the controls. The flight went
exactly as planned with completion of all test cards.

D-JET 003’s initial test program will focus on performance and handling
quality refinement, similar to the mission of previous Diamond D-JET flight
test aircraft, but will additionally be used to further develop key systems,
including avionics, fuel, autopilot, and anti-ice. Later this year S/N 003
will be retrofit with the Williams International FJ33-19 engine, to begin
testing with the production configuration powerplant.

The D-JET is designed specifically for the owner pilot, with attainability
from both a financial as well as pilot qualification perspective. The
combination of an extremely roomy cabin and three large baggage
compartments, with a familiar flight envelope (to FL250), the
FADEC-controlled FJ33 engine and the Garmin G1000 3-screen flight deck,
makes the D-JET the ideal Personal Light Jet, for pilots stepping up from
high performance piston singles, twins and light turboprops or downsizing
from expensive-to-operate, older, light business jets.

Diamond Aircraft is a leading manufacturer of modern composite aircraft, and
the only company to offer a full line of personal aircraft, from the DA20
two-seat trainer, to the DA40 family of 4-seat pistons, the DA42 light twin
turbo-diesel, the DA50 5-seat high performance single-engine, and the D-JET,
a 5-seat Personal Light Jet, as well type-specific flight training devices.
Diamond Aircraft operates factories in Austria, Canada and China, making it
the only GA manufacturer with a truly global operation.