The new DA50 RG has a useful load of just over 1,200 pounds and is rated for a fuel consumption of only 34.1 litres per hour at maximum range. Photo: Diamond Aircraft

Diamond Aircraft is among the three largest piston-engine aircraft manufacturers, globally, and aiming to wrestle away the top spot from Cirrus Aircraft within the next three years. This potential to put more Diamonds in the sky is fueled in large part by Diamond Aircraft’s North American operation in London, Ontario (Diamond North America).

To put the importance of the London facility into perspective, however, consider the Wiener Neustadt plant in December 2020 celebrated building its 500th single-engine DA40 NG, whereas Diamond North America has now produced more than 1,350 of the same aircraft. The Type Certificates for the DA40 (both the NG and Lycoming models) and multi-engine DA62 were moved to Canada in 2016. The London plant already held the Type Certificate of the DA20 C1, now accounting for more than 700 delivered aircraft – among more than 1,100 DA20s built in Canada.

The DA42 is the only Diamond plane not currently being produced in Canada, as well as the new DA50 RG, which in September 2020 received its basic Type Certification from EASA.

By the end of 2021, however, Diamond plans to establish a new production line in London to build the DA50 RG, featuring retractable gear, a highly anticipated arrival expected to mirror the timing of certifications from both the FAA and Transport Canada.

London and the fleet
Diamond Aircraft’s production presence in London measures 220,000 square feet, along with two 20,000-square-foot hangars, sitting on 55 acres of owned land with a taxiway and through-the-fence access agreement with London International Airport, as well as the Diamond Flight Centre and Katana Kafe building located at the runway end of Blair Blvd.

There is plenty of room to accommodate more production in London, but the new DA50 RG line will fit nicely into its existing footprint as Diamond prepares to increase its reliance on the available expertise and strong track record in Canada to eat into Cirrus’ market share.

“Cirrus really had us beat in the high-performance single market targeted at the private or owner-flown customers. The DA62 and new DA50 compete aggressively in this space,” says Scott McFadzean, CEO of Diamond North America, noting these two models provide Diamond with a portfolio stretching from private owners to charter operations. McFadzean has spent almost 20 years with Diamond’s London operation, progressing through a number of roles before his promotion to CEO in January 2018.

“We have private customers and business owners, who were typically buying a DA40 to learn how to fly or as their first airplane, because it is so docile and forgiving,” he says. “It’s a great airplane to learn to fly in; and to take your family in and be completely safe. But typically people will want to move up to a larger, faster airplane at some point and we only had the twin option in the Diamond portfolio.”

With the DA62 and DA50, McFadzean explains no competitor in General Aviation can serve all of the different segments like Diamond, from a two-seat VFR trainer and four-seat, single-engine IFR airplane for training, as well as the DA42 Twin, to the seven-seat “flying SUV” DA62.

The five-seat DA50 RG, which during its 2017 introduction was envisioned to include six- and seven-seat variants, shares family ties with the twin-engine DA62.

“The DA50 takes everything that we have done so well on the DA62 and matches it up into a single-engine configuration, with the same cabin and cockpit, just obviously with an engine on the nose versus [two] hanging off of the wings,” McFadzean explains, comparing their modern design to trends in the automotive sector. “It fills a niche we see [growing] in General Aviation… People want to have space to carry more, travel further and have that luxury, convenient and comfortable private travel experience.”

With its all-carbon-composite airframe, the jet-fuel burning DA50 RG has a useful load of just over 1,200 pounds and is rated for a fuel consumption of only 34.1 litres per hour (nine U.S. gallons) at maximum range – 750 nautical miles (1,389 kilometers).

“Diamonds are a luxury brand and our operators watch total cost of ownership and cost per flight hour closely,” McFadzean explains. “When you get into parts costs and maintenance costs, those are all competitive. But then looking at fuel savings is where we really run away with it; we’re burning not only 40 per cent less fuel, if you’re talking about the same horsepower gasoline engine, but also fuel that’s typically $1 to $2 cheaper per gallon.”

Safety and sales
Diamond a few years ago started an aircraft trade-in program, which ultimately led to its Certified Pre-Owned program where the factory replaces all parts that are less than 70% life limit, typically give the plane fresh paint and new interior, zero-time prop, and renewed factory warranty. 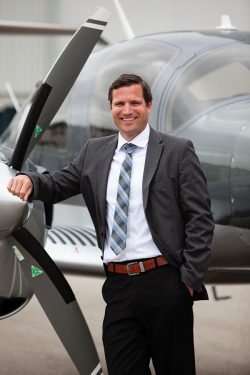 McFadzean explains trade-in activity typically aligns with TBO timelines, when owners might consider overhauling an engine. “It’s an affordable solution to purchase a new aircraft” McFadzean says. “It gives customers a lower entry point into an airplane that has been completely refurbished by the factory and goes out the door looking like new.”

Diamond is now moving away from a factory-direct sales model, once again taking on a distribution approach in North America. “We feel customers are best served with one dedicated person or company that can walk them through the buying decision,” McFadzean says. “They’ll help them deal with the trade, as well as take care of any of their servicing and parts or training needs. It’s really a one-stop shop for the customer to give them that higher level of service a dealership can offer.”

Headquartered at Oshawa Executive Airport, Aviation Unlimited is a Transport Canada AMO based out of Hangars 1 and 2 at Buttonville Municipal Airport. “Aviation Unlimited has been a strong partner of ours in the past… We’re very happy to have them serving the Canadian market,” says McFadzean. “They are going to represent the brand very well.”

One of the greatest strengths of the Diamond brand is safety, largely based on designing its initial platform more recently than most OEMs, using modern resources and what McFadzean again describes as modern automotive concepts. He outlines Diamond’s philosophy of active and passive safety.

“Active safety for us means how do we prevent the accident from happening in the first place; and that’s about aerodynamics and flight characteristics, so that when you fly a Diamond and you approach a stall, or you’re even in a fully developed stall, you do not have any nasty wing drops or coffin corners,” McFadzean explains, as an example. “It’s a very docile stall and you have full aileron control through the stall. It gets a bit soft, but you are able to turn and control the airplane.”

McFadzean explains Diamond’s handling characteristics provide active safety throughout all phases of flight, aided by a design with unobstructed views in the canopy and steel control rods that do not stretch or degrade over time.

“Probably the most revolutionary development of Diamond Aircraft was to put tremendous focus on protecting the fuel,” he says, as an example of the company’s passive safety measures to address a reality that not all accidents are preventable. “We designed a carbon-capped, dual wing spar and put aluminum fuel cells in between the spar with TSO stainless-steel braided fuel lines, none of which run through the cabin.”

McFadzean explains Diamond also leverages a 26 G safety cell, a design borrowed from the evolution of Formula One to protect the cockpit. He also points to Diamond’s longstanding development with Garmin, beginning with the DA42 serving as the launch aircraft for the G1000 avionics system.

“Now we’re into G1000 NXi on new aircraft and we continue to certify and unlock a number of very interesting features,” McFadzean says, describing glass-cockpit advantages for situational awareness. “We’re getting to the point where we’re showing all of the wires, telephone wires, power lines, in real time on moving maps. We will have 3D Audio where you can tell the direction of the voice… It will say, ‘Traffic, same altitude, two o’clock’ and the voice will come from two o’clock so that your head automatically turns. We’re trying to keep people from burying their heads in the cockpit.”

Even as advances found in the DA50 RG and DA62 allow Diamond to push into new Business Aviation segments, the company’s importance to General Aviation is not lost on McFadzean.

“It’s really the foundation of all things aviation. No pilot can fly anything until they start here,” he says. “The other thing that often gets overlooked in GA is just the ultimate kind of flexibility… Having a personal time machine and the ability to go anywhere you want.”  | W