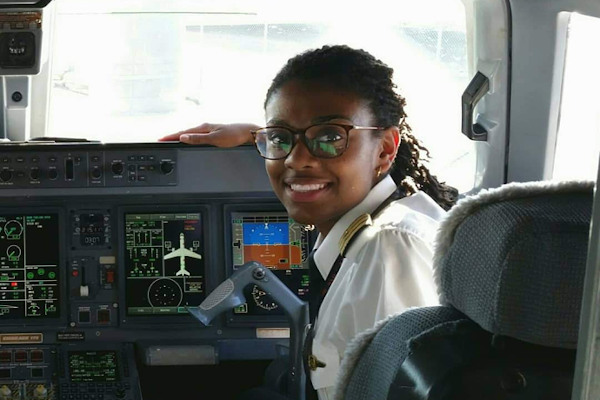 As the founder of an organization with a mandate to develop gender balance in the aviation industry through education and mentorship, I have been privileged to meet some incredible women who are forging a path in leadership. With the Black Lives Matter movement front and centre in our conversations today, it is important to understand, that while pushing for gender diversity in the aviation industry, we must also develop a voice to advocate for racial diversity.

The lack of women of colour in aviation was never more apparent to me than when I started a search to interview a black female pilot. I called all of my friends and industry contacts. I Googled. Finally, I found someone who could make an introduction. How could I possibly have to search so hard to find a black woman pilot in Canadian aviation?

Well – the digging was worth it because I uncovered a rare gift in Zoey Williams. At age 23, Williams is Caribbean-Canadian woman, who is poised, intelligent, beautiful and – best of all – inspirational. With few role models who looked like her, fighting her way through systemic challenges as a woman of colour in aviation was not easy, but as her father told her, “You have a responsibility to be a role model for other young girls like you. Hold your head high and encourage others to follow their dreams.”

In my commitment to learn more and contribute to the systemic change that must happen, I wanted to dedicate this space to amplify the voices of women of colour in aviation and to hear what someone from the black aviation community has to say about it. In early 2020, Williams was thrilled to be hired at an airline as a pilot on the A321, beginning with the effort to obtain her type rating. As the start date for her simulator training approached, Williams’ schedule was interrupted by the COVID-19 pandemic.

How did your journey in aviation begin?

Williams: I have been around aviation as a child through my father and living close to a flight-training school. I saw a lot of airplanes flying above the house. At a young age, I had little interest in aviation, but I wanted to become an engineer. After some encouragement from my father, we drove to the airport and I got into a Cessna for an introductory flight lesson. My introductory flight was during a day with some turbulence. I was uncomfortable and there was nothing to hold onto in the airplane. Being so high up made my knees shake and I felt sick to my stomach. Once the engine stopped and we were back on the ground, I thought to myself, “There is no way I am going back up there. You can forget about becoming a pilot!”

I went home and tried to push the experience to the back of my mind, but I could not. That was the first time as a young teenager that I felt paralyzing fear, but I knew this would not be the last time fear would enter my life. So, I had to make a decision to run from it or face it; and I knew this would set the tone for how I dealt with fear in the future. Through the mentorship and advice of my father, I mustered the strength to get back into a Cessna and I promised myself, that no matter what it took, I was going to become a pilot.

How long have you been flying?

I began my flight training in June 2012 and I started flying commercially in 2017.

Did you know you wanted to become an airline pilot from the beginning or where you pursuing other options?

At the beginning of my pursuit of a piloting career, I was only aware of job opportunities at the airline level. However, during my flight training, I obtained a float rating and fell in love with the idea of working in the float industry. I was told that I was too small to find a job in such a physically demanding position, but I was determined. After applying all across Canada in a competitive job market and phoning countless float operators, I was met with rejection after rejection.

During my search for a float position, I was told, that in this industry, having someone vouch for you is important and searching for a job would be difficult without it. Although I kept applying, I continued my pursuit of aviation by obtaining a flight instructor rating. I began flight instructing and continued to build my career in Northern Ontario. As I built rapport and a reputation for being a hard worker, I found more opportunities and even some operators asking if I would consider float flying. However, at that point in my career, I had shifted my focus back to airline flying.

You now work for an international carrier. How exciting does it feel to be training on the Airbus?

I am incredibly excited to have the opportunity to fly the Airbus. After getting the phone call about the job offer and I had to remind myself I was not dreaming. Although my type rating is on pause for the time being, I am enthusiastic to return to the flight deck soon.

The world is changing before our very eyes in 2020, initially with COVID 19, but now the Black Lives Matter movement has come to the forefront.

Do you know the percentage of black women pilots in Canada?

This year has undoubtedly challenged many people’s perception of the world we live in. The percentage of black women in aviation is a number I have wanted to know for some time. I have had no luck finding any published data on this specific demographic. I can only speak personally to my experience flying and I have met one other black female pilot working in Canada. I have had the pleasure of meeting other women of colour, who have an interest in flight training or have begun to pursue their training; and I look forward to sharing the flight deck with them in the future.

How do you think we can best increase diversity in aviation?

I believe that diversity in aviation can be increased through outreach and community involvement. I often meet young girls who have said, “I did not know that being a pilot was an option.” Representation is important and we need to encourage young women and minority groups… aviation is an option and a great one too!

Have you faced any racism in aviation; and what can be done to create change?

Yes – I have faced racism in aviation. First and foremost, we have to stand up when we see or hear racism or prejudice. When you hear something inappropriate stand up, say something, and if applicable follow the appropriate chain of reporting. Secondly, mentor young people of all different backgrounds and be involved in all different types of communities. Working together as a cohesive group is how we can create change.

I want this article to be a place to share your voice. What message do you want to share about diversity?

I would like to share that we are all stronger when we support and encourage each other. Now is the time for unity and to reach out to others. This year has been an opportunity to strengthen our understanding of each other and to continue moving forward together. I strongly encourage the idea of mentorship and community outreach to increase inclusion and diversity on all platforms.

Do you believe in the importance of mentorship? What advice can you give to any girls or young women reading this article who may be – for the first time perhaps – considering a career in aviation?

I certainly believe in the importance of mentorship. I have amazing mentors who encouraged and guided me during my career. My mentors have had a huge impact on my life; and I could not imagine my career without them.

The message I have for young women interested in aviation is you can do it and to believe in yourself. Do not let the doubts of others cause you to doubt yourself. You will be met with challenges in this career and I know the feeling of wanting to give up when things are hard, but you have to keep fighting. You are the future and you will have little girls that look up to you to represent them in this field. Wear your uniform with pride. Always study hard and do not believe anyone who tells you that you are incapable.

Kendra Kincade is the founder and director of Elevate Aviation, a non-profit dedicated to inspiring youth to pursue careers in aviation.