“The drone industry is hungry for solutions enabling it to be taken into the mainstream, which demonstrate how drones can be managed safely, especially in and around areas where misuse could cause disruption.” 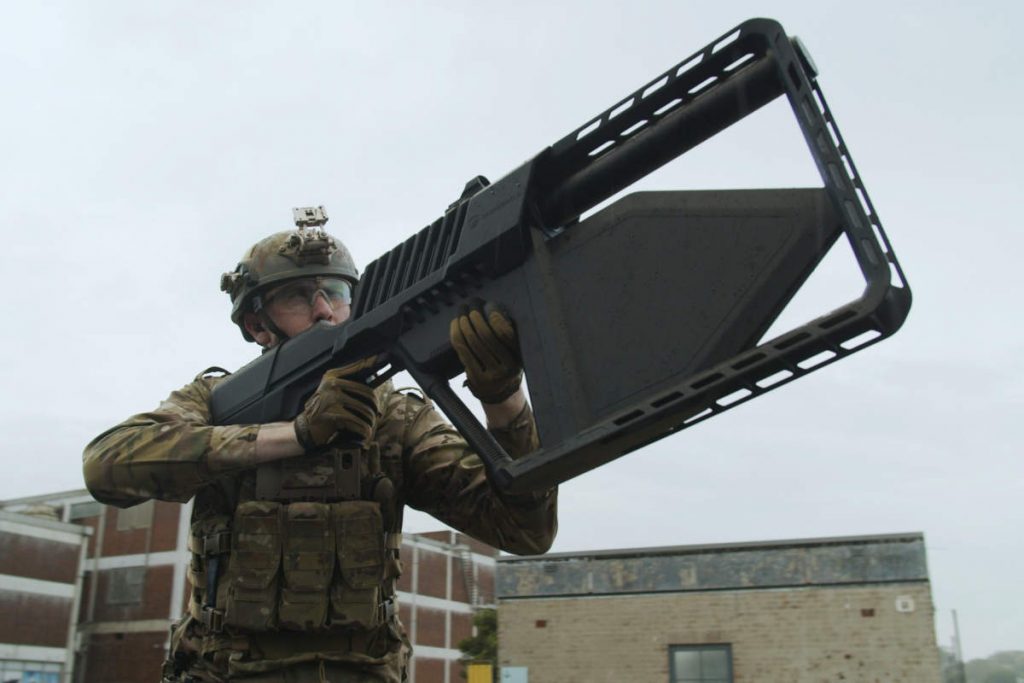 The DroneGun Tactical gun, developed by DroneShield, is a long-range (up to 2km), portable countermeasure that can force a threatening drone into a vertical controlled landing on the spot or return it to a starting point for tracking the operator. (Photo: DroneSheild)

DroneShield Ltd., headquartered in Sydney, Australia, on July 29 became the first counterdrone technology company to be accepted as a member of Airports Council International (ACI) Europe, which represents more than 500 airports in 45 European countries. News of the Australian company’s ACI membership boosted its share price by 14 per cent by end of trading on July 30 – albeit a relatively small jump starting from 26 cents (AUD) per share before hitting 30 cents.

Association memberships aside, DroneShield signed two key counterdrone partnerships over the past week, focusing on product-integration deals with Altitude Angel, one of Europe’s leading Unmanned Traffic Management (UTM) system providers, and Bosch, one of the world’s largest security systems developers.

In partnership under the formal Bosch Integration Partner Program, DroneShield is now offering an integrated system for drone detection and mitigation, leveraging the video surveillance products developed by Bosch Security and Safety Systems. This product integration is complete and now available.

Bosch’s surveillance systems are used across a range of industries from prisons and airports to critical city infrastructure programs. “Drone security is becoming a rapidly increasing problem for our existing and prospective customers across the sectors, and we expect DroneShield’s capability to service this emerging need,” said Hsiang Nung Kuah of Bosch’s Security Business Unit.

DroneShield’s new agreement with Altitude Angel focuses on the complex challenge of integrating Unmanned Traffic Management (UTM) systems into the controlled airspace of airport operators and governments. Its GuardianUTM traffic management system is being deployed by NATS, the UK’s main air navigation service provider. Now, DroneShield and Altitude Angel will offer an integrated product to provide what the companies describe as “single-point situational awareness” to manage airspace.

“The drone industry is hungry for solutions enabling it to be taken into the mainstream, which demonstrate how drones can be managed safely, especially in and around areas where misuse could cause disruption,” said Toby Potter, VP of sales, Altitude Angel.

DroneShield explains that by clearly distinguishing between known (authorized operations) and unknown (potential threats) drones, operations are able to respond to air traffic incursions without disrupting other authorized activities – an ongoing problem that was recently highlighted in December 2018 when hundreds of flights were cancelled at Gatwick Airport in the UK, following reports of drone sightings near the runway.

The BBC reported that the resulting chaos, lasting for three days, affected approximately 140,000 passengers and 1,000 flights – describing it as the biggest disruption to Gatwick Airport’s operations since ash from an Icelandic volcano in 2010.

“Almost daily airports around the world are seeing drone incidents endangering the safety of thousands of passengers and causing tens of millions of dollars in economic damage,” said Oleg Vornik, CEO, DroneShield. “Civil infrastructure operators are in need of an urgent solution.”