EADS SOCATA Chairman and CEO Jean-Michel Léonard handed over the TBM 850s during a delivery ceremony at Florida’s Orlando Executive Airport, which was attended by more than 200 guests and included presentations by performers from the Cirque du Soleil and Nova Era orchestra, concluded by a fireworks finale.

“Today’s event culminates a major effort by EADS SOCATA to build on the TBM 850’s already considerable success, further enhancing this aircraft’s operability and capability in response to customer demand,” Léonard said. “Our work doesn’t stop here. EADS SOCATA’s top priority will continue to be customer satisfaction, and we will intensify our efforts to increase customer service. In addition, we want to expand our core U.S. market while also increasing the TBM 850’s presence in other regions of the world.” 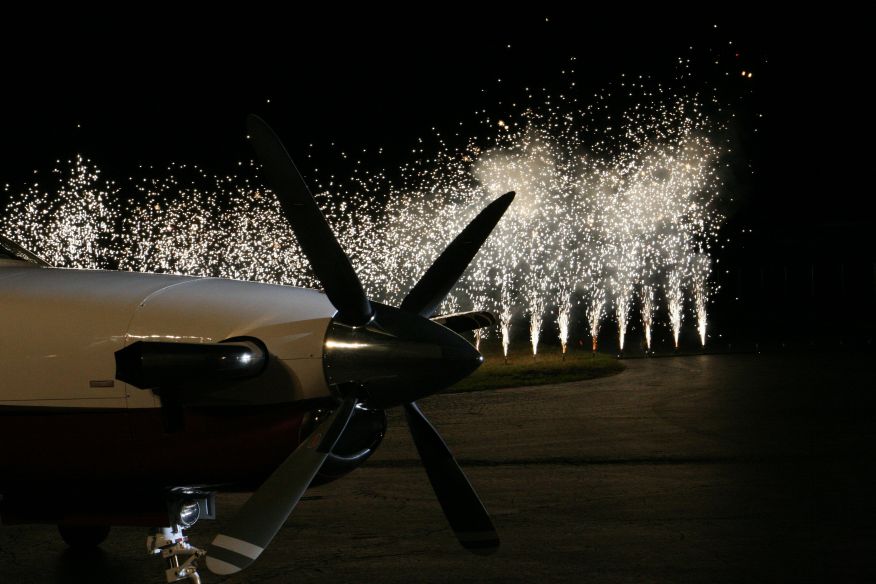 Upgrades in this latest variant of the popular TBM850 include an integrated all-glass flight deck based on the last-generation Garmin G1000 system – which replaces traditional instruments with large liquid crystal display (LCD) screens. It integrates primary flight, navigation, weather, traffic, ground proximity and technical information on the aircraft, fully associated with a digital autopilot. This reduces pilot workload and eases maintenance. As a result, the TBM 850 is now one of the world’s most advanced light business aircraft.

The first 2008 TBM 850 was received by John LaBonte, the Chief Executive Officer of Big Bike Parts, a leading designer and distributor of touring motorcycle accessories based in Rice Lake, Wisconsin. LaBonte participated in the TBM 850’s ferry flight to Florida, having completed his training on the new aircraft at EADS SOCATA’s Tarbes, France production facility.

Today’s ceremony comes one week after the TBM 850’s public unveiling at Tarbes, which was followed by the departure of the first two aircraft to the United States – the largest market for this six-seat business transport.

“Last week’s official public debut of our new TBM 850 definitely boosted its already strong product recognition,” explained Nicolas Chabbert, the President of EADS SOCATA North America. “We have surpassed the 60 aircraft order total for this year, which locks in the entire 2008 production. We are now into 2009 for the next available delivery slots.”
Chabbert underscored the TBM 850’s speed and “eco-efficiency,” which brings together two key features for owners and operators. “The TBM 850 is proving to be the perfect solution for the pilot/owner group segment, and we clearly anticipate it will attract other market sectors, such as small business and on-demand operations.”
Renowned aerobatic champion Mike Goulian was the guest of honor at today’s delivery ceremony, describing his impression of the new aircraft’s features to the audience after flying as the 2008 TBM 850’s first guest pilot.

“The Garmin G1000-equipped TBM 850 with its digital autopilot is fascinating and amazing,” said Goulian who is a turboprop charter pilot in addition to his aerobatic activities. “The TBM 850’s cockpit layout is superb and well engineered. This is the most advanced turboprop I have ever flown, and the handling characteristics are close to fighter aircraft I have had the opportunity to fly. It’s a phenomenal aircraft with its speed, sturdy structure and incredible stability.”
The TBM 850 is world’s fastest single turboprop aircraft, with a maximum cruising speed of 320 KTAS at flight level 260 (in ISA conditions). It combines cruising speed and trip times of a light jet with the economic direct operating costs, range and moderate environmental signature of the turboprop engine. Its maximum range and useful load, enhanced on the new model, its ability to land on small airports are some of its customer’s favorite features.

EADS SOCATA is one of the world’s leading general aviation manufacturers, with more than 17,000 aircraft built since its creation as Morane-Saulnier in 1911. Current products include the TBM family of high-speed turboprops, TB GT piston aircraft, aerostructures for Airbus civil airliners, the A400M military transporter, Dassault Falcon jets, Eurocopter helicopters and Embraer regional jets. EADS SOCATA is expanding its customer service activities, to support its growing fleet of TBM and offer its light aviation expertise for aircraft below 5.7 metric tons through avionics modernization, maintenance, repair and overall package offers. Headquartered in Tarbes, France, with North American operations in Pembroke Pines, Florida, EADS SOCATA is a wholly-owned subsidiary of EADS group.