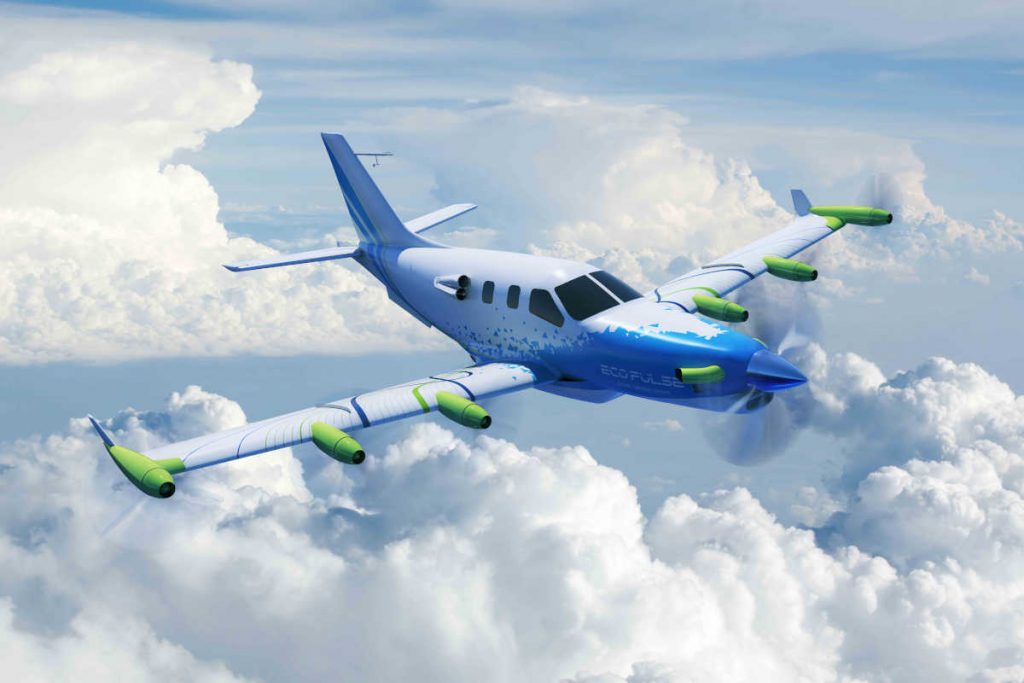 Daher expects to begin the EcoPulse demonstrator’s assembly in 2021 with first flights planned for 2022. (Photo: Daher)

The EcoPulse distributed propulsion hybrid aircraft demonstrator passed its Preliminary Design Review as a key first step toward validating the program’s feasibility and beginning assembly. The aircraft’s developers, including Daher, Safran and Airbus, with the support of France’s CORAC civil aviation research council, are aiming for first flight in 2022.

EcoPulse was unveiled at the 2019 Paris Air Show with the goal of incorporating a distributed propulsion configuration with contributions from all three developers, Daher, Safran and Airbus.

Daher explains EcoPulse can lay an environmentally progressive framework for light aircraft by the end of the decade, which can then be applied in future commercial aircraft and ultimately contribute to the air transportation sector’s decarbonization objectives by 2050.

EcoPulse’s Preliminary Design Review (PDR) over the past year was based on a light aircraft platform supplied by Daher. The French aircraft maker explains the completed PDR now allows for the validation and freezing of the demonstrator’s baseline configuration, as well as confirming the hybrid distributed propulsion system’s level of safety and compatibility with the aircraft.

The project is now entering the assembly and integration phase at Daher, with systems supplied by Safran and Airbus, at its Tarbes, France site, where the initial components were designed and delivered. The start of final assembly is planned for late 2021.

“With this demonstrator, Daher intends to develop the key architectural principles for future hybrid aircraft,” said Pascal Laguerre, Daher’s Chief Technology Officer. “The project reaffirms our commitment, as a general aviation manufacturer with our Kodiak and TBM product lines, to more efficient and eco-responsible aviation.”

Safran, which is responsible for EcoPulse’s distributed hybrid-electric propulsion system, has finalized the technical configuration of its six electric thrusters. They will be fitted with 50 kW ENGINeUS electric motors with integrated electronics and patented air cooling, as well as propellers supplied by DUC Hélices. The Safran ENGINeUS motor will be submitted for EASA certification – the same type as granted for a turboshaft engine.

Also validated by Safran are the installation interfaces for the propulsion system’s other components, along with the power management system, the turbogenerator and the high-voltage wiring that will supply electrical power to the thrusters. Daher states the turbogenerator, which performed its first test bench runs in 2018, will soon undergo additional tests.

The next step for Safran, according to Daher, will be its delivery of an initial electric thruster to Airbus for wind tunnel and endurance testing, in preparation for qualification of the thrusters’ use on EcoPulse’s first flight.

“EcoPulse is an ambitious project, and designing hybrid propulsion on this new aircraft architecture is a key skill that Safran is proud to master,” said Stéphane Cueille, Senior Executive Vice President and Chief Technology Officer, Research & Technology and Innovation at Safran.

Completion of the EcoPulse preliminary design review enables Airbus, which is currently involved in the demonstrator aircraft’s aerodynamic modeling, to schedule the start of wind tunnel testing for propeller/nacelle assembly during the first quarter of 2021. The electric engine, supplied by Safran, will be tested as well.

Daher notes the results of these tests will enable the identification of the propeller’s performance characteristics when associated with an electric engine, and validate the engine cooling process. In addition to these wind tunnel tests, Airbus also is planning to simulate the nacelle’s aerodynamic behaviour.

“The EcoPulse demonstrator program, initiated by CORAC with the support of the French DGAC civil aviation agency, is an important step in our ambition to decarbonize the aeronautical industry,” said Jean-Brice Dumont, Executive Vice President Engineering, Airbus. “It will allow us to study how distributed hybrid propulsion could be integrated into the aircraft of tomorrow and significantly reduce their environmental impact.”