News Products
Electronic Flight Bags: The 21st-Century Answer to Paper in the Cockpit

You wouldn’t rely on a handheld compass to navigate an aircraft. So why would you clutter up the cockpit with paper logbooks and manuals? 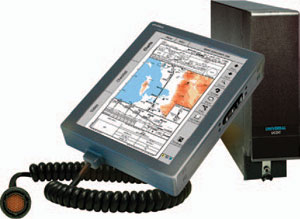 It’s a good question, given that the alternative – Electronic Flight
Bags – are as superior to paper as 21st century avionics are to
handheld compasses. With the right Electronic Flight Bag – ‘EFB’ for
short – you can carry all the Type A flight information and technical
documentation you need in a small electronic package; no books and bags
required! Better yet, the most sophisticated EFBs – known as Class III
EFBs – can provide a pilot with GPS-based ‘own-ship tracking’ during
flight on an electronic ‘moving map’; and even connect to a Flight
Management System (FMS) to help monitor and record the aircraft’s
overall performance.

Of course, since Class III EFBs have to be
certified as ‘avionics grade’ and be capable of running DO-178B Class C
or higher software, they are priced out of reach for most pilots.
Still, Class I and II EFBs are no slouches: Beyond carrying all the
applications listed above, many Class I and II EFBs will run Jeppesen
charting programs such as JeppView FliteDeck; WSI InFlight real-time
weather (delivered by satellite to an airborne receiver), weight
calculation formulas, fault messaging, and even provide cabin
surveillance, provided that they are connected to in-cabin video
cameras. In addition, Class II EFBs with appropriate interfaces such as
ARINC 429 and/or RS232 can receive information from the FMS/GPS to
provide centred moving map displays (without own-ship position
depicted), aircraft position information for real-time weather
applications, and can automatically display approach and terminal
charts for airports logged in as departure and arrival locations.

THE THREE CLASSES OF EFBS
So what does all this talk about Class I, II, and III EFBs mean in plain English?

A
Class I EFB is typically a COTS (Commercial Off the Shelf) laptop
computer, tablet PC, or perhaps even a highend PDA that has been loaded
with Type A software. This means you can take the Class I EFB along
wherever you go. However, the fact that it is portable means a Class I
EFB must be stowed during landing and takeoff. In flight, you may end
up with it sitting in your lap, for easy access.

A Class II EFB
is similar in functionality to a Class I EFB: The difference is that a
Class II EFB is physically mounted in the cockpit (which keeps it off
your lap). The obvious advantage is that a Class II EFB can be used in
all phases of flight, including takeoff and landing. In addition,
unlike Class I EFBs, Class II EFBs can be purchased as softwareloaded
laptops/tablet PCs, or ‘purpose-built’ EFBs designed to suit a pilot’s
habits.

A case in point is the PilotView Class II EFB, which is
built by CMC Electronics of Montreal. Basically a ‘purpose-built’
tablet PC with a colour LCD display, CMC Electronics’ EFB controls are
“based on standard avionics design,” said Gulfstream senior
experimental test pilot Tom Horne. This is why Gulfstream has installed
the predecessor of the PilotView (the CT-1000 G) as standard equipment
in its IVs and GV-SPs and is currently in the midst of certifying CMC’s
new PilotView EFB. “You don’t want to struggle with a different input
style when you’re busy in the cockpit,” Horne said.

As for Class
III EFBs? Given that they are permanently integrated into the
aircraft’s avionics systems, Class III EFBs are really a form of
avionics system. This is why they require regulator certification for
installation and use: It is also why Class III EFBs can offer such
useful systems as ‘own ship’ tracking in real time.

WHO CAN USE EFBS?
Not
surprisingly, a search for EFBs on the Web will often lead to sites
associated with business jets. However, EFBs are just as useful for
propeller and rotary-wing aircraft.

In fact, the only real
limiting factor is the level of sophistication within the aircraft
itself. A vintage aircraft with electromechanical avionics won’t
integrate to an EFB of any class, while a glass-cockpit aircraft will
work with all of them.

WHY EFBS ARE A GOOD CHOICE
For
sheer simplicity of use, an EFB makes more sense than toting around 30
pounds of paper and books in an actual flight bag. If you own a Class I
EFB, for instance, the weight load is far less. If your aircraft is
equipped with a Class II or III EFB, the weight you’ll be carrying
around will be reduced to nil.

Beyond weight, the readers loaded
on EFBs can access the documentation you need far quicker than
searching through a manual, especially if you’re in the midst of an
in-flight crisis. Meanwhile, being able to see real-time weather on
your EFB’s LCD screen could prove to be a lifesaver for any pilot.
Certainly it beats trying to create a mental picture of verbal reports
in your head, or relying on dated weather maps obtained before takeoff.

PRICES AND SOURCES
How
much should you expect to pay for an EFB? It really depends on the
class you are buying, and the amount of capability you are looking for.
Software such as JeppView FliteDeck is extra.

“The Motion is strictly a Class 1
EFB and can’t be used for charts in jet aircraft,” said Jeffery Geraci;
ADR’s vicepresident of business development. “We have the Motion as a
Class 1 for the piston folks who want a dualuse computer. [But] we do
not sell them into business aviation at all.”

In the Class II
range, CMC’s PilotView carries a list price of US$18,500. However,
dealers such as Mid-Canada Mod Centre in Toronto or ABC Completions
just outside of Montreal typically sell it for less. The PilotView
comes with a 8.4" colour AMLCD screen, an Intel Centrino processor with
512 MB memory, touch-screen, avionics-style buttons for easy
navigation, and a keyboard that slides out of the display’s housing.

Finally,
if you have the money for a Class III EFB, you may want to look at
Universal Avionics Systems Corporation’s Universal Cockpit Display.
Priced at US$34,500, the 8.4" LCD colour touchscreen UCD can do
own-ship tracking because it is integrated with the aircraft’s FMS. As
well, the FMS will automatically trigger the UCD to display approach
and terminal charts for airports logged in as departure and arrival
locations.