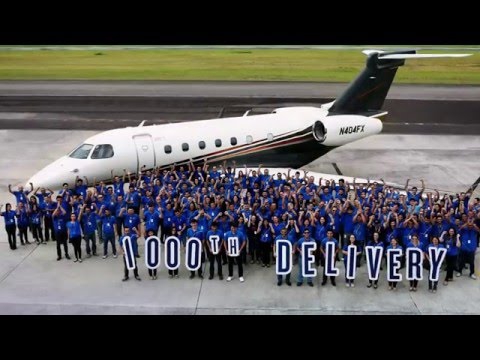 This significant landmark occurs a little more than a decade after the company fully committed to the business aviation market, establishing a new standard by designing products that brought game-changing features and amenities from larger business jets to the entry-level segment.

“I’m thrilled to celebrate this milestone with our global team. In a remarkably short period we have populated the business aviation market with the most advanced and reliable aircraft in the industry. Delivering 1,000 business jets to more than 60 countries in just over a decade reflects our strong ability to listen to our customers and respond to them with innovative solutions for different needs,” said Marco Tulio Pellegrini, president and CEO of Embraer Executive Jets. “We are especially pleased to celebrate this important achievement with our distinguished customer, Flexjet, which has honoured us with their trust since we first entered business aviation.”

Embraer Executive Jets’ 1,000th aircraft, a midsize Legacy 500, is the fourth of its kind to join the Flexjet fleet and is part of a firm order for both Legacy 500 and Legacy 450 jets. Flexjet offers travellers access to the world’s most luxurious fleet of private jets. Its fractional program fields an exclusive array of business aircraft — some of the youngest in the fractional jet industry — including Embraer Executive Jets’ bestselling Phenom 300.

“Embraer’s Legacy mid-sized aircraft are a natural progression for us since they meet a growing demand for jets with larger cabins, longer range capabilities and industry-leading operating economics,” said Michael Silvestro, Flexjet’s chief executive officer. “As part of the Red Label by Flexjet fleet, the Legacy 500 and 450 will effectively deliver the speed, luxury and performance our Owners expect.”

The Journey of Embraer Executive Jets
Embraer’s first business jet program, the Legacy, was officially launched in July 2000 during the Farnborough Air Show (U.K.) and the first aircraft was delivered two years later.

The aircraft was built on the robust and successful ERJ-135 regional airliner platform and featured an executive interior, in-flight access to the largest baggage compartment of any business jet at the time and the robust standards of commercial and military aviation that Embraer brought to the business market.

The company in 2005 reaffirmed its commitment to the market with the creation of a new business unit specifically for business aviation. This also marked the implementation of Embraer’s highly successful diversification strategy.

Embraer Executive Jets was established to provide integrated solutions to support both the Legacy program—later renamed the Legacy 600—and the development of a broad portfolio of innovative and revolutionary jets. The goal set forth was to become one of the leading manufacturer’s in business aviation by 2015, through innovative and differentiating products and services, adding value to customers and shareholders.

Since the launch of the Phenom jets in 2005, their global acceptance has reflected Embraer’s commitment to meeting the market’s and customers’ needs. Deliveries of the Phenom 100 and the Phenom 300 started at the end of 2008 and 2009, respectively, and both aircraft quickly became the industry’s most-delivered business jets and leaders in each of their categories.

Validating the suitability of the Phenom jets to fulfilling all of business aviation’s requirements — be it fractional ownership, charter, owner-pilot, corporate use, pilot training or employee shuttle – more than 320 Phenom 100s are currently in operation in 37 countries and more than 330 Phenom 300s are operating in 25 countries.

Embraer Executive Jets’ flagship aircraft, the Lineage 1000E, was unveiled in 2006 and the first delivery followed three years later. The ultra-large business jet, which is based on the Embraer 190 commercial jet platform, features five distinct zones with 752 sq. ft. for up to 19 passengers to enjoy a variety of ambiences for lounging, dining, conferencing or relaxing.

In addition to the many available configurations, the Lineage 1000E also boasts the largest in-flight-accessible cargo compartment in the market, a particularly useful resource that ensures the aircraft is the optimum office in the sky or home away from home. A global fleet of over 20 Lineage 1000Es connects the world’s key business centres as the largest executive jet to meet the wingspan restrictions and 100,000-lb. weight limit imposed by the more exclusive business aviation airports, such as Teterboro, NJ, or those like London City that require steep-approach capabilities.

In 2009, Embraer Executive Jets launched the large Legacy 650, which was based on the successful platform of the super-midsize Legacy 600. Featuring three cabin zones and a complete galley, the Legacy 650 also offered the added benefit of longer range and seating for up to 14 passengers. Cabin comfort was enhanced with a state-of-the-art sound insulation package and the high-speed Internet datalink was upgraded to Inmarsat’s SwiftBroadband System. The Legacy 650 was also equipped with Honeywell’s new Primus Elite avionics suite, a feature that later was introduced to the Legacy 600. Continued improvements to both aircraft continue to sustain their superior value proposition.

Embraer Executive Jets solidified its position as a leading business jet manufacturer with the launch of the Legacy 450/500 program, which consists of two highly advanced aircraft for the midsize market. Both aircraft feature a best-in-class six-foot-tall flat-floor cabin and in-flight entertainment system with a high-definition video system, surround sound, multiple audio and video input options, a cabin management system and three options for voice communications and connectivity.

Together, Embraer Executive Jets’ four Legacy models account for more than 300 aircraft in over 20 countries.