Dec. 1, 2008 - Sao Jose dos Campos, Brazil - Embraer showcased its alcohol-powered Ipanema aircraft at the “International Biofuel Exposition”,  held at the Hyatt Hotel, in Sao Paulo, Brazil, November 17 to 21. The Exposition was run simultaneously to the “1st International Conference on Biofuels” which run under the theme of “Biofuels as a vector of sustainable development.”

“Embraer believes that the growth of the aviation industry will use sustainable biofuels in the mid- to long-term,” said Satoshi Yokota, Executive Vice-President, Strategic Planning and Technology Development of Embraer. “That is why the Company invests in research and development of environmentally efficient products, including biofuels. The Ipanema is proof of that fact, and is the first airplane in the world to be produced in series that is certified to fly on alcohol.” 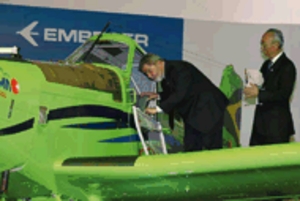 The objective of the event was to contribute to the international discussion of the challenges and opportunities presented by biofuels, and was attended by representatives of governments, international agencies, lawmakers, the scientific and academic community, private enterprise, corporations and NGOs, among others.

As the leader of the Brazilian agricultural market, with around a 75 per cent share, the Ipanema is manufactured by Embraer and sold by Neiva, a wholly owned subsidiary of Embraer located in the city of Botucatu, in outstate Sao Paulo. After 35 years of uninterrupted production, over 1,000 units have been delivered.

The Ipanema aircraft is a crop-duster, and it can also be used to fight fires, pull gliders, and for other applications. Originally gasoline-powered, the Ipanema is the first series airplane in the world to be certified for flying on alcohol. Since 2005, 54 of the alcohol-powered models have been delivered, totaling a fleet of 224 flying in Brazil with this type of fuel, which is two or three times cheaper than aviation fuel. Alcohol improves the overall performance of the airplane and reduces operating and maintenance costs, as well as having a considerably lower impact on the environment. 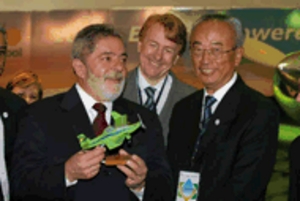 This is one of the practices implemented by Embraer in recent years, in order to ease the emission of greenhouse gases and other environmental problems. Therefore, the Company was the first in the worldwide aviation industry to receive ISO 14001 environmental certification, which stands in witness to correct environmental practices.