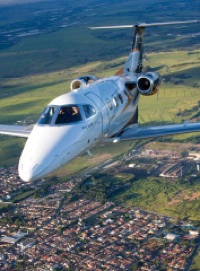 The Company will be at the annual event for the first time, exhibiting the entry level Phenom 100 executive jet (photo), which entered operation in December 2008. Tens of thousands of aviation enthusiasts will gather to watch pilots from across the U.S. and around the world prove their air racing prowess during one of the most prestigious air racing shows. During the same year in which the Embraer celebrates its 40th anniversary, marking a 30-year presence in the U.S., the Company will debut at this traditional event.

“Embraer is very pleased to be at the 46th Reno National Championship Air Races and Air Show for the first time,” says Ernest Edwards, Embraer Vice President, Marketing and Sales, USA, Canada, Mexico and the Caribbean – Executive Jets. “We are particularly delighted to showcase the Phenom 100, the fastest entry level jet available, at the world’s fastest motor sport event.”

About the Reno National Championship Air Races and Air Show
The National Championship Air Races and Air Show in Reno features six classes of aircraft: Biplane (small, aerobatic aircraft racing on a 3.1-mile course at speeds reaching 250 mph or 400 km per hour), Formula One (built according to strict technical specifications), Sport (high-performance, commercially available kit-built aircraft), AT-6 ("stock" T-6 Texan, Harvard, or SNJ aircraft), Jet (racing on an 8.4-mile course or 13.5 km), and Unlimited (open to any piston-driven aircraft with an empty weight greater than 4,500 pounds or 2,040 kg).

The Reno Air Racing Association (RARA) has announced that all six racing classes are
already full. The 2009 edition boasts one of the most experienced and skilled groups of pilots in the event’s 46-year history. Besides the high-powered racing events, the Air Show will feature the U.S. Navy Blue Angels, in their first appearance in Reno since 2000, as well as other aerobatic performances.