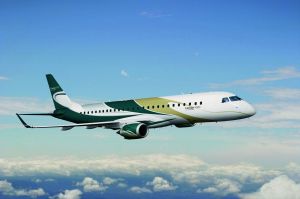 The STC is for the jet’s interior, which was designed, manufactured and installed by PATS
Aircraft Completions, a subsidiary of DeCrane Aerospace, located in the United States.
“We are pleased to announce the certification of the Lineage 1000 by the FAA, confirming all
the excptional characteristics previously approved by ANAC and EASA,” said Luís Carlos
Affonso, Embraer Executive Vice President, Executive Jets. “One of the great achievements
of this project regards to the maximum range of the aircraft, which was extended to 4,500
nautical miles, giving operators new possibilities for routes and destinations.”

Launched in May 2006, the Lineage 1000 is the largest and most refined executive jet in
Embraer’s portfolio. The aircraft is based on the EMBRAER 190 commercial jet, which was
certified in August 2005. It is one of four members of the E-Jets family, which now operates
in 35 countries and has flown more than 2.2 million hours.
The certification confirms the Lineage 1000’s maximum takeoff weight (MTOW) of 120,150
pounds (54,500 kg), and authorizes the jet to operate under Extended Operations rules
(ETOPS 120). This clearance demonstrates the aircraft’s capability of flying routes that have
a diversion airport up to 120 minutes from the flight path. Therefore, the Lineage 1000 can fly
long distances over oceans, deserts and other inhospitable areas, thus increasing its operational
range, anywhere in the world.
Approval has also been granted for the newly designed auxiliary fuel system, which is compliant
with the latest SFAR 88 safety requirements and is seamlessly integrated with the state-of-the-art
Honeywell Primus Epic® avionics suite, where automation reduces pilot workload.

The STC validates the modifications in the fully customizable executive jet interior, the
inflight accessible cargo compartment, and the oxygen system.

The Lineage 1000 jet was primarily designed for comfort and luxury. The aircraft can be
configured to accommodate up to 19 passengers in a total cabin volume of 4,085 cubic feet
(115.7 cubic meters). The interior, designed in a partnership with London-based Priestman
Goode, offers five distinct privacy zones and two lavatories. A third lavatory and a stand-up
shower unit are optional.

The aircraft’s cabin is outfitted by PATS Aircraft Completions, a division of DeCrane
Aerospace, located in the United States, featuring the most refined materials in its category. A
wide variety of cabin configurations fits all traveler needs with plenty of room for work, rest
and meetings. Besides the optional Electronic Flight Bag (EFB), there are such optional
amenities as Wi-Fi technology and Internet access, plus other features.
The total baggage capacity is 443 cubic feet (12.54 cubic meters). A large, pressurized aft
baggage area, which is conveniently accessible during flight, is more than twice the size of
baggage compartments on competitive jets. The integrated Honeywell Primus Epic® avionics
suite comes with five Liquid Crystal Display (LCD) multifunction control screens, Cursor
Control Device (CCD), auto throttle, weather radar with turbulence detection, fly-by-wire,
and other cutting-edge technologies.

Born for the demands of commercial aviation, the Lineage 1000 platform is based on the
EMBRAER 190 and is designed for quick turnaround, top performance, high use, and low
maintenance. The aircraft’s reliability is proven by more than 2.2 million flight hours, and
refined by the latest engineering.

The Lineage 1000 executive jet recently won the IDEA/Brasil design award, which is the Brazilian
version of the IDEA/USA Awards – one of the most prestigious design prizes in the world.
Priced at US$ 42.95 million, based on January 2006 economic conditions, in its baseline
configuration for FAA certification, the Lineage 1000 jet is expected to enter service in the
first semester of 2009.