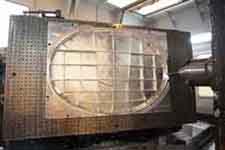 “This first metal cut for the Legacy 500 executive jet is an
important milestone in the program’s progress,” said Luís Carlos Affonso,
Embraer Executive Vice President, Executive Jets. “We are solidly committed to delivering revolutionary jets that
provide best-in-class performance and comfort. The Legacy 450 and Legacy 500 are
the only airplanes in their categories to offer a full fly-by-wire system and a
standup flat-floor cabin.”

This first component manufactured by Embraer is part of
the forward fuselage, on which the radome, radar, and glide slope antenna are
attached. It was milled from a plate of aluminum alloy by a five-axis
high-speed machine. The process was fully integrated with the digital mock-up, from
which the design data were extracted and converted into a numeric control
program that was then loaded into the machine. The surface of the part was also
treated and was checked with a coordinate-measuring machine before moving on to
the assembly process.

“Designed with the latest CATIA engineering software
(V5), the Legacy 500 program benefits from the intensive use of digital
manufacturing tools for the production of metallic and composite parts, as well as assembly simulations,” said
Artur Coutinho, Embraer’s COO.

The main structure of the jets will be built from aluminum
alloy, with a substantial content of composite materials. In the production
process, there will be a considerable increase in the use of robots, and TWI
friction stir welding technology will be used for the first time at Embraer in
a production aircraft.

The Company will adopt a multi-site industrial strategy
for the production of parts and major structures of the new jets. Sonaca,
Alestis, Ducommun, and SLCA are key structural suppliers. The final assembly,
as well as completion and painting will be done at the São José dos Campos
plant.