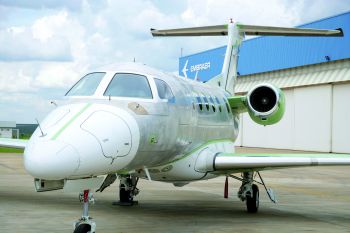 April 14, 2008, São José dos Campos, Brazil – Embraer finished assembling the first Phenom 300 jet
at its Gavião Peixoto plant in São Paulo, Brazil, on April 12. The rollout precedes a series of
ground tests to be conducted in preparation for the jet’s first flight. Moreover, the final
assembly of the second Phenom 300 has already begun at the same plant.

“We are thrilled to see the Phenom 300 become a reality,” said Luís Carlos Affonso,
Embraer executive VP Executive Jets. “The Phenom 300, with its premium
comfort, best-in-class performance and low operating cost, will set a new standard for the
Light Jet category.”
“The roll-out of the first Phenom 300 is a rewarding achievement, a direct result of the
unwavering commitment and relentless drive of our engineering, manufacturing and quality
teams,” said Henrique Langenegger, Embraer VP, programs – executive jets.

“Over 400 engineers were commissioned to the Phenom 300 program. The deployment of state-of-theart
technologies enabled a paperless design process, efficient integration of over 50 suppliers,
serial production tooling for the very first aircraft, and fully-digital quality assurance.”
Only ten months after the Phenom 100 rolled out in June 2007, the Phenom 300 rollout
occurred. The first metal cut of the Phenom 300 took place in late March 2007, with wings
and engines installed at the end of February 2008. March 2008 saw the first electrical poweron.
The sub-sections were assembled at the Botucatu plant. Different from the Phenom 100,
the Phenom 300 went through final assembly at the Gavião Peixoto plant, where the
program’s test campaign will also take place.
Phenom 300 rollout, on April 12, at Embraer’s Gavião Peixoto plant

About the Phenom 300
Premium comfort, outstanding performance and low operating costs are key design drivers for
the Phenom 300 best-in-class jet. With the interior designed by BMW Group
DesignworksUSA, the aircraft will offer pilots and passengers the comfort and style previously
unknown in its categories. The relaxing ambience is enhanced by generous windows and the
most ample cabin in its class. Onboard conveniences include a wardrobe or refreshment center,
an aft cabin private lavatory with toiletry cabinet, and satellite communications.
The pilot-friendly cockpit and the docile flying qualities of the new aircraft will enable singlepilot
operation. Drawing from Embraer’s design and engineering experience, the Phenom 300 is
designed for high utilization and availability. For added safety and reliability, the jet will offer a
standard anti-skid brake-by-wire system.
Based on Garmin’s all-glass, fully-integrated avionics suite, the Prodigy® flight deck offers
Phenom 300 jet operators more advantages than any other avionics suite on today’s market.
The cockpit features three interchangeable 12-inch displays – two Primary Flight Displays
(PFD) and one Multi-Function Display (MFD). The system integrates all primary flight,
navigation, communication, terrain, traffic, weather, engine instrumentation, and crew-alerting
system data and presents the composite information in brilliant, sunlight-readable color on
three high-definition displays.
With a configuration to accommodate up to nine occupants, the Phenom 300 jet has a huge
76-cubic-foot (2.15-cubic-meter) baggage capacity that will conveniently transport
passengers’ luggage, golf bags and skis.
Two Pratt & Whitney Canada PW535E engines, with 3,200 pounds of thrust each, power this
jet. Its range with six occupants will be 1,800 nautical miles (3,334 km or 2,071 miles) with
NBAA IFR reserves, 35 minutes and 100 nm alternate. The aircraft is capable of flying at
45,000 feet (13,716 meters) at a maximum operating speed of Mach 0.78 and is also designed
for short-field takeoffs. These capabilities will permit customers to fly nonstop from London
(UK) to Reykjavik (Iceland), the Azores, Cairo (Egypt), Tel Aviv (Israel) or Moscow
(Russia); and from Geneva (Switzerland) to the same destinations, plus the Canary Islands, at
a lower cost than competitive aircraft.
Expected to enter service in the second half of 2009, the Phenom 300 is priced at US$ 6.65 million,
based on January 2005 economic conditions, in the baseline configuration, for FAA certification.
More information about Embraer Executive Jets is available at www.EmbraerExecutiveJets.com.