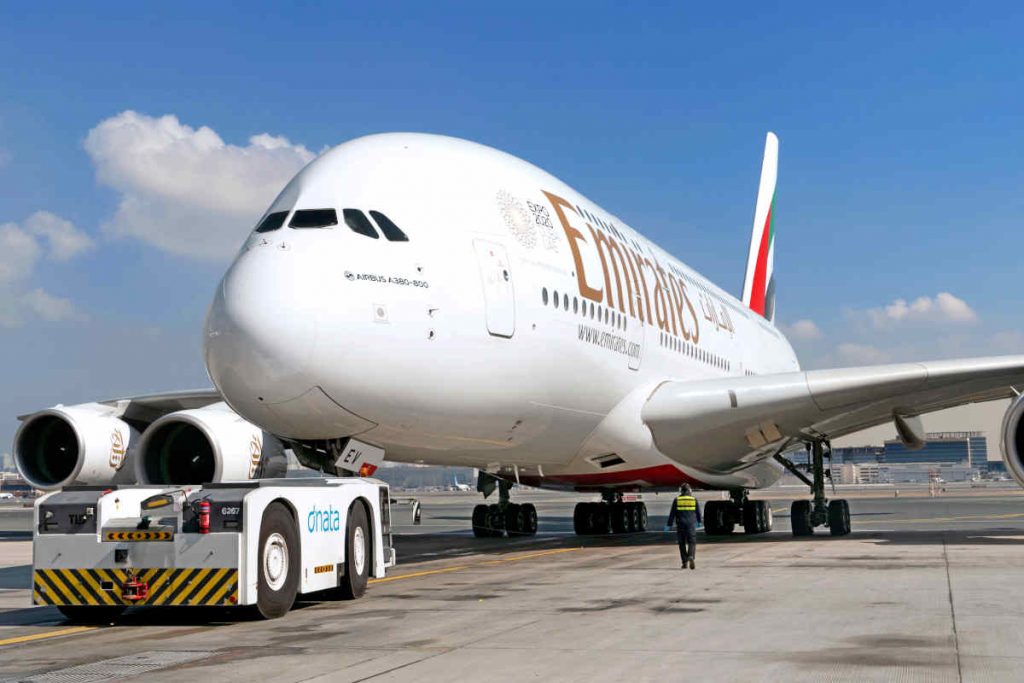 DUBAI, United Arab Emirates (AP) — The Middle East’s largest airline, Emirates, announced on Tuesday a net loss of $5.5 billion over the past year as revenue fell by more than 66% due to global travel restrictions sparked by the coronavirus pandemic.

It marks the first time in more than three decades that the Dubai-based airline’s parent group has not churned out a profit, underscoring just how dramatic an impact COVID-19 has had on the aviation industry. Emirates Group, which also operates dnata travel and ground services at airports, reported a total loss of $6 billion.

The Dubai-based airline said revenue had declined by $8.4 billion, even as operating costs decreased by 46%. The company has furloughed a third of its staff due to the effect of the pandemic on its bottom line.

Revenue as a whole for the company, including its dnata services, stood at $9.7 billion, compared to $28.3 billion the year before.

Emirates’ success is seen as integral to the health of Dubai’s economy, which relies heavily on travel, tourism, real estate and investment to thrive. In a clear indication of just how important Emirates Air is to Dubai, the state-owned carrier was thrown a $2 billion lifeline from the government to stave off a liquidity crunch in 2020. The move underscored how dire the situation had become for one of the world’s leading airlines amid the pandemic.

The International Air Transport Association has said it expects airlines to continue to suffer financial losses in 2021, despite vaccination rollouts in many developed countries around the world. The aviation industry’s largest trade association estimated that airline losses reached as wide as $126 billion in 2020.

“Sadly, our industry is not recovering as quickly as hoped,” said Emirates CEO and chairman, Sheikh Ahmed bin Saeed Al Maktoum. “Many countries are battling new variants and a third or fourth wave of COVID-19 infections, and international travel is still severely restricted in almost all markets.”

Emirates, which flies to more than 150 cities including several in the U.S., said its total passenger and cargo capacity declined by 58% over the year marking April 2020-March 2021. The long-haul carrier carried just 6.6 million passengers last year, a staggering decline of nearly 90% from the previous year.

The airline had squeezed out profits of $288 million the previous year, while its parent company Emirates Group had earnings of $456 million.

A brief statement by Dubai’s ruler Sheikh Mohammed bin Rashid Al Maktoum in the company’s annual report described the pandemic as “one of the biggest challenges humanity has faced.”

He noted his own country’s handling of the outbreak, which has varied widely from one emirate to the next and depended heavily on the decisions of its local rulers.

Dubai, for example, has flung open its doors to tourists since last year and does not require quarantine upon arrival. This in part, has kept it on the red list for travel for U.K. residents and those in the United States. Neighboring Abu Dhabi, however, has taken a far more cautious approach and even requires negative coronavirus test results or proof of vaccination for people driving from Dubai before entry.

For nearly eight weeks last year starting in March, Emirates was forced to ground all passenger flights amid a temporary closure of airports across the United Arab Emirates, including transit flights through Dubai – the hub for Emirates and the world’s busiest airport for international travel.

“We have been tested in our ability to deal with this unforeseen situation, but we have emerged out of it tougher,” Sheikh Mohammed said.

The carrier said that despite its financial losses, it remains committed to its order booking for 200 new aircraft as part of its “long-standing strategy of operating a modern and efficient fleet.”

The airline, known worldwide for its luxury first-class cabins, quality service and modern aircraft, received three new Airbus 380 aircraft over the past year and phased out 14 older aircraft. It now operates a fleet of 259 planes, including cargo.

To further distinguish itself amid last year’s travel upheavals, Emirates said it was the first airline to offer COVID-19 medical coverage for passengers who contract the virus while traveling.

In an effort to meet the surge in cargo demands last year in the UAE, which relies heavily on food and other essential imports, Emirates said it turned 19 Boeing 777 passenger aircraft into “mini freighters” by tearing out the seats in the economy cabin to make room for more cargo.

Emirates has proven very profitable to its shareholders. During the 2015-2016 fiscal year, it netted profits of $1.9 billion – a record it has not repeated since then.