Carroll McCormick presents the second of a two-part examination of RAIC. 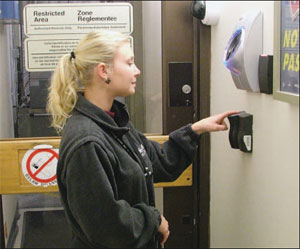 In
the first of our two-part series on the Restricted Area Identification
Card (May/ June 2007, page 36), we reported on the deployment of the
RAIC dual biometric identification card system to Canada’s 29 largest
airports, with a January 31 implementation deadline. It replaced the
Restricted Access Pass as a way of identifying roughly 100,000
non-passenger personnel and positively matching them to their
identification cards before granting them entry to restricted areas in
the airport terminals and apron.

The combination of realtime
validation of every cardholder’s photo ID and iris or fingerprint at
the doors to restricted areas, processed almost instantly through the
airport’s access control system, improves security yet speeds the
processing and passage of authorized personnel. Each airport configures
its access control system to grant access only to those employees who
have what it deems legitimate business in a particular restricted area
or areas at specified hours of specified days.

Since RAIC is a
national card – Transport Canada conducts the background security
checks and the Canadian Air Transport Security Authority (CATSA)
updates the approved cardholder list – any cardholder could, in theory,
be approved to enter restricted areas in any of the 29 airports. But
access control is handled locally and all of the airports we contacted
require that non-local personnel enter restricted areas via passenger
screening checkpoints or designated bypass points.

This
cautiousness is rather irritating to commercial pilots, who visit many
airports. “The full intent of this card at one time was if I got a card
issued here at the Greater Toronto Airports Authority, I should have
full access to the secure side at Vancouver. [RAIC] is not up to its
full potential yet, because they are issued for the airport you are
based in. You are treated differently at different airports.

There
are some bypass lines you are allowed to go to at your base airport
that you can’t go through at other airports,” explains Brian Boucher,
senior director of flight safety with the Air Canada Pilots
Association. There are pilot bypass points at the larger airports like
Montreal, Toronto, Calgary and Vancouver, but at other airports pilots
must use the passenger security checkpoints. “Eventually we would like
to go to any secure door that lets us in,” Boucher says. This cautious
approach is, he notes, “more of a local issue than a CATSA issue.”

Pilots
like the quick turnaround that RAIC offers; i.e., shorter lineups
because of the speeded-up card verification. “Pilots are going in and
out of security all the time to get flight plans and even to get
something to eat. To be able to move around freely and securely [is
great],” Boucher says. However, pilots want the as-advertised access to
more doors to restricted areas, citing the not always minor
inconvenience of having to go to crew entry points.

A recent bug
has surfaced with pilot bypass points at Toronto and Calgary. Boucher
said that as of May some pilot cards were not being recognised at some
access points, something CATSA has been working to rectify.

A
mobile enhancement to RAIC has made it possible for pilots to use their
RAIC cards at the passenger security checkpoints, and has improved
airport security overall. CATSA issued airports portable
biometrics/card readers earlier this year – 350 of them so far,
according to Quebec-based Labcal Technologies Inc., manufacturer of the
Labcal Be.U Mobile handheld readers. Ontario-based Bioscrypt Inc.
supplied the fingerprint verification algorithm for the readers and
Ahearn & Soper Inc., headquartered in Ontario, won the contract for
the continuity of deployment of the readers.

Pilots have their
RAIC cards read with the readers, but they are also being used
elsewhere. The Charlottetown airport, for example, received its
portable units in February and not only uses them to verify RAIC cards
and cardholders before they enter restricted areas, but also for spot
checks inside the restricted areas.

“They allow security people
to immediately validate someone in a restricted area,” says Eugene
McDonald, the airport’s director of planning and programs. In a smaller
airport it is more of a challenge, because everyone is known, to
motivate people to keep validating the passes each time they enter a
restricted area.

“The portable units let us go in and check if
you have validated your pass. Every time you validate your pass, a
record is taken [which door, when, who]. If you are caught in a
restricted area without having validated your card, I’ll be asking you
why you didn’t do it. The first time you’ll get a warning, the second
time there will be a different result.”

After 9/11, amended
security regulations required airports to have full-time security
personnel at entries to restricted areas. In order to mitigate this
added expense, some airports reduced the number of access points. One
airport, for example, was reported to have reduced its access points
from several dozen to around 12. Doors must be attended in order to
prevent tailgating, or piggybacking, which happens when an unverified
second person slips through an access door behind someone who has
obtained access with an ID card.

Three airports – Kelowna,
Winnipeg and London – have installed an access control system called a
“mantrap,” so named by Washington-based Newton Security Inc., the
manufacturer of the operative mantrap technology called T-DAR; Canadian
airports variously refer to it as a mantrap, persontrap or, in
Winnipeg, antitailgating access portal. Vancouver expects to install
mantraps this year, Victoria has put its mantraps plans on hold and as
many as two dozen airports and security integrators have contacted
Newton Security to discuss them.

A mantrap consists of a space
between an entrance and exit door, which is monitored from above by
T-DAR, which can tell if there is more than one person inside. A user
enters the mantrap and the first door closes behind him. Then he has
his RAIC card and iris or fingerprint read. Once his ID is verified and
T-DAR determines that there is just one person in the mantrap, the exit
door unlocks to provide access to the restricted area; the two doors
cannot be opened simultaneously.

Kelowna was the first to
install mantraps (it now calls them persontraps) in a Canadian airport
and currently has four: three in the WestJet, Air Canada and Horizon
lease areas and one in a commonuse area. “We got an exemption from
Transport Canada to use the persontraps and remove the security guards
at those portals,” says Neil Drachenberg, Kelowna’s airport fire and
security chief.

London currently has one mantrap, which is
operational 24/7 and fully automated. “Employees love them. If you have
an operational requirement to get to an aircraft, you can predict how
long it will take to get through the man trap. It is a 20/30- second
process to go through,” says Steve Baker, president and CEO of the
airport.

CATSA has begun the second phase of RAIC, which extends
its application beyond the terminal and apron. It is scheduled to be
completed by March 2008. Planning teams are in place and information is
being assembled at each airport on how to apply RAIC II.

Kelowna
is already doing what other airports may adopt as part of RAIC II: It
has configured the vehicle access to the airside so all vehicles have
to pass through one RAIC-controlled gate. “We have expanded the system
to do things that were not under the original concept of RAIC,” says
Drachenberg. “For example, we use RAIC to control who opens the door
for our oversized baggage drop. We use RAIC and access control system
to determine who can go from the restricted to the sterile area.”