News
Etihad places order for up to 205 aircraft

Etihad places order for up to 205 aircraft

Etihad Airways has placed one of the largest aircraft orders in commercial aviation history at the Farnborough International Airshow in the UK. 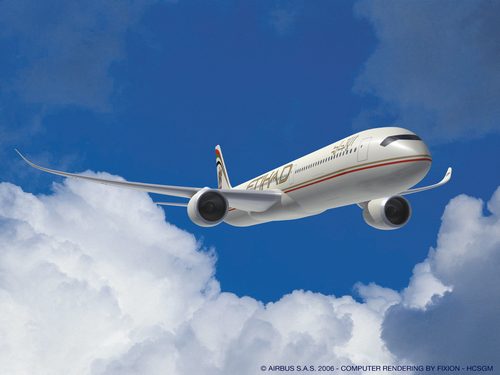 July 14, 2008, Farnborough, U.K. – Etihad Airways has placed today one of the largest aircraft orders in commercial aviation history at the Farnborough International Airshow in the U.K.

The total deal for up to 205 wide-body and narrow-body planes is worth approximately US $43 billion, at list prices. It comprises 100 firm orders, 55 options and 50 purchase rights in a combination of Boeing and Airbus aircraft.

The new aircraft are scheduled for delivery between 2011 and 2020 for Abu Dhabi-based Etihad Airways and when delivered will give the national airline of the United Arab Emirates a fleet of more than 150 aircraft.

James Hogan said: “This is a momentous day for Etihad Airways and Abu Dhabi and represents one of the largest aircraft orders in commercial aviation history. It reflects the strength and pace of economic growth in the Emirate and the integral role Etihad will play in Abu Dhabi’s future.

“That future will see planned investments in infrastructure and projects within the Emirate likely to exceed US $200 billion during the next 10 years, an aggressive tourism push and enormous residential development. We are extremely proud to play a leading role in realising these exciting plans in the years ahead.

“The size of our order also mirrors the rising prominence of the Middle East and its increasing emergence as a new focal point of global aviation and a natural air bridge between East and West offering the fastest air links for travellers and freight forwarders.”

A key selection criterion in the deal has been the environmental performance of the aircraft. Mr Hogan added: “The new generation aircraft we have ordered from both Boeing and Airbus are amongst the most fuel efficient and will help maintain Etihad’s fleet as one of the youngest and greenest in the sky.”

Etihad Airways’ chairman His Highness Dr Sheikh Ahmed bin Saif Al Nahyan said: “The story of Etihad’s growth has been a remarkable one. At every stage of our short history we have surprised people with the scale of our ambition – and at every stage we have delivered on that ambition.

“This aircraft order is another major step forward in our journey and will enable us to continue our exciting expansion plans by adding new destinations to our growing global network and fulfil our aspirations of bringing Abu Dhabi to the world.”

Since its establishment in 2003, Etihad Airways has been recognised as the fastest growing airline in commercial aviation history. It serves 45 global destinations covering Africa, Asia, Australia, Europe, the Middle East and North America and this year is on course to carry six million passengers.

So far this year, the airline has started new flights to Beijing in China. August will see Chennai (Madras) and Kozhikode (Calicut) in India, and Minsk in Belarus added to the network.

Etihad will also launch new services in December to Moscow in Russia and Almaty in Kazakhstan.