Hallbergmoos, Germany - Active on Baltic Patrols in support of NATO, and fresh from Exercise Red Flag in Nevada, the Eurofighter Typhoon Team have confirmed that a new suite of capabilities is delivering ‘spectacular results’ in 2015 as the 431 aircraft delivered to customers come close to accumulating 300,000 flying hours. 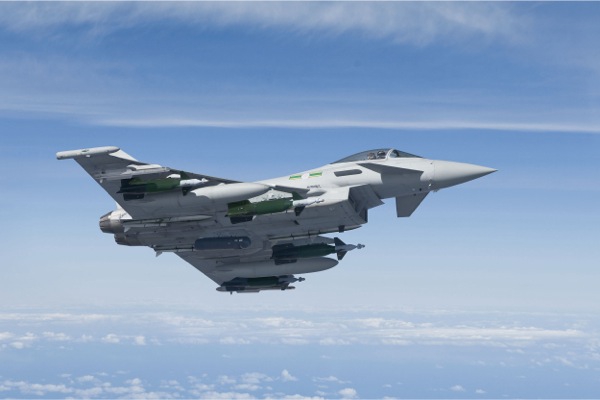 Eurofighter CEO, Alberto Gutierrez, said: “We are getting extremely positive feedback from our customers over the performance and reliability of the Eurofighter Typhoon, both on exercise and on deployment. It is now becoming widely recognised that the platform is a potent force multiplier, especially when flying in support of other airborne assets.”

Already recognised as the ‘backbone of European air power’, the Typhoon’s credibility has recently been further enhanced with the continued integration of powerful new radar and weapons capability.

Eurofighter will be represented at this month’s CANSEC in Ottawa, Canada’s premier trade defence show, through its partner company Airbus Defence and Space, one of three major aerospace companies that members of the Eurofighter family gain access to as part of the Eurofighter Typhoon community.

Seven nations have currently ordered or are already flying the European fighter-jet, which was conceived around air superiority but which now offers instantaneous swing-role capability between air to air and air to ground.

“At the recent Red Flag exercise in Nevada,” said Alberto Gutierrez, “the UK RAF demonstrated the Eurofighter’s swing-role capability with spectacular results. Since the last CANSEC in 2014 our capability enhancements have just kept coming and the capability roadmap is set to continue growing the capability of the aircraft for years to come.”

In November last year a 1 billion Euro contract was signed to ensure the Eurofighter Typhoon can be equipped with an AESA E-Scan radar system which will be unmatched anywhere in the world. In the same year, significant progress was made to integrate Meteor and Storm Shadow long-range missiles onto the platform which, when married to the Eurofighter’s kinematic performance will deliver massive potency to an already formidable aircraft.

The integration of Brimstone 2 precision-guided air-to-surface missile is also moving apace and it will be introduced at the same time as software upgrades that enhance the performance of Paveway IV and ASRAAM weapons. The combination of these upgrades, married to the existing and developing capabilities of systems such as the Striker I and Striker II helmet-mounted display systems, all make the Eurofighter Typhoon the most potent all-rounder in the sky.

The key messages that the Eurofighter Team in Canada will be delivering to CANSEC centre on the fact that the aircraft can fulfil all the nation’s foreseen operational scenarios, economically benefit the Country, and guarantee air dominance for the 21st century. The Team will also be highlighting that the aircraft is fully interoperable with US aircraft and other NATO countries.


Related
Airbus Group to showcase security and defence products at CANSEC
CMC electronics to display Cockpit 4000 at CANSEC 2015
Rockwell Collins to show its commitment to Canada’s military at CANSEC 2015
Making a splash!: NBAA2015