Features Military
Every day the Harvards fly is Remembrance Day 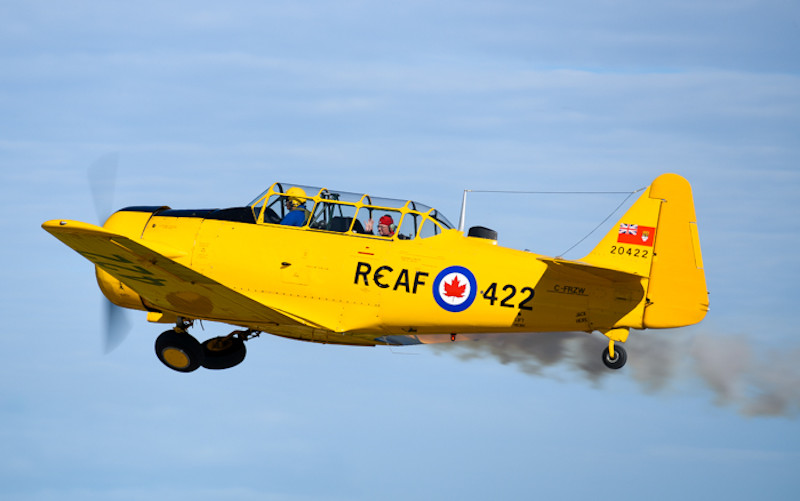 The Canadian Harvard Aircraft Association based at Tillsonburg Regional Airport in Ontario holds one of its monthly Fly Days on September 26, 2021, allowing the general public to book rides and support the group. (Photo: Gustavo Corujo)

Fifteen hours of maintenance for one hour of flight. More than 10,000 parts. And 50 days worth of repairs.

While the numbers don’t tell the whole story about this labour of love, they do give a glimpse into the local effort to restore a long-grounded Second World War Harvard training plane and return it to the skies.

“For the people who stayed at home during the war, and in the ’50s, here in Canada, this is the war they saw. They saw Harvards flying.”

Powered by dedicated volunteers, the association in Tillsonburg, southeast of London, has kept these planes of Canadian history alive since 1985.

The Harvard was the advanced single-engine aircraft used to train more than 130,000 aircrew under the British Commonwealth air training plan — a joint military training program with allied nations — in Canada during the Second World War.

The training program “was Canada’s largest single contribution to the Second World War because it was not only Canadian pilots, but British pilots, American pilots, guys from New Zealand, Australia, Indonesia, Jamaica, India ? they all come here.”

First flown in 1938, the Harvard was used as a trainer from 1939 to 1965. The association is home to eight of these vintage planes — the largest fleet of Harvards in North America. Three of them entered service in 1941, while the other five were in service in 1952.

Notorious for its distinctive engine roar and heavy tail wheel, the Harvard was not an easy plane to fly, mainly because of its challenging landing, Clayton said.

“They were very hard aircraft to operate,” he said. “But once you mastered it, you could basically fly anything.”

He estimates more than 1,000 pilots died from Harvard training accidents, whether it was due to weather or mechanical problems.

With a wing span of nearly 13 metres, the aircraft measures nearly nine metres in length and more than three metres in height. The cockpit is made of tubular steel, while the tail cone and wings are aluminum monocoque construction. The control surfaces are fabric-covered.

“They are basically built like a brick outhouse,” Clayton said. “They’re made to take the damage from pilots beating (them up).”

Underneath its bright yellow coat is a 600-horsepower Pratt and Whitney Wasp engine, known as the Wasp. It’s the same engine that powered other planes of some iconic pilots, including Amelia Earhart’s Lockheed 10.

Today, fewer than 100 Harvard planes remain in Canada, many of them in museums. An estimated 40 to 50 of those trainers could be made suitable to fly, Clayton said.

Southwestern Ontario was home to more than 20 flying schools during the Second World War, he said. In Tillsonburg, the legacy of the historic planes continues, thanks to about 15 certified pilots and nearly 50 volunteers.

Among the various branches are the restoration and maintenance teams that take on the task of repairing and preparing the 10,000-part aircraft for flight. There are 107 bolts in one wing alone.

The bulk of maintenance, including annual inspections and overhauls, happens in the winter when the planes are stored in hangars.

The cost to fly a Harvard is about $600 each hour, Clayton said. The costs to restore, preserve, display and fly the plane are covered by donations from members and visitors. A large portion of the non-profit’s funding also stems from aircraft rides offered to the public between April and Remembrance Day.

To mark the day this year, three of the association’s Harvards will fly over the cenotaph at Old City Hall in Toronto next week.

But every day, the Harvard honours Canadian veterans who served in the First and Second World Wars.

“The thing with us is, basically every time you fly, it’s Remembrance Day,” Clayton said.

While it may be a hefty price and long hours to keep the plane in shape, to him, you cannot put a price on a legacy meant to be shared with others.

“Sometimes during the winter, you’re here, and you’re saying, ‘Why the hell am I doing this? It doesn’t seem to be making much visual progress,”’ Clayton said.

“But then, when you roll them out in the spring ? and see them in an air show, in front of tens of thousands of people, everybody stops what they are doing and watches. You think, ‘I helped put them there.’ That’s the fun part.”