The recovery in Canadian maintenance repair and overhaul (MRO) reported last year in Wings continues to take hold despite the Aveos set back. 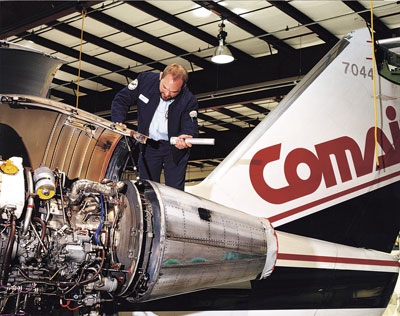 Smaller MROs in Canada that operate in the shadow of the larger players when it comes to attracting specialized skills have not created their own pipeline through a national database.

The recovery in Canadian maintenance repair and overhaul (MRO) reported last year in Wings continues to take hold despite the Aveos set back. The sudden collapse of Montreal-based Aveos Fleet Performance last April sent shock waves across the MRO industry and raised questions over Canada’s competitiveness in global MRO. It has also left Canada without a single, full-service operation as aircraft fleets continue to grow and operators outsource more engine and component work.

“Quebec’s aerospace industry feeds off each other,” said Robert Donald, executive director of the Canadian Council for Aviation and Aerospace (CCAA). “Having local suppliers is important, and having a world class, full service MRO was a boon to the entire industry. It is now one less piece in the cluster.”

The Aveos bankruptcy tossed 2,800 largely skilled employees out of work including 1,800 in Montreal. It is estimated that approximately 40 per cent have found new employment, although not all in MRO or even aerospace. Many have found jobs at neighbouring Bombardier to work on the CSeries jetliner, Rolls Royce Canada and Innotech Aviation. Others have departed the sector for careers with CN and Hydro Quebec.

Innotech has hired approximately 40 ex-Aveos employees and is looking for a few more specialized skills for avionics and design engineering.

It is a familiar story in Canadian MRO where Original Equipment Manufacturers (OEM) like Bombardier and Pratt & Whitney Canada, and large MROs such as StandardAero and Viking have a ‘pipeline’ to available skills, while smaller shops cope with a continued skills shortage.

“We have been very lucky,” confirms Rob Mauracher, vice president of business development and general manager of MRO for Sidney, B.C.-based Viking Air. Viking’s MRO division specializes in full service work for de Havilland Beaver, Turbo Beaver, Otter and Twin Otter aircraft. “The kind of work we do has put us at the forefront of the demand for specialized skills.”

Aveos was also connected to the pipeline. So why have approximately 60 per cent of its employees not found work? “The surplus will get picked up as we move forward,” insists Donald. “Even now we are getting phone calls from MROs across the country asking how to get in touch with these people. For some it will mean relocating out of Montreal or Vancouver. There are a lot of issues.”

Indeed, some of the ex-Aveos employees may be sitting it out waiting to see how the Aveos cleanup unfolds. On that front, there appears to have been some movement. British-based AJ Walter Aviation has signed a letter of intent to purchase Aveos component repair business, which could send 300 employees back to work this fall. AJ Walter Aviation has facilities in London, Dubai, Singapore and Miami and is expected to establish Montreal as the company’s global aircraft components maintenance headquarters.

Interestingly, smaller MROs who operate in the shadow of the larger players when it comes to attracting specialized skills have not created their own pipeline through a national database. “No database that would connect employers with the skilled labour they need exists,” said Donald. “It is something that we need to look at.”

The Aveos collapse presented a logistical challenge to Air Canada, who had sold Air Canada Technical Services to a consortium that eventually evolved into Aveos, and was the airline’s main maintenance supplier. “We supported Aveos through many different forms, but primarily through a very generous long-term contract. But they were unable to attract sufficient third party business,” said Calin Rovinescu, Air Canada’s chief executive officer.

The swiftness of the bankruptcy sent Air Canada scrambling to find maintenance spots in Canada and around the world, including Premier Aviation Overhaul Centre based at Trois Riviéres Airport in Quebec. Premier, which also has a location in Rome, N.Y, recently opened an MRO in Windsor, Ont. Other Air Canada work is handled by Lufthansa Technic in Germany and companies in the U.S., Israel, Hong Kong, Japan and France. “Basically we had aircraft and engines all over the place,” added Rovinescu.

Air Canada is consolidating its MRO business and is working with the chief restructuring officer of Aveos and court appointed representatives to determine where many of the contracts will go.

Can Canada remain competitive in global MRO? It depends on what the customer is looking for. Price sensitive basic maintenance will continue to shift to lower wage countries and MROs in emerging markets in Asia, South America and the Middle East will put added pressure on the North American industry. “It is a global industry and you can go anywhere,” Donald said. “The work we are doing now is more sophisticated and is being fuelled by Canada’s strong presence in manufacturing.”