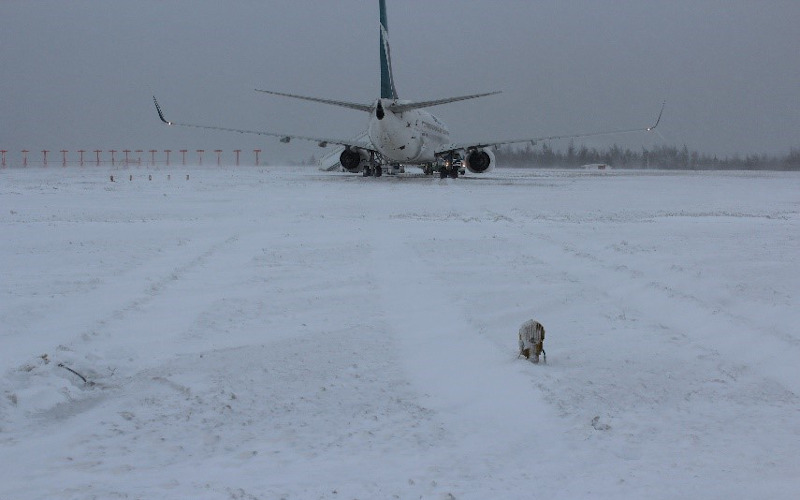 WestJet Flight 248 skidded off the end of a runway during a snowstorm at Halifax Stanfield. (Source: TSB)

HALIFAX — The Transportation Safety Board says a passenger jet overshot the runway at the Halifax airport last year after its crew failed to recalculate wind and approach speed before switching runways.

None of the 172 passengers or six crew were hurt and there was no damage to WestJet Flight 248 after it skidded off the end of a runway during a snowstorm at Halifax Stanfield International Airport on Jan. 5, 2020.

In a news release issued today, the safety board says the crew of the Boeing 737-8CT aircraft that was arriving from Toronto requested the runway change because weather conditions had reduced visibility.

Investigators say the crew assumed the landing distance and target approach speed would be the same as the original runway, but the speed and direction of the wind changed as the aircraft approached.

They say that resulted in a tailwind that increased the aircraft’s speed — a factor that went unnoticed by the crew — and resulted in the plane touching down at a faster groundspeed on a runway covered with wet snow, which reduced braking effectiveness.

At the time it occurred, the runway overrun was the third such incident at the airport in two years.

The safety board said the WestJet flight came to rest in snow with the nose wheel about 91 metres beyond the end of the runway.

“It is important that the aircraft have an adequate safety area beyond the end of the runway to reduce adverse consequences,” investigators said. “In this occurrence, the aircraft stopped within the 150-metre runway-end safety area, which meets current international standards.”

The safety board said WestJet has since highlighted to its pilots the importance of factoring in the actual runway intended for landing when making pre-landing calculations.