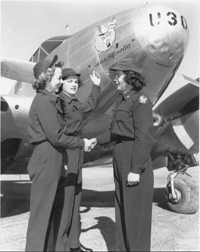 "WASP – A Passionate Pursuit," a new exhibit at the Fantasy of Flight attraction in Polk City, Fla., creates a compelling multi-media salute to fearless women who reached beyond themselves, defied convention and served heroically.

"WASP – A Passionate
Pursuit," a new exhibit at the Fantasy of Flight attraction in Polk
City, Fla., creates a compelling multi-media salute to fearless women
who reached beyond themselves, defied convention and served heroically.

The multi-media celebration premiered on Dec. 9, 2008. “WASP – A Passionate Pursuit” tells the story of the gutsy, barrier-busting female pilots of the Second World War.

Once again the "greatest generation" stepped forward to meet the challenge – only this time the boots were filled by women.

"WASP – A Passionate Pursuit" is included in Fantasy of Flight's admission. Featuring displays and video from the 1940s and today, the exhibit depicts the spirit of daring, adventure, and inner strength that allowed these women to reach beyond themselves. Accepting the challenge to serve their country in a brand new role, they discovered skills and power they never knew they possessed and set a powerful example for generations that followed.

"The creation of the Women Airforce Service Pilots organization was a major milestone in aviation history," says Kermit Weeks, Fantasy of Flight creator and owner.

"Our new exhibit, 'A
Passionate Pursuit,' falls directly in line with Fantasy of Flight's
mission to encourage self discovery using the powerful metaphor of
aviation.  WASP pilots reached far beyond the expectations of others
and broke barriers every time they roared through the sky in a Mustang
or a B-29. They lived their dream, and we are proud to pay tribute to
the accomplishments of these smart, adventurous women."

Guests can explore the
exhibit in four separate bays that feature historical, anecdotal, and
inspirational video footage, photos, and storytelling panels.  Many
original photos of WASP recruits in training provide vivid
documentation.  Newsreel coverage of the women jumping into planes and
flying high takes guests back in time to this exciting era.

Becoming a member of the WASP was a leap for women who grew up during the Great Depression, a time when women simply weren't expected to do certain things. But many patriotic women already had taken over factory jobs vacated by U.S. servicemen.  And before long, thousands of other women between the ages of 21 and 35 who yearned to help their country signed up for WASP training. Flight training began on dusty Avenger Field in Sweetwater, Texas.  At an intense pace, the women were put through a rigorous, strength-building calisthenics program and schooled in physics, meteorology, navigation and every other flight topic.

In 1943, a Life magazine article exposed the WASP to America for the
first time. The result: thousands of women flooded the Pentagon with
training applications. In the end, only 1,830 of the 25,000 applicants
were accepted into the program, and 1,074 of those women earned their
silver WASP wings. Soon, they were delivering and testing fighters and
bombers.  Their indomitable founder, Jackie Cochran, became the first
civilian to receive the U.S. Army Distinguished Service Medal for her
vision and leadership of the WASP program.

The exhibit's historic newsreel features film clips of the women in their jumpsuits as they train, fly, and even take a rare swimming break. The clips add sometimes humorous insight into a time when equality for women was a whisper just beginning to resonate across the cultural landscape.  The newsreel narrator describes WASP training as a "tough ordeal," yet often refers to the pilots as "girls" and quips that each pilot is the "softer fairer sex" who is sometimes "worried to death she's going to get her hair wet."

Margaret Ray Ringenberg, a featured WASP, provides a more candid take on why she pursued the opportunity:  "I could be a nurse. I could wait tables in a restaurant. I could get married . . . none of these things appealed to me, because I was fascinated by airplanes."  None of the women feared flying; in fact, they found it exhilarating.  Their euphoria and sense of purpose in the cockpit tell an inspiring story to those who visit "WASP – A Passionate Pursuit."

Other recent additions to Fantasy of Flight attractions include the Fun with Flight Center for families and The Tuskegee Airmen – They Dared to Fly exhibit.For more information about Fantasy of Flight, call 1-863-9843500 or visit
www.fantasyofflight.com .


Related
“Cooking for the Cure – Fantasy of Flight for the Fight”
Female pilots very much in minority: British report
Canada’s first female pilot to be honoured during Woman of Aviation Week
All female crew lands at YVR to highlight women of aviation week