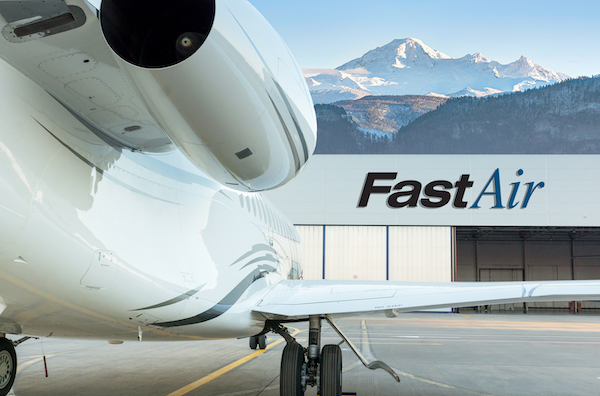 Based on the current response to available fractional shares, Fast Air expects to being construction on its Abbotsford International in 2021. (Image: Fast Air)

Headquartered in Winnipeg, Fast Air explains the new facility will be developed to accommodate a fractional ownership business model. The company is planning for a facility of approximately 30,000 square feet to accommodate the newest large-cabin business jets, while also providing a VIP environment for business-aviation travellers.

The facility will be developed under a campus-style approach with distinct facilities for fractional owners, such as an executive lobby, board room, private office space and private ramp space for aircraft. Fast Air notes design attention will be given to creating a minimal environmental impact, while also building Canada’s first business aviation complex designed to accommodate both traditional and electrified business aircraft.

“Abbotsford International Airport offers low traffic congestion in the air and on the ground and lower operation costs,” said Dan Rutherford, manager of business development, Fast Air. “This is an exciting project for us as and we believe there is tremendous potential at CYXX for business aviation and executive air charter services.”

Construction on the facility is scheduled to begin in 2021, based on the response to the available fractional shares. Fast Air notes it has already received considerable interest from flight departments exploring new options.

“This project will provide an exciting new link to Canada’s $12.1 billion business aviation sector and we anticipate accelerated growth as a result,” said Henry Braun, Mayor of Abbotsford, which owns and operates the Abbotsford International Airport. “This project reflects the tremendous confidence Fast Air has in our community and the growing regional economy. The project will attract development to our city that builds value, creates jobs, and continues to drive economic growth.”