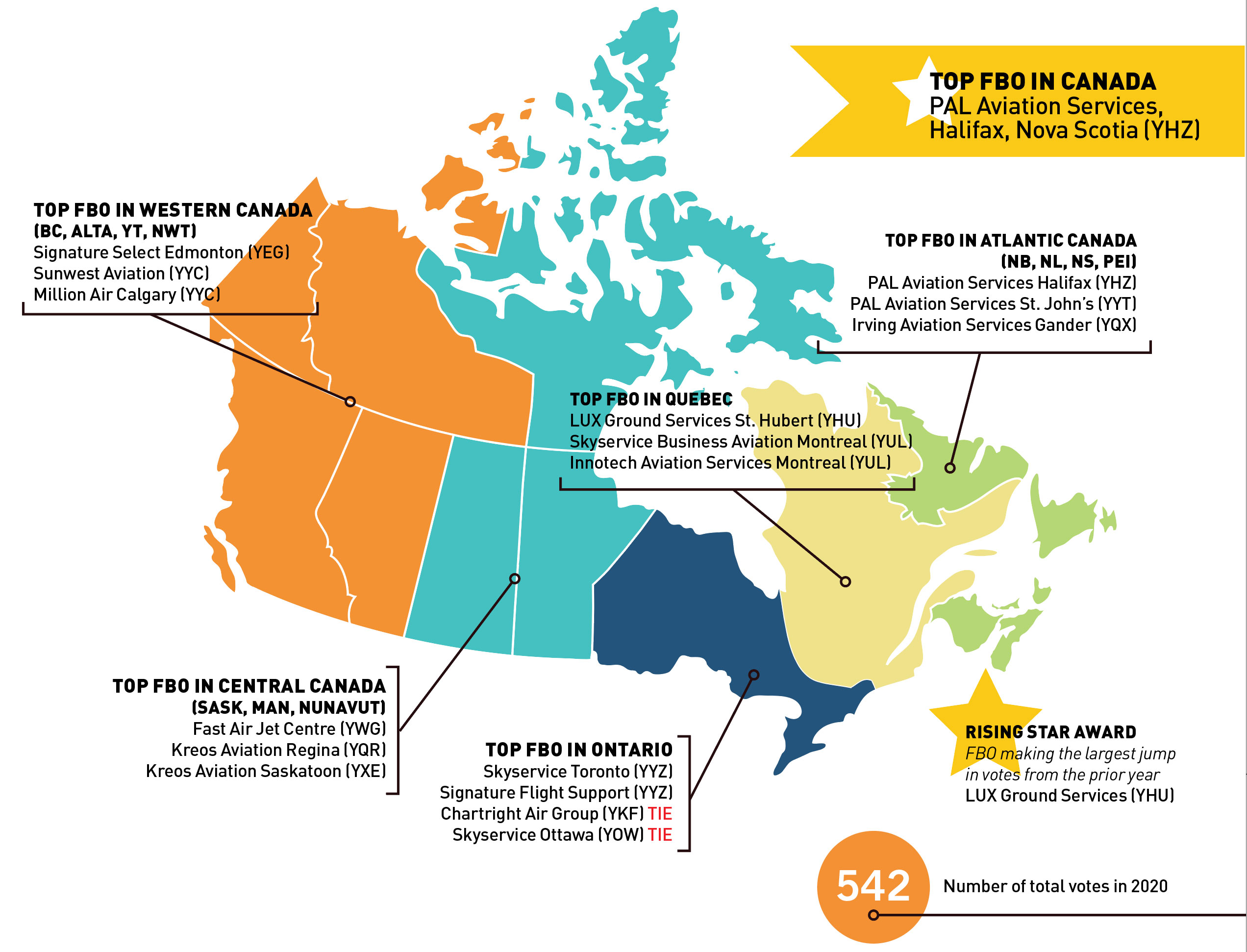 The 2020 Fixed Based Operator survey conducted by WINGS received 542 responses in an open voting system through the months of April, May and June. Down significantly from last year’s record 1,845 participants, the number of respondents in 2020 still provides material results to help determine the Top FBO in Canada in 2020, best operations by region and the country’s Rising Star.

The timing of this year’s FBO Survey, taking place during what is likely to be recorded as the height of the COVID-19 pandemic, also provides unique insight into the private and corporate aviation sector from the mindset of its customers. In addition to listing what they consider to be the best FBO in Canada, respondents were asked to rank eight factors in terms of what is most important to them in determining their favourite FBO, from service and pricing to the various aspects of the venue.

The 2020 survey asked respondents to share their primary reason for flying – business, personal or government/professional services – and where they are flying to – domestic, transborder or international. Respondents were also asked if the COVID-19 pandemic would encourage them to fly more often via private or corporate aviation through FBOs.

PAL Aviation Services’ FBO in Halifax, Nova Scotia (YHZ), this year received the most votes across all five Canadian regions to be named as Canada’s Top FBO in 2020, which marks the company’s second consecutive such honour with PAL Aviation St. John’s winning in 2019. LUX Ground Services of St. Hubert, Quebec, was the runaway winner of the Canada-wide survey’s annual Rising Star Award, which last year went to Sunwest Aviation of Calgary, Alberta.

The survey recognizes the excellence of the Top Three FBOs across five regions. Moving from West to East, Signature Select Edmonton (YEG) was named the Top FBO in the Western Region, followed by the Calgary-based operations of Sunwest and Million Air. In Central Canada, Fast Air Jet Centre of Winnipeg came in first, followed by Kreos Aviation in Regina and Saskatoon.

Skyservice Toronto (its original FBO location at Pearson International) was named as the Top FBO in Ontario, followed by Signature Flight Support Toronto in second place and a tie for third between Chartright Air Group at Waterloo International and Skyservice Ottawa.

In addition to its Rising Start Award, LUX was recognized as the Top FBO in Quebec, followed by Montreal’s Skyservice and Innotech Aviation Services. PAL Aviation Halifax’ top finish was followed by PAL Aviation St. John’s in second and Irving Aviation Gander in third.

Basing conclusions on when survey responses were submitted, April and the first couple of weeks in May were easily the slowest period of the three-month survey, which, of course, can be attributed to cycles of COVID-19 infections and containment; followed by the opening of economies in varying phases in June. Even as travel restrictions were still in place for non-domestic flights, the higher numbers in June can also be attributed to FBOs firming up greater safety measures in both their terminals and aircraft.

Respondents were asked was best describes their primary use of an FBO with business aviation representing vast majority of responses at 64 per cent, followed by personal at 23 per cent, and government/professional services at 10 per cent. The category of “other” at three per cent most often related to fuel stops or someone using an FBO for more than one primary purpose as noted above. Interestingly, the category of government/professional services saw the biggest jump in June to just under 15 per cent.

When asked if the COVID-19 pandemic would result in more travel via private or corporate aviation, 61 per cent of the respondents indicated “yes”. Respondents were also asked where they most often travelled to, either domestic, transborder (United States) or international. Over the three-month period from April to June 2020, domestic travel dominated the private/corporate aviation sector at 67 per cent. Transborder travel into the United States came in second at 24 per cent and international destinations only accounted for eight per cent. These percentages remained relatively consistent for each month, although transborder travel seemed to pick up in the month of June at the expense of international travel, which may be explained by the previously mentioned increase in government/professional services travel over that same month.

Survey participants were asked to rate what FBO services are most important to them on a scale of 1 to 10, with 10 being extremely important. Understanding the results will be skewed based on whether the FBO client is a pilot or passenger, the survey focused on eight customer-satisfaction indicators, ranked here from most to least important, along with their average score: Customer service (9.1), line service/fuel (8.7), terminal facility (8.5), price (7.9), pilot amenities (7.9), hangar (7.6), part of FBO network (6.9), and proximity to office/home (6.5).