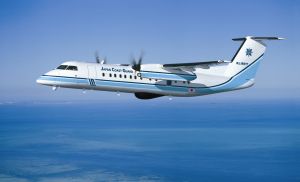 This brings to 33 the number of Bombardier aircraft Field Aviation will have modified for use as patrol and surveillance platforms for six national governments worldwide: USA, Australia, Japan, Sweden, Iceland and Denmark.

The maritime surveillance modifications include unique, Field Aviation designed features such as an air-operable rear cargo door and a fuselage drop hatch, both facilitating airborne dispersal of life rafts, survival supplies and paratroops. As well, the aircraft will have a missionized, crew-station interior, large, conformal observation windows and fuselage structural mods.

Latest technology surveillance sensors include a 360˚ surface search radar, a stabilized electro-optical multi-spectral imaging payload, as well as a new suite of modern mission navigation and communications systems. The final three aircraft in the contract are slated for completion and final delivery from Field by January of 2011.