When Emirates Airline flight EK241 touched down in Toronto on Oct. 29, 2007, it officially opened the first and only non-stop connection between Canada and Dubai. 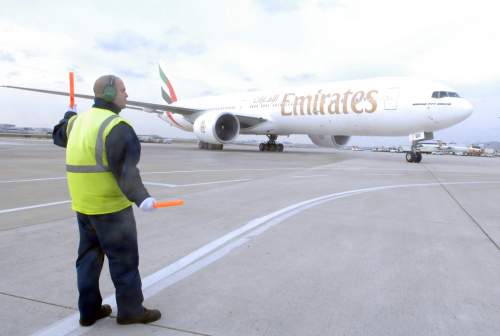 When Emirates Airline flight EK241 touched down in Toronto on Oct. 29, 2007, it officially opened the first and only non-stop connection between Canada and Dubai.

The inaugural flight for Emirates' new three-times-weekly service between Toronto and Dubai was greeted by fanfare at Toronto’s Pearson International Airport.  The Boeing 777-300ER, with Canadian captain Warren Montgomery from Hudson Bay, Saskatchewan, at the helm, was welcomed by a water-cannon ceremony on the runway.  That was followed by a special cake-cutting ceremony at the airport, presided over by His Highness Sheikh Ahmed biSaeed Al-Maktoum, Chairman and Chief Executive, Emirates Airline and Group, who was among the passengers on the first flight.

“We are very excited about opening the first non-stop direct gateway between Canada and Dubai,” said Sheikh Ahmed.  “As Canada’s financial centre with world-class restaurants, cultural venues, professional sports, trade exhibitions and hundreds of festivals each year, Toronto will be very attractive to both business and leisure travellers from across our route network.  Conversely, we anticipate Canadians to take advantage of this new direct gateway into Dubai, the Middle East and across our growing global network.”

Toronto is Emirates 97th destination on its network, now, including Canada, spanning 61 countries.

The inaugural return flight – EK242 – departed Toronto for Dubai at 21:40 on 29th October.  Regular service between Toronto for Dubai will be every Monday, Wednesday and Friday. Service takes just over 13 hours from Toronto and about 14 hours, 20 minutes on the return journey.

Emirates is flying its state-of-the art Boeing 777-300ER on the Toronto-Dubai route, offering 12 First Class, 42 Business Class and 304 Economy Class seats: a total of 358 in a three-class configuration.  The aircraft also features the airline’s award-winning entertainment and communications system, ice (information, communication, entertainment), on which passengers can enjoy over 600 channels of entertainment.