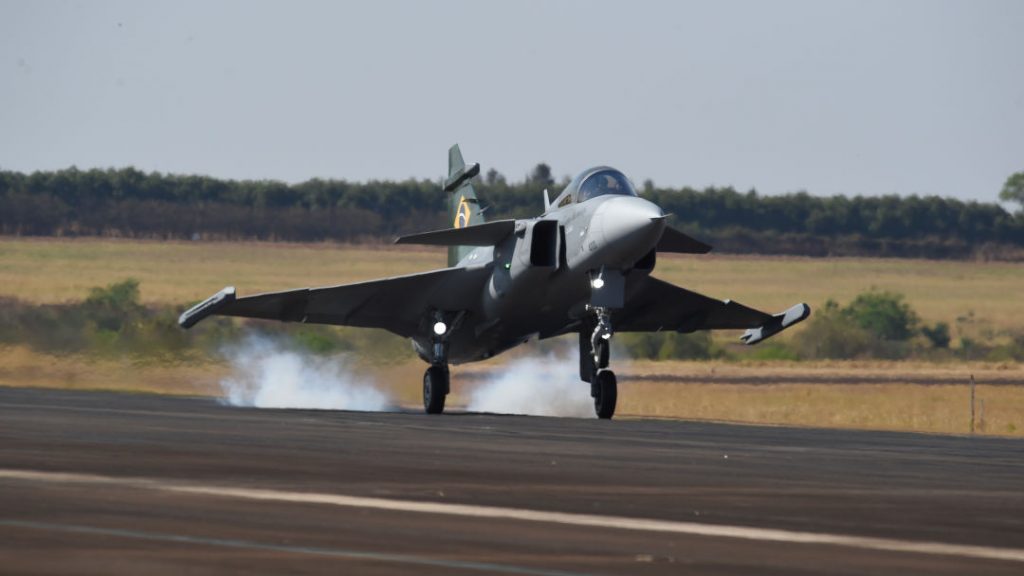 The first Brazilian Gripen E, designated by Brazilian Air Force as the F-39 Gripen, concluded its first flight in Brazil on September 24. The aircraft flew from the airport in Navegantes to Embraer´s facility in Gavião Peixoto. The official presentation of the aircraft is scheduled to take place on October 23 during the country’s Aviator’s Day and the Brazilian Air Force Day ceremony.

“Gripen’s arrival in Brazil and its first flight are major milestones in the Brazilian Gripen program,” said Micael Johansson, President and CEO of Saab. “We are proud of this journey alongside so many qualified and committed professionals from both countries. We are following the delivery schedule for the aircraft and we continue to maintain our long-term commitment to Brazil.”

The Gripen E is one of three fighter-jet platforms – along with the Boeing F/A-18 Super Hornet and Lockheed Martin F-35 Lightning II – competing in Canada’s Future Fighter Capability Project (FFCP), which aims to replace the Royal Canadian Air Force’s ageing fleet of CF-188 Hornet’s with 88 new-generation fighters. In June 2020, Saab confirmed the four corporate partners that will be part of its FFCP bid, including IMP Aerospace & Defence, CAE, Peraton Canada and GE Aviation.

With Brazil’s 2014 commitment to purchase the Gripen platform, Embraer became a major partner to manufacture the aircraft and to also help develop the two-seat F variant of the Gripen – with the E variant being the single seater. In July 2020, Saab Aeronáutica Montagens based in São Paulo, Brazil, started building sections of the Gripen E/F, which are then delivered for final assembly at the Embraer plant in Gavião Peixoto.

As of 2021, the complete assembly of 15 aircraft will begin locally in the country. The first production aircraft is scheduled to be delivered to the Brazilian Air Force, at Wing 2 in Anápolis (Goiás State), by the end of 2021.

“Embraer will play a leading role in the execution of the Gripen program in Brazil and will be responsible for systems development, integration, flight testing, final assembly, and delivery of the aircraft in support of Brazilian Air Force operations,” said Jackson Schneider, President and CEO of Embraer Defense & Security, discussing the arrival of the first F-39 Gripen aircraft. “In terms of technology transfer, the Gripen is a great opportunity to increase our knowledge in the development and manufacturing of advanced combat aircraft.”

With this F-39 Gripen milestone achieved, Saab notes the flight test program will now be expanded to include the Gripen Flight Test Center at Embraer in Gavião Peixoto, which will be fully integrated with the test program already running at full phase at Saab in Linköping since 2017.

Activities in Brazil will include testing of flight control system, environmental control system as well as tests in the aircraft in tropical climate conditions. In addition to the testing that is common for the Gripen E program, Saab explains unique features of the Brazilian aircraft, such as weapons integration as well as the Link BR2 communication system, which provides encrypted data and voice communication between the aircraft, will be tested in Brazil.