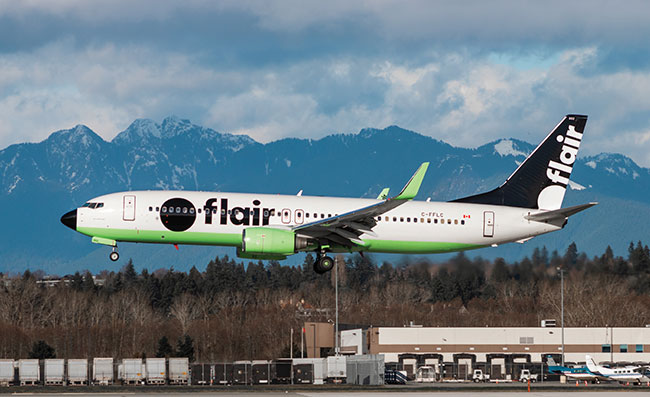 Low-cost carrier Flair Airlines says it is expanding service to eight cities in Canada, bringing its number of domestic destinations to 18 by the summer.

Despite a drop in flight bookings that has led to thousands of layoffs in the air industry in just the first few weeks of 2021, Flair said it is preparing for what it believes will be a restart of tourism and travel beginning in spring and summer.

“We are confident, as travel returns, there is a strong market for low-fare travel choices from a socially responsible Canadian airline,” CEO and president Stephen Jones said.

Starting May 1, Flair will expand service to Ottawa, Kitchener-Waterloo, Halifax and Saint John, N.B. Flair will also add service to Thunder Bay, Ont., and Charlottetown in June, to Victoria in July and a return to Abbotsford, B.C., in August.

The announcement comes as other airlines temporarily suspend domestic and international routes in response to a difficult business environment. On Tuesday, Air Canada said it was suspending more routes to the U.S. and other countries, and will lay off at least 1,500 employees.

The latest Air Canada cuts came about two weeks after Canadian airlines including Swoop, the low-cost rival owned by WestJet, agreed to suspend flights to Mexico and the Caribbean until April 30, at the request of the federal government.

Swoop also suspended transborder service between Edmonton and Phoenix until restrictions are removed.

Still, airlines such as WestJet, Swoop and Air Canada, which have cut domestic routes in recent months, could add service again if travel picks up again in the spring.

Atlantic Canada, where Flair will be expanding with flights to and from Halifax, has been hit hard by flight cancellations, with some cities left without commercial air service.

Flair said in January that it was adding 13 Boeing 737 Max planes to its fleet, in a sign of upcoming expansion.