News Products
Flat And Thin With Colour Is In 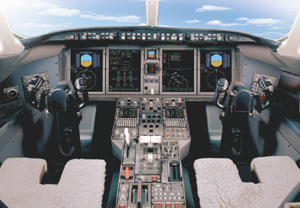 Craftsmen once practised a very special art – painstakingly fixing
chipped numerals on instrument dials, or redoing them altogether with a
brush and fluorescent paint and then later by silk screen. It was
precision work. While there are still shops that do this today, it
seems their days are numbered. Flat, thin, multi-tasking, fully
integrated display units are taking the avionics world by storm. New
product announcements herald the demise of the dial artist.

At
the recent AirVenture 2006 in Oshkosh, Wisconsin, Garmin came out with
some great news for those planning a cockpit refit and for King Air
owner/operators and homebuilders.

In their first announcement,
the Garmin G1000 is finally going to be available for retrofit on King
Air C90s. This is the first time the G1000 will be available in a
retrofit format and with the high level of success, acceptance and use
the G1000 already has, this opportunity will allow older King Airs to
greatly enhance their operational safety and efficiency. Garmin is
waiting for an FAA Supplemental Type Certificate (STC) for the
installation. When that is complete, King Air C90 operators will be
able to choose from a select group of distributors that have met
Garmin’s qualifications to install the G1000 on the C90.

Garmin
says the expected time frame for receiving the STC is around the spring
of 2007. Initially, this STC will include C90 aircraft ranging from
serial number LJ-1164 to LJ-1755 but the candidate aircraft must have a
factory installed APS-65 Automatic Flight Control System.

The
G600 was also announced at AirVenture as another retro solution. This
new system incorporates two individual displays – PFD and MFD – in a
customized package designed for easy retrofit installation. The G600 is
designed to communicate and integrate with Garmin’s panel mount
products, and provides essential information such as attitude, air
data, weather, terrain and traffic. It also has multiple features and
functions that dramatically reduce pilot workload and combine critical
flight data. Displays are in digital format on dual LCD units. Of
special note – the G600 replaces traditional mechanical gyroscopic
flight instruments with a solidstate Attitude and Heading Reference
System (AHRS) and in the process provides superior reliability and
accuracy. Garmin’s AHRS features rapid alignment while moving,
including inflight dynamic restarts. One thing that Garmin have worked
on here is ease of installation. The bezel framing of the G600’s
primary flight display (PFD) and multi-function display (MFD) measures
10" wide x 6.7" high, and allows for an easy fit into the existing
instrument panel in most aircraft. It has been designed to take the
space that is currently occupied by the instrument six-pack (attitude,
airspeed, altitude, vertical rate, turn coordinator and directional
gyro).

For
the home builder set, Garmin have also introduced the G900X – a system
that integrates all primary flight, navigation, communication, terrain,
traffic, surveillance, weather, and engine sensor data into two
10.4-inch, highdefinition LCDs. The colour TFT displays on the G900X
suite boast XGA (1,024×768- pixel) resolution with wide viewing angles.
This product also comes with a distributorsupplied installation package
– after all it is for the DIY set. The kit includes the wiring harness
and installation drawings.

The PFD of the G900X serves to
replace many traditional cockpit instruments. The information covered
by the system is integrated onto a large-format display, and the MFD
puts all aircraft system-monitoring and flight-planning functions at
the pilot’s fingertips. Other features include reversionary
capabilities, allowing all flight-critical data to transfer seamlessly
to a single display. For added safety during flight, a solid-state AHRS
can align itself while in motion, including in-flight dynamic restarts.
There is of course a Digital Air Data Computer, Engine-monitoring
display and Mode S transponder with Traffic Information Service (TIS).
The system will also include integrated radio modules that provide
WAAScertified IFR oceanicapproved GPS; VHF navigation with ILS; and VHF
communication with 16-watt transceivers and 8.33- kHz channel spacing.

The
G900X is a fully digital audio control system and also integrates
Garmin’s SafeTaxi airport diagrams. Among options offered are
integrated satellite weather datalink and digital-quality audio via XM
Satellite Radio, both available and remote Flight Management System
(FMS) controller for simplified waypoint, navigation, and communication
tuning and selection. There is also an option for integrated Class-B
Terrain Awareness and Warning System (TAWS) with worldwide terrain and
U.S. obstacle database, which does not require an external LRU as with
other TAWS systems. Dealers will be able to advise about the Canadian
database. The G900X will be available in the first quarter of 2007 at a
suggested retail price of US$66,745 through Garmin G900X qualified
distributors.

AirVenture is not the only place to get the goods
on new avionics at this time of year. During the recent CBAA Trade Show
in Montreal, many avionics industry OEMs showed their latest inflight
safety enhancements, cockpit revamp must-haves and – for the corporate
set – cabin and passenger service amenities. If you are revamping the
cockpit or redressing the cabin, there are some very interesting
options to consider right now.

One name that is no stranger to
the cockpit is L3. Its big news at CBAA involved the SkyWatch 497
Collision Avoidance System. It now features Verbal Intruder Positioning
(VIP) as well as a five-year warranty to new customers. What the VIP
capability does is extend aural alerts of range, bearing and relative
altitude when a Traffic Advisory (TA) is issued for a threat aircraft.
Users will hear warnings such as, “Traffic, Traffic 12 O’Clock High 3
Miles,” in addition to the normal visual display of threatening
aircraft. Also, SkyWatch VIP systems will now display up to 10 targets
simultaneously, depending on display capability. Of special note, L3
Avionics Systems will offer a VIP upgrade option to all existing
SkyWatch 497 owners for a nominal fee. Any customers wishing to upgrade
their SkyWatch 497 system will need to return the unit to L3 Avionics
for a software 1.8 revision and Mod ‘J’ hardware update.

SkyWatch
HP Collision Avoidance System and Stormscope Model WX-500 will be
included in a new STC for King Air C90s. The STC is being performed by
Garmin International and assisted by Executive Beechcraft of Kansas
City as part of a retrofit program that will encompass the Garmin G1000
cockpit noted earlier. The STC is expected to be complete in the spring
of 2007 and will include the SkyWatch HP as standard equipment and the
Stormscope WX-500 as optional equipment within the STC. Over 7,500
SkyWatch and 45,000 Stormscope systems have been installed in almost
every type of aircraft since 1976.

Sandel has been working the
small, flat and good-visibility retro market too. The firm is now
offering two new product lines that include the LEDpowered, 4×4 SN4500
EHSI and SA4550 EADI, along with a series of new directional gyro (DG)
products, the SG101, SG102 and SG103. These units have modular 4”x4”
primary displays and are the first to feature light-emitting diode
(LED) sources for Sandel’s proprietary LightEngine display technology.
The result is impressive as they provide an ultra-bright,
high-resolution image and boast an MTBF of 10,000+ hours. The new units
offer 180-degree viewing angles and high sunlight readability. And most
impressive, the new SN4500 and SA4550 PDs also serve as drop-in
replacements for older electromechanical displays – making them easy to
install. Both units may be installed separately or in tandem and they
have the SandelSmart I/O to interface with virtually any digital or
analog aircraft.

So there you have it – flat and thin with
colour is in. And now you can have almost the same system in your
weekend recreational flyer that you also have in your corporate
workhorse. And the better news is that this sort of technology is going
to keep coming with more OEMs to choose from and vaster operational
options. By the time the NBAA is said and done, there should be even
more avionics news to share.

As for all those old dial-type instruments – well, they do make cool paperweights!