Quebec’s St-Hubert Airport is a Haven for Student Pilots. 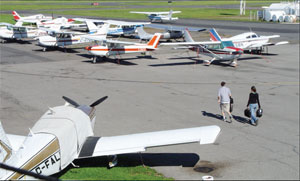 With four flight schools operating cheek by jowl, an almost zero
block-out time onto what is essentially a dedicated GA runway, and with
little other competing traffic, the St-Hubert airport (CYHU) on
Montreal’s south shore is a student’s dream come true.

“We
have all the IFR approach procedures and a controlled airport without a
lot of commercial traffic. Everything is the same as [Trudeau Airport
at Dorval], without the big airplanes. That makes it easier for us. All
the planes go the same speed,” explains Thierry Dugrippe, director and
manager of Air Richelieu, one of the flying schools. There are three
runways: 24R/06L (7,840'); 24L/06R, (3,920'); and 28/10 (2,800').

Many
students come from western Europe, the Middle East, Asia and South
America, drawn by the quality of instruction, bargain-basement course
fees compared to those at home and access to airspace; e.g., Montreal
overflights that make the Old World look positively two-dimensional.

The
phone rings constantly at the front desk at Air Richelieu. Beyond the
lobby’s glass walls, a Piaggio Avanti and a Cessna 172 make a
simultaneous approach on the parallel runways. Upstairs is the Café
bistro de l’aeroport, complete with couches on the terrace and great
airside view.

Flight instructor and director of marketing and
commercial affairs, Francois Gardes – an expat from France – unrolls
diagrams of the school’s expansion plans: The size of the building will
be doubled in length to 88.3×40 feet, and the project includes getting
two Alsim 200 multicrew cockpit 180-degree flight simulators. They will
simulate the Cessna 172, Piper Seminole, Piper Navajo turboprop, the
King Air 200 and Citation S.

“We will use them when people are
training for a Pilot Proficiency Check. Before, the checks were done on
the actual planes, but since Transport Canada allows 50% of the
training to be done on a simulator, Air Richelieu can train company
pilots. It is less expensive,” Gardes explains. “We will have some
contracts with airlines outside the country, and recurrent training for
air taxi operators.”

Air Richelieu already has an Alsim 50 for
IFR training, and 15 aircraft, including a Cessna 150, 172N, 172R,
172SP, Katana D20-C1, Piper warrior, Piper Seminole and Piper Navajo.
The school does some Department of National Defence training; for
example, it expects to get about 20 air cadets next spring. “We have a
contract with the space agency to give recurrent training for pilots
working there. Students from the École nationale d'aérotechnique come
here to fly,” Dugrippe adds.

French, English, Russian and
Spanish are the languages of instruction. “Students from Brazil and
Colombia come here because there are not that many schools and visas
for the US are difficult to get,” DuGrippe explains. “It is the same
for the Russian students.”

Close by is the Saint- Hubert Flying
School, which opened in March 2005. Owner and chief instructor Mohammed
Hamdi has been teaching since 1995, and two more Class 1 and two Class
2 instructors round out the staff. Training courses range from those
for recreational licences on up to commercial, multiengine, IFR and
nighttime flying.

The
MAP is currently programmed to simulate the Cessna 152, 172 and Seneca
PA34 aircraft in the school fleet. “But you can add any type of
aircraft,” Hamdi notes. From a two-screen console behind the student
the instructor creates training exercises; e.g., weather, engine
failures and landing gear and air navigation system malfunctions.

Hamdi’s
students come from all over the world, and the school’s languages of
instruction include English, French, German, Spanish and Arabic. “They
come here and get all the ratings we have to offer, then go home. They
also come to upgrade their licences for more challenging weather
conditions. The best thing about training in Canada is the weather,
Hamdi says. ”Some certified commercial airline pilots flying into
Canada have never seen snow before.”

Hamdi regularly takes
students to the maintenance shop next door and to the control tower.
“When students come back here they have a big smile, because they know
what is happening. This visit helps them feel comfortable and safe. The
students talk to the controllers, learn what the controllers would like
to expect from them.”

The market for pilots is changing, says
Hamdi. “I used to have instructors who couldn’t find jobs, but lately
there are a lot of job openings. The demand overseas is booming. In
Canada graduates have to start up north, for example, but the market is
opening up and the demand for pilots in Canada is rising. When you
finish from here with 200-250 hours, you can get a job with a company
working at a type rating, as a copilot until you accumulate 1,500 hours
to get the Air Transport Pilot’s Licence.”

Another newcomer to
Airport Road is CPAQ.AERO, which opened in October 2005. Wedged between
a glass-walled restaurant called L’Aviateur, with an apron-side view,
and the Air Quasar maintenance shop, nonstop tower-pilot chatter
burbles out of a radio on a window ledge as instructors and students
bustle about.

Company vice-president and Class 1 instructor Eric
Raissac feels its two GPSequipped, two-seat Katana DA20-C1s give the
school an edge. “The Katanas are wellappreciated.” The school has two
Cessna 172s, one of which is IFR-capable and GPSequipped and two Cessna
152s, one of which is long-range, and a two-seat Elite 5 simulator. The
school trains students in English and French for all sorts of licences
and the school is near a decision point on getting a multi-engine plane
with IFR.

“Montreal is a huge reservoir of people,” says
Raissac, who notes that there are not many schools in the region for
the population. About 10% of his students, and growing, come from out
of country. There are six instructors between the Saint-Hubert School
and CPAQ.AERO’s other school in St-Jean-sur- Richelieu.

Raissac,
who has been a commercial pilot for 15 years, feels the pull of the
strong market for pilots, having lost two instructors in the last year.
“There is a shortage of pilots at Air Canada, WestJet … There is a
knock-on effect in smaller companies. There is a shortage of
instructors. It used to be that instructors stayed at a school three or
four years, earning 2,000 hours before hoping to get a job. Now you can
get a job with less than 1,000 hours,” he explains. For a newly
graduated pilot with a commercial licence, Raissac suggests some
possibilities. “Become an instructor or work as a fire patroller
looking for forest fires. Or you can fly a parachute plane.”

A
blue and white King Air turboprop is parked just a few feet outside the
airside entrance to the Max Aviation flying school. The lobby,
outfitted with earth-tone tiles on the floor and back wall,
complemented with rich blue trim details and a wood-paneled reception
desk, symbolizes the bush and fishing camps that are the 1960s roots of
the Prud’homme family business.

This is home base for the flying
school and Cargair Ltd., a charter company. The school has eight Cessna
150s and eight 172s, two Piper Aztec PA23s and two Navajo PA-31s. All
are GPS-equipped and some of the Cessnas are IFR-equipped. One Aztec
and both Navajos have de-icing ‘boots’ on the wings.

Students
use an Elite 6.0 simulator to train on all of the school’s aircraft
types, as well as Cargair’s King Air turboprop. There are 16
instructors, ranging from Class 1 to 4. The chief instructor, Lorraine
Dumont, has 16,000 hours of flight instruction. The languages of
instruction are English and French.

“We currently have over 100
students at the two schools [the other one is in Mascouche], and over
80 of the active students are at St-Hubert,” says Josée Prud’homme as
she sweeps papers left and right to clear a patch of desk for her
visitor. Vice-president of Max Aviation, she gave up her previous job
as a corporate lawyer – but not her need for speed – in a big Montreal
firm to replace her brother, who left the family company to fly with
Airbus. “France, Switzerland, Tunisia are three big sources for
students. We made a count the other day and we have representatives
from 14 different countries.”

Max Aviation recently became one
of only 12 schools around the world accredited by CAAC (General
Administration of Civil Aviation of China) to train Chinese pilots. “It
is a very difficult, long, expensive process to get this accreditation”
says Prud’homme.

The school offers every type of certification,
including becoming qualified in the King Air. “You don’t learn to fly
in the King Air, but if you want to check out on it as a licensed
pilot, you can; you cannot be accredited by the Chinese if you do not
have highperformance aircraft.”

As for the job prospects for new
pilots, Prud’homme says: “Right now they are very good. Aviation is
very cyclical, but we are in a couple of years when it is very good.
People are missing pilots everywhere, from small companies to big
companies around the world. It is the time to graduate.”