What makes a brand new flight school an industry leader in just a few short years? 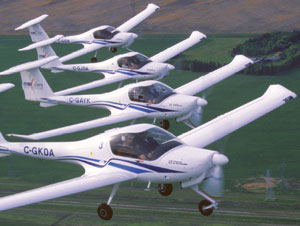 What makes a brand new flight school an industry leader in just a few short years? For Michael Gillespie, president and founder of Winnipeg-based Flying Colors Pilot Training, it is a business plan built on three pillars: technology, partnerships and customer service.

For Gillespie, who grew up around airplanes, it was recognition for a path he almost did not take. Formerly trained in computer science and new products management at the University of Manitoba, Gillespie was more interested in broadcast engineering and the manufacture of specialty electronics. It was not until he watched his brother win the 1991 Canadian Aerobatics Championship that he experienced what he describes as “the brotherhood of aviation”. He obtained his private pilots license in 1996.

As an entrepreneur, Gillespie began considering full-time aviation activities. The Flying Colors Precision Flight Team was the result. The idea was inspired by the EAA Young Eagles program to introduce youth to aviation. While developing the business plan, two factors converged. First, the team would require a Transport Canada Operating Certificate; second, he had not been impressed by the flight training offerings in the mid-90s when he had decided to pursue his own licence (in fact, he bought his own aircraft and hired a private instructor).Thus came the foundation for Gillespie’s three pillars.