Virgin Orbit launched a rocket from a plane – here’s how

Earlier in 2021, 10 cubesats – small, cheap satellites weighing about a kilogram each – were sent into orbit around Earth. With almost 1,500 of these small satellites launched so far, adding another 10 might seem trivial. But this was no ordinary launch. Instead of lifting off from the ground, the rocket carrying these National Aeronautics and Space Administration (NASA) satellites was slung under the wing of a modified Boeing 747, called Cosmic Girl. The plane carried them to a height of 11km (6.8 miles) before launching the rocket.

This milestone was the first successful launch of Virgin Orbit’s LauncherOne rocket, marking the start of its commercial ventures. The company hopes to provide cheap, flexible satellite launching services, without the need to use sites on the ground.

But how does launching a rocket from a plane actually work?
Usually, a rocket launched from a launch site on the ground will have two or three stages, which allow the rocket to shed weight as it uses up fuel. The first stage is the part which ignites at launch, powering the rocket from the ground. When the rocket reaches a certain altitude, the first stage then separates, leaving the second to ignite. A third stage operates on the same principle and typically places the payload – the part we want to get into space – in its final orbit or interplanetary trajectory.

When satellites are launched from a plane, the carrier aircraft functions as both a launch site and a reusable first stage of the rocket.

Aircraft are more efficient than rockets at getting off the ground, but they cannot function without an atmosphere to generate aerodynamic lift. Air-launching takes advantage of this by attaching a rocket to an aircraft and releasing it at high altitude.

As well as saving fuel getting off the ground, aircraft launches offer other benefits, including the costs of traditional rocket launches being repeatedly delayed by bad weather conditions. With an aircraft, it’s easy to change launch sites because it can take off from a commercial airport. Pesky weather conditions can simply be flown around, and different launch requirements for different spacecraft can easily be accommodated.

There are limits
Of course, air-launching isn’t a perfect solution. The size of rocket is limited to the carrying capacity of the aircraft. A dedicated carrier aircraft may be able to carry much more, but for now there is not much scope for larger launchers.

Stratolaunch, the developers of the enormous carrier aircraft of the same name able to carry a rocket weighing 250 tonnes, abandoned its heavy-lift launch vehicle program in 2019. For comparison, LauncherOne weighs 30 tonnes, and will only be used to carry small satellites.

Launching a rocket 10 kilometres from the ground saves some fuel, but most of the fuel requirement to achieve orbit is not in gaining height, but getting it moving with enough speed so that it falls into orbit. While the flight speed of an aircraft can make a small contribution to this requirement, the fuel saving from air launch is not as large as it might first appear.

A relatively small launch vehicle, LauncherOne, has the capacity to launch 500 kg into low earth orbit. Heavy-lift launchers like Ariane, Delta and Falcon can launch many times this weight, and will continue to be used for large satellites and interplanetary missions.

But large, expensive launches aren’t Virgin Orbit’s target audience. For small satellites, cubesats, micro-satellites and nano-satellites – all of which are being rapidly adopted by the space industry – air launches could represent a significant improvement in versatility and, crucially, cost. 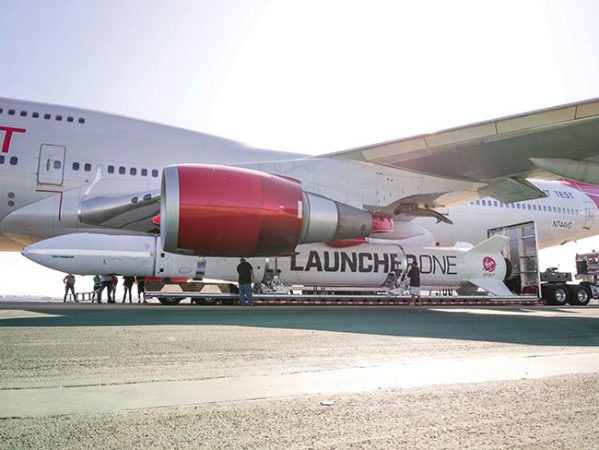 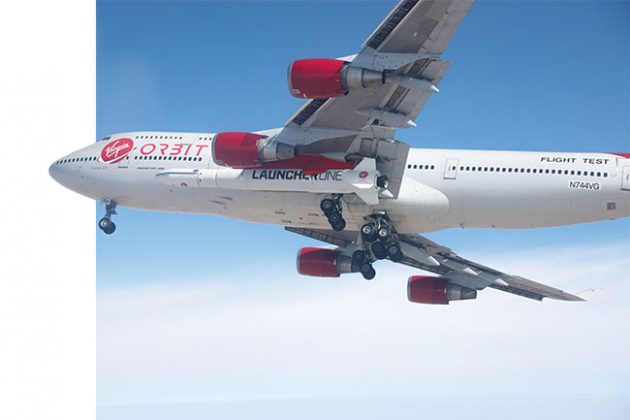 What’s next?
The idea of air launching has been around for some time. NASA launched a Pegasus rocket from a B-52 bomber as long ago as 1990. The Pegasus launch service is still operational and has completed 39 successful flights, but its launches are expensive and only four have been made in the last 10 years.

In the short term, several launch contracts are already in place. Longer term, there are plans to expand the LauncherOne rocket with a third stage, which may be able to place smaller satellites – 50 kg or so – into much more distant orbits to fly past Mars or Venus.

There are not many other air launch programs in development. SpaceX abandoned an air-launched Falcon variant way back in 2012. The Pegasus launch vehicle still exists, but hasn’t launched since 2019.

British aerospace company Reaction Engines aims to fully combine aircraft and spacecraft with the SABRE engine, which can function like a jet within the atmosphere and a chemical rocket in space. But this project has been delayed multiple times and may still be some distance from making its first commercial launch.

As the provision of launch services moves ever more into the private sector, LauncherOne must make an economic case to survive in an increasingly competitive market.

There aren’t yet many direct competitors for small individual launches like those offered by Virgin Orbit, although heavier launchers from more established companies such as SpaceX can compete by launching several small payloads on the same rocket. It remains to be seen if the system’s versatility and relatively low cost will win out. | W

This article was originally published by The Conversation. In addition to working on MIXS, Simon Lindsay is a researcher in the School of Physics and Astronomy, University of Leicester.