A slow start – but things are heating up 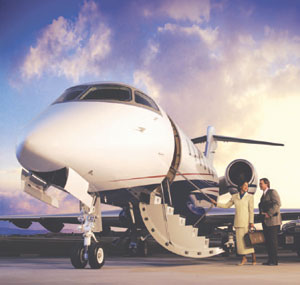 New aircraft deliveries around the world are reaching record highs. The
resale of previously owned aircraft is an equally busy market. And
charter operators are running at capacity some weeks while fractional
operators are not just replacing, but growing their fleets to meet
increased demand.

The
number of corporations that have come to embrace the corporate aviation
concept, through charter use, single-owner, co-owner or
fractional-owner arrangements, has obviously grown. But while some
might take this as a signal to go and buy a couple of aircraft, hoping
to make a fortune in the operation and management business, caution and
patience are key words. Those who are meeting with success, especially
in fractional ownership, have not arrived at this point easily. It
takes deep pockets, a great deal of patience and a very stable business
environment for corporate aviation operations just to survive,
especially in a market as closely defined and limited as Canada’s.

Fractional
ownership involves several parties sharing the acquisition, operation
and support costs of an aircraft. The amount of the share owned can be
as little as 1/16. The number of flight hours per month that the
aircraft can be used is governed by the size of the share owned. The
fractional owner pays a fixed monthly fee for the aircraft, fuel, crew,
catering, landing fees and other expenses for each occupied flight
hour. Fractional owners get the use of an aircraft that is comfortable,
at a location and time convenient to their schedule, and with all the
other benefits of corporate aviation – without the heavy cash outlay or
managerial tasks associated with the conventional flight department
operation.

Looking south of the border, things would seem to be
doing well. NetJets is without question the really big gun in the
business. It recently announced plans to add another 450 pilots and 76
new aircraft in 2006. If this happens, it will be an increase of 19%
over the firm’s current flight crew complement. At present, the NetJets
fleet numbers somewhere in the area of 420 aircraft, which are reported
to have flown 300,000 flights to over 140 countries in 2005. One
interesting aspect of its business is that in 2005, NetJets announced a
new labour agreement with its pilots that resulted in salaries among
the highest in the industry.

In other news from south of the
border, Bombardier’s Flexjet is planning to add 135 pilots, and up to
20 Learjets and Challengers this year. There are also reports that
Flight Options and CitationShares, while not planning to hire
additional drivers, plan on taking delivery of 5 and 24 business jets,
respectively. Also, Avantair, which sells shares in Piaggio Avanti twin
turboprops, is reportedly ready to hire 80 to 100 pilots and take
delivery of 24 Avanti IIs by year-end.

In Canada, we first
started really talking fractional about four years ago. At that time,
there were two firms that presented themselves as actively involved in
the business. One was Calgary-based AirSprint, which at that time had a
small fleet of PC12 turboprop aircraft and was adding a Cessna Citation
business jet. The second was Toronto-based Jet Share, which was just
starting up with its first Citation Bravo. Both have since shown
steady, but not rushed, growth.

Today, Judson Macor, AirSprint
president, reports 15 aircraft in the fleet, comprised of 11 turboprops
(primarily Pilatus PC12s), and four jets (primarily Citation Excels).
During the next 12 months, he expects to add an additional two jets and
two turboprops for a fleet total of 19 aircraft. Macor expects similar
growth the following year, the net result being a fleet of
approximately 25 aircraft by the end of 2007.

AirSprint
currently has 70- 75 fractional owners. Macor says the cost of a
fractional aircraft acquisition, based on a 1/8 interest (which equates
to 100 occupied hours per year) is:

One thing that has scared
folks away from charter and fractional operations in the past has been
the extra costs that pop up. Macor and his team have really simplified
the process. AirSprint does not charge crew expenses, positioning
expenses or surcharges for one-way flights. A fractional owner who
wishes to leave the program receives the proportionate share of fair
market value of the aircraft at the time of departure. So the purchase
price of the fractional interest is considered as a “parking of
capital” while the fractional owner is in the program.

Overall,
AirSprint reports very significant growth, having more than doubled
revenues last year to achieve gross revenue levels of $35-50 million.
The single biggest challenge to the business, in Macor’s opinion, is
educating the Canadian public that fractional aircraft ownership
service exists in Canada. He says he is constantly being told by new
clients that they would have acquired the service much sooner had they
known it existed. As such, he thinks it is a bit premature to open up
the market to foreign competition as there is an imbalance in the
maturity of the respective industries between Canada and the US.

In
the case of Jet Share, a large expenditure on marketing and promotion
in the consumer business media has, according to company president
Michael Bannock, been effective but slow, and needed time to show
itself. Today, Jet Share has three aircraft – the original Citation
Bravo plus a Citation VII and a recently acquired King Air 350. Bannock
says he had planned to keep Jet Share as an all-jet operation, but
client need to service some specific markets that did not offer a “jet
friendly” environment led to the acquisition.

Jet Share also has
two previously-owned Citation VIIs “in work” at Cessna in Wichita.
Bannock points out that having three same-type airframes will allow him
to realize some operational and cost effectiveness. And while it will
be a five-aircraft operation by this summer, should current interest
and market activity continue, he feels it could grow to as many a 10
aircraft in the next 12-24 months. Jet Share has a definite regional
bias to its business – the ‘Golden Horseshoe’ that runs from Toronto
around the west end of Lake Ontario. Bannock sees the region as his
best market for now and is focused on supporting the business there. In
the immediate future, apart from the addition of new aircraft, the
simple fact remains that the company must grow into new hangar and
office space. Consolidation of the separate flight ops and business
offices into one – with the aircraft and maintenance support – will
occur in the coming months.

As for the structure of its
fractional ownership, Jet Share works in 1/3 shares. Today it has nine
shareholders in the current three aircraft and six in the two new ones
coming on line. For their operation, this share split works best. The
aircraft are serviced to reflect individual clients’ likes for each
flight. One client/shareholder always wants a copy of all the current
daily papers on board, while another has specific beverage preferences.
The key here is that Jet Share keeps client profiles and makes sure the
cabin is almost an extension of the clients’ home or office when they
step on board. So depending on who is travelling, the cabin is dressed
to their preference with information from the profile. Bannock feels
that this level of attention and customization is what has driven his
success.

Looking down the road, Bannock is one of the Canadians
who stepped up to the VLJ bar a few years back and placed an option on
the new Cessna Mustang. Slated for delivery in 2008, he feels that
there is a great future for VLJ aircraft in the Canadian fractional
market. That having been said, in the US the FAA has drastically cut
down on the numbers of very light jets estimated to take to the air in
the next decade. It now forecasts that 100 of these jets will join the
fleet next year, growing to 400 to 500 VLJ deliveries per year through
2017. Earlier figures warned there would be an onslaught of 8,700 VLJs
by 2016, but that would not appear to be the case now.

One firm
that has taken a positive stand on VLJs as fractional aircraft in the
very near future for Canada is JetSet Inc. Its program launch took
place at the Canadian International Auto Show in Toronto in February.
The program uses the MS760x, a four-seat, twinengine jet aircraft – a
derivative of the MS755 Fleuret that lost the military trainer
competition against the Fouga Magister in 1953. Also known as the Paris
Jet, there was one on display at the show. A total of 20 aircraft have
been ordered for Canada and the US with initial deliveries scheduled
for March. Their fractional shares are selling for US$60,000, which
entitles the owner to a minimum of 25 hours per year. Designed and
manufactured in France during the 1960s, some 165 aircraft (Paris I and
Paris II models combined) were produced for the French Air Force (36
planes), Navy (14 planes) and the air forces of Brazil, Argentina and
Paraguay. So while these fall into the VLJ category, they are not new
aircraft but rather remanufactured with new avionics, paint, interiors
and refreshed engines.

Outside the VLJ market, there are other
new players in the Canadian fractional industry. Calgary-based Avia
Aviation came into the market a couple of years ago. It has three
Piaggio P-180 Avantis in its fleet and plans for three additional
aircraft to join them in the coming year.

Bombardier recently
announced that it is finally joining the Canadian market, having just
published information that its Flexjet program is being launched in
Montreal with three aircraft. The Canadian-registered aircraft are
formerly from the Bombardier corporate fleet. Flexjet will initially
launch the service with two Learjet 45 aircraft and a Challenger 604
widebody business jet, all of which will be based in Montreal. Along
with providing point-to-point travel within Canada, Flexjet also plans
to utilize its new capacity to more efficiently service existing owners
who travel between Canada and the US. This is where size counts, and
having such additional resources will afford Bombardier some level of
market advantage.

There is some serious discussion under way
between Canada and US to change current regulations that disallow
blended fleets between the two nations. If that happens, we could see a
levelling of the playing field with each of the current and future
fractional operators in Canada being given the opportunity to expand
into the US – or, more realistically, create mutually beneficial
relationships with selected US fractional operators. Size counts here
and the larger a fractional fleet, the more benefit to the
participants. Creating blended, common aircraft fleets can also create
operational and maintenance cost savings – and that too would be a
benefit for all.

So while slow off the start, fractional is
gaining acceptance and interest in this market. The boom of interest in
corporate travel will fuel this interest for the coming years. The
possibility for cross-border harmonization also bodes well for the
fractional user and could provide new opportunities for operators on
both sides of the border. But then again, like everything in aviation –
hang on because it might all change again tomorrow when someone comes
up with the next great idea.