News
From the ground up

There is a maxim in national politics; think global, act local. It appears to have also taken root in Canadian air transport as the Greater Toronto Airports Authority (GTAA) launches an ambitious strategy to grow Toronto Pearson International Airport into a global mega hub serving as many as 80 million passengers a year, while at the same time, positioning Canada’s busiest airport as the heart of a regional bus and light rail network. The GTAA insists the strategy is two sides of the same coin. 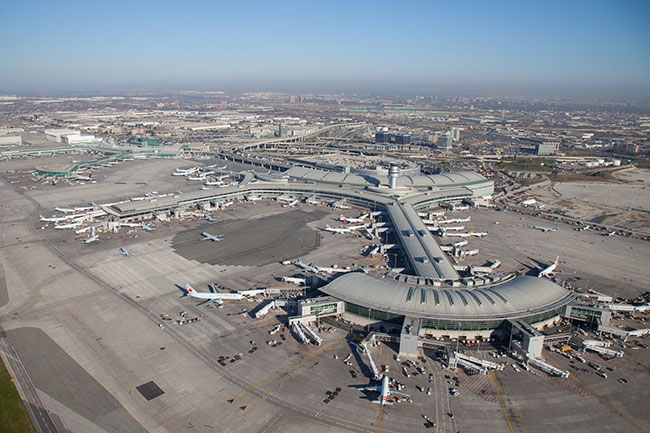 Toronto-Pearson ranks 32nd out of the world’s 100 busiest airports. The airport handled 44.3 million passengers in 2016, a year-over-year increase of eight per cent, with strongest growth coming off the international side. The airport is second only to New York’s JFK in terms of international passengers, and currently connects with 67 per cent of the global economy.

To almost double its traffic and expand its coverage to more than 80 per cent of the world’s economic centres over the next 20 years, Toronto-Pearson will be responding to average annual growth of approximately 2.8 per cent, with most of that coming from international and connecting sectors. While the target is on the ambitious side, it is not unprecedented as illustrated by similar experiences at Frankfurt-Main, Hong Kong and Singapore.

The GTAA believes that most of the ingredients are in place to achieve its goals. They are not alone. Air Canada views Toronto as essential to its own global strategy. “When you look at Toronto and its geographic location, we are sitting on a gold mine,” Benjamin Smith, Air Canada’s president of passenger airlines told Wings at the launch of a new branding strategy earlier this year. “We have five runways, no slot restraints, reasonable curfew hours and route rights to anywhere we want to fly.” Air Canada has plans to grow its share of international traffic at Toronto to above 50 per cent.

It is not just Air Canada that is looking to expand its global origin and destination (O&D) and connecting traffic out of Toronto-Pearson. WestJet’s recent order for 10 Boeing 787-9 Dreamliners (with options for another 10) will enable the airline to add new destinations in Asia and South America, and expand existing services to Europe, currently being operated by 737 and 767 equipment. WestJet will begin taking delivery of its 787s in the first quarter of 2019.

Interestingly, the mega hub strategy is pinned to the success of the ground piece, even though building a mega hub means expanding a segment of passenger traffic that will never set foot outside the terminal building. Currently 32 per cent of Toronto-Pearson’s passenger volume is transfer traffic. The GTAA will need to grow this between 40 to 50 per cent by 2035.

“As connecting volumes increase they start to support more O&D traffic. Those O&D passengers need to get to and from the airport. Employees also need to get to and from the airport. We need for Toronto-Pearson not to be choked off because of increasing levels of road congestion,” Waechter says. “Only 10 per cent of the airport’s passengers currently use public transit, versus 36 per cent for London Heathrow, 40 per cent for Amsterdam Schipol and 60 per cent for Shanghai Pudong, which is connected by a magnetic levitation (Maglev) train, that whisks passengers to the city centre in under 10 minutes.

“If we can’t resolve the congestion issue for ourselves and the region, our collective prosperity becomes compromised.”

While Toronto-Pearson is a magnet for a 320,000-regional employee zone – the second largest in Canada – a regional transit centre will do more than help employees get to work.

The centre will feature integrated terminal passenger processing with check-in and bag drop facilities. Over the longer-term, the GTAA would like to enhance the return portion of the trip by adding customs processing and bag pick up.

An integrated regional transit centre is consistent with the GTAA’s approach to rolling out the mega hub strategy before expanding, through more efficient use of existing terminal facilities.

“We have a long-range infrastructure plan that leverages our existing facilities before building new,” Waechter explains. “We will have to eventually expand the terminals and aprons to accommodate more aircraft parking and processing – a typical industry standard often used to measure utilization of existing terminals and apron is the number of annual passengers per gate handled. Our long-range infrastructure plan anticipates upwards of 500,000 passengers per gate. Although that gets more complicated when you are parking actual airplanes with a specific sector and aircraft mix.”

Where the GTAA is confident that it already has the capacity to grow to 80 million is runway capacity.

While passenger traffic at Toronto-Pearson grew eight per cent last year, the number of aircraft handled was just over two per cent, as airplanes got larger and airlines squeezed in more rows of seats. In the last five years, the average aircraft size arriving at the airport increased from 113 to almost 130-seats.

The mega hub strategy acknowledges that average aircraft size will continue to increase, Waechter adds. “We have excellent folk in the operations unit who seem to be able to magically park more and more airplanes on the building. Every year we think this is the year we might have to increase our busing, and every year they manage to make it work.”

While so many of the key ingredients to transform Toronto-Pearson into a mega hub are already in place, several others are still missing from the mix, including many outside the GTAA’s immediate reach.

Meaning that for the airport to grow to its full potential, other partners such as the federal, provincial and municipalities, and the Canadian Air Transport Security Authority (CATSA) are going to have to step up.

“We need some things,” Waechter concedes. “Inside the building, we need to put in place more resources so that passengers can transit more quickly, not only on their departing flights through security and U.S. customs, but also inbound through the Canada Border Services Agency (CBSA).” There are encouraging signs that government partners are listening.

Streamlining arrivals processes so that international and trans-border passengers transiting through Canadian airports no longer retrieve checked bags before clearing customs has been a big win for the Canadian airport industry and sets us apart from U.S. airports for transiting passengers.

The same appears to be happening groundside. There are four local transit operators and Metrolinx, a provincial agency that operates the GO commuter rail/bus network and the UP Express, dedicated rail link that connects downtown Toronto with Pearson.

With the obvious exception of Metrolinx UP Express, all have previously failed to close the loop and properly integrate the airport into their networks. That too is changing. “We have been overlooked historically,” Waechter admits. “Folks in the province and municipalities understandably viewed Toronto-Pearson as a federal animal, so they would have to work around it. We have shifted the conversation successfully in the last few years, and we are working more collaboratively with us in the future planning of a regional transportation network.”

The province is conducting an environmental assessment on a $21 billion high-speed rail service between Toronto and Windsor with stops at Toronto-Pearson.

A more urgent priority, however, is funding to extend Crosstown, a multi-billion rapid transit line being built by Metrolinx that will run along Toronto’s east-west spine out to the airport. Crosstown will be operational in 2021.

There are many other items that need to be crossed off the GTAA’s “to do’ list.” “As we become more efficient with our own processes, what we need from government is for them to be more efficient at processing people through customs inspection and security screening,” Waechter points out. “Other airports are much better at that.”

The GTAA estimates that Toronto-Pearson requires an additional $5 million annually in funding for more CBSA officers to meet a standard screening of 90 per cent of passengers in 20 minutes or less, including peak hours.

The airport also needs an extra $20 million in CATSA funding to meet a standard screening time of 95 per cent of passengers in 10 minutes.

In addition, the GTAA will have to invest approximately $60 million, including $30 million from CATSA, to install CATSA

Plus, a next generation screening process that has been successfully tested at Montreal-Trudeau and other Canadian airports, and is now operational at the Calgary International Airport. CATSA Plus will begin to roll out at Toronto-Pearson later this year.

The GTAA is also pressing the federal government to lighten up on duty free regulations, and free up Canadian airports to join the global trend toward arrivals duty free shopping.

“Obviously, we would like to get more rational policies around arrivals and departures duty free. If we don’t catch up to how the rest of the world is handling those things, we will be left with an eroding duty free market,” Waechter predicts. Duty free shopping will either take place at the O&D airport, or on the aircraft.

While the end game is upwards of 80 million passengers by the mid-2030s, there is no published timeline to put the individual pieces for the mega hub strategy in place.

The GTAA is working on a masterplan update, which it expects to release later this year. One wild card could be privatization, and whether potential equity partners would be onboard with the vision, especially for a regional transit centre, which will cost billions of dollars to build and reduce the parking revenue stream.

“A decision to change our not-for-profit business model is ultimately the federal government’s decision to make,” Waechter says. If that is going to be the case, what we are saying here is the mega hub strategy and why that strategy is important to the GTAA and to Canada. Having a multi-modal hub is a clear piece of essential infrastructure, and is reflected in our observation of other mega hubs.”

In any case, the GTAA is already thinking about disruptions to the parking business model as more passengers use curbside pickup and drop off, and the potential of self-driving cars reduces demand for parking spaces.

“Parking facilities are a very expensive investment,” Waechter points out. “It might be a better road ahead to get more yield out of our existing facilities. Imagine autonomous vehicles that are continuously circling and picking people up. Do we need to create more parking spaces for single passenger or two passenger vehicles?”

Finally, there is the question of the mega hub concept. As airplanes such as the Airbus A350 and Boeing 787 scratch the itch for greater point-to-point service, can demand for large, global transfer airports remain viable?

“There will always be a need for global hubs,” Waechter insists. “We are getting more point-to-point routes. But point-to-point must be supported by O&D demand. To the extent that this demand is emerging or doesn’t exist for a market, that is where a hub comes into play.”


Related
GTAA’s Eng to retire in 2020
Only two weeks into 2008 and GTAA welcomes 1 millionth passenger
GTAA notes growth in passenger activity, income
Colouring outside the lines