Rising fuel prices should be a boon for FBOs. That might have been the case once. But the customer has clout. 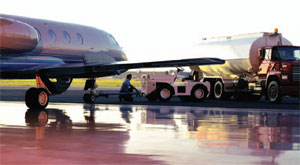 At least one major FBO operator would like to turn off the fuel taps
and concentrate on the hangar and lounge aspects of his operation. It
is a pipe dream, of course. Airplanes have to go where the gasoline is.
But fuel sales are no longer the backbone and profit centre of an FBO.

This
was not always the case. At the beginning of the FBO business there
were few facilities or ramps where aircraft taxied for service. Most
operations were little more than a fuel truck dispatched from the
refiner or local oil sales rep to wherever an aircraft landed. It was
not until the government fostered the development of formal airfields
that fixed bases of operation came into being. And even then there was
little manoeuvrability over the price of fuel.

According to
several FBO managers across North America, retail or rack pricing is
all but dead and has been replaced by a sophisticated system of
charge-card or bulk-reseller agreements. Where familiarity and
frequency as an aircraft operator was once the ticket for shaving a few
cents off the cost per litre, preferred or reduced rates over the rack
retail asking price now lies in a growing number of loyalty programs.

None
of these offerings are limited as to size. Several of the groups
offering a bulk fuel reselling service are local independent
operations. The majority of these programs, however, are managed by
large multinational operations such as Piedmont Hawthorne (now part of
the Carlyle Group) and Signature (not yet in Canada) who use their
buying muscle to purchase fuel directly from the refiner and resell it
to operators in increments. The advantage to the fuel refiners is
volume. The advantage to the operator is preferred pricing without
having to haggle at the retail pumps. All of this comes at the expense
of the FBO operator who sees a once-lucrative part of his revenue
stream narrowing. To counter this, fixed-base operators have started to
incorporate bulk or quantity discount rates into leases for their
resident or tenant operators. In doing so, they have linked fuel
pricing to other performance and cost aspects of the tenant lease. In
the process of developing such agreements, the FBOs have brought their
fuel supplier into the mix so that the rate can apply across all
likenamed FBOs. While this in itself does not necessarily result in
greater direct profit for the individual FBO, it does keep sales within
the family and can result in more shared revenues between the FBO and
fuel supplier. Some FBOs have gone a step further, inserting a
tethering clause into the tenant lease, stating that a tenant must gas
up on the landlord’s fuel exclusively, at its rate and not by any other
group or discount means.

This tactic is not without controversy.
FBOs counter with the argument that they have already been pushed to
the wall over the ability to turn profits and must find new ways to
ensure financial viability. That means agreements on exclusive fuel
supply or added user fees. Indeed, some FBOs have introduced ‘airplane
fees’ – a method whereby the fuel reseller agrees to pay a fixed cost
per litre for pumping fuel into the aircraft. Typically these fees are
minimal and by no means cover the profit that would be realized through
retail or rack-rate sales.

For the operator, a network of bulk
and discount programs and exclusivity contracts may be more complicated
than the days of rack rates, but the savings can be substantial
depending on buying habits and negotiating skills. Once again, it is
important to do your homework.

For example, some independent
FBOs – especially in the US – have eschewed the bulk and discount
business model altogether because the concept does not deliver
sufficient revenue to cover operating and capital costs. And bulk
agreements are not without clauses that could unnecessarily drive up
the cost of the annual fuel bill.

Many programs, for example,
are based on an upfront agreement regarding total annualized volume. If
an operator misses the volume target, it might be short-rate billed (a
so-called 13th bill to make up the difference) or slotted into a higher
per-litre rate upon renewal. A better arrangement – and this can be
found if you look hard enough – is to get fuel pricing based upon a
sliding scale. An operator agrees to a fixed rate on an agreed number
of litres which is lowered once that threshold is passed. As volume
increases, the cost per litre goes down. In some cases, operators can
negotiate a rebate on volume already purchased once the next plateau
has been reached. This agreement benefits the operator and
refiner/reseller since it is based upon rates for real use with
built-in rewards for customer loyalty.