July 24, 2012 – After covering about 6,000 kilometres during its first intercontinental roundtrip journey between Europe and Africa, the experimental solar airplane of Bertrand Piccard and André Borschberg, landed in Payerne (Switzerland) at 08:30 pm today.

July 24, 2012 – After covering about 6,000 kilometres during its first intercontinental roundtrip journey between Europe and Africa, the experimental solar airplane of Bertrand Piccard and André Borschberg, landed in Payerne (Switzerland) at 08:30 pm today.

Piloted by Bertrand Piccard this final flight between Madrid and Payerne, with a stopover in Toulouse, concluded the world's first roundtrip solar-powered intercontinental flight. This journey to Morocco, which started on 24 May 2012, consisted of eight flights totaling about 6,000 km and 13 hours and 29 minutes. With Bertrand Piccard and André Borschberg taking turns in the single-seater cockpit, it brought Solar Impulse to Madrid, Rabat, Ouarzazate, Toulouse and back to Payerne. The most challenging destination not only for this aircraft but for commercial ones as well was Ouarzazate (Morocco), a region rich in turbulence and strong winds.

This year’s Crossing Frontiers mission flights have further proven the reliability of the aircraft’s technology and the efficiency of its energy consumption. Often landing after midnight to avoid thermals, it was almost always brought back to the hangar with a full set of batteries. Originally built only to prove the possibility of flying day and night (26 hour flight completed in 2010), the HB-SIA prototype is now in the process of collecting a number of distance world records for solar aircrafts, documented and being verified by the International Air Sports Federation (FAI), in straight distance, free distance and distance along a course.

“It’s been an extraordinary adventure not only for what we’ve achieved with this airplane, originally only designed to demonstrate the possibility of flying day and night with a purely solar energy, but also for what has resulted in a tightly fused team, confident in the project and in their capacity to make it happen.” said André Borschberg, CEO of Solar Impulse. “I am proud what we’ve been able to accomplish together, all of us, from the engineers that have built a fantastic airplane, to the Mission team experts that found a safe but successful strategy to the ground crew who had to operate in challenging conditions and multimedia team who under any circumstance brought the message of the project to the public. The world’s first intercontinental solar-powered flight would have never happened without the fantastic support provided by all people that crossed HB-SIA’s way.”

Bertrand Piccard, Initiator and Chairman of the Solar Impulse Program, said as the ground crew opened the canopy. “The success of this mission was not only aeronautical: it also stands in the quantity of positive emotions we managed to bring to the cause of renewable energies.”

This intercontinental flight campaign, under High Patronage of His Highness The King Mohammed VI and upon invitation of the Moroccan Agency for Solar Energy (Masen), allowed Solar Impulse together with Masen to raise awareness about solar energy’s potential and about Morocco’s pioneering solar plan whose goal is to build the world’s largest thermo-solar plant in the region of Ouarzazate. This month of events in Morocco underlined Solar Impulse’s and Masen’s common message: to invest in innovative projects today for job creation and sustainable growth while also decreasing dependency on fossil fuels.

“This Moroccan mission was a success from all angles as well as an extraordinary human experience. Apart from the interactions with the extremely qualified and multidisciplinary Solar Impulse team, this event was an occasion to share our convictions, our values and our engagement with national and international communities thanks to the mobilization of thousands of people during the events we organized on the runways of Rabat-Salé and Ouarzazate and thanks to the millions of viewers through the media.” said Mustafa Bakkoury, President of Masen.

Official and public visits of the aircraft were organized in Rabat (Morocco), Ouarzazate (Morocco) and Madrid (Spain) respectively. Seven Ministers, politicians, students, civil society organizations and associations had a chance to see the aircraft and learn about the program's pioneering spirit and the huge potential of clean technologies thanks to the speeches and conferences given by Bertrand Piccard and André Borschberg throughout the mission. But the events didn’t only occur locally. Globally, since the beginning of the mission flights there have been about over 2'723'391 unique visitors of the solar impulse website and over 4'164'130 viewers of the LIVE broadcastings. 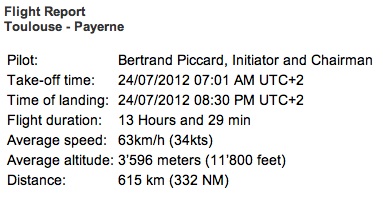