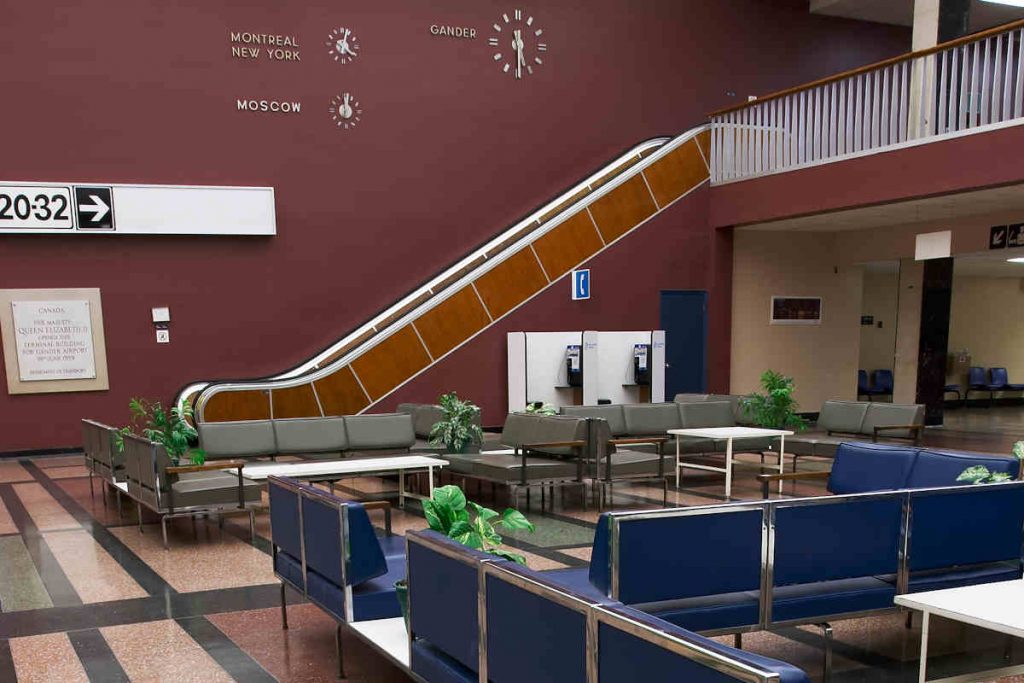 As a child, Percy Farwell would sit in the international lounge at the Gander International Airport and watch people pass by.

Farwell wondered where they were coming from or going on his perch near Arthur Price’s Wandering Birds’ sculpture in the centre of the lounge.

He and his friends were regulars at the airport. On many summer days, they’d hop on their bikes and head for the lounge.

It was their way to pass time in the central Newfoundland town. There, they’d find the best ice cream in Gander, pop quarters into the helicopter game found at the bottom of the escalator and just enjoy the space.

“It is important from a heritage perspective,” said Farwell, now the mayor of Gander. “The lounge and the airport have been recognized around the world.”

Opened in 1959 by Queen Elizabeth II, the international lounge at the airport is undergoing renovations as a part of a planned revamp of the historic space.

It is not a restoration of the space back to its original look – tenants would have to be moved to accommodate that – but the authority is giving it a treatment that will bring it back to how people remember it.

While that work has been slowed down by the COVID-19 pandemic, the airport continues to work toward knocking things off the list.

Work was recently completed to remove the glass passenger tunnel known locally as the birdcage.

“It is a bit behind where we’d like it, but we are committed to making it happen,” said Gander International Airport Authority CEO Reg Wright. “I’d like to make happen at least some of the key components by the summer.”

Like Farwell, Wright was another son of Gander who spent time at the “Wandering Birds” watching people come and go. He remembers the texture of the sculpture, which has since become smooth from passengers touching it for good luck en route to their next flight.

The project is meant to breathe some new life into a space that has remained largely unchanged since then.

The renovation will produce a better utilization of the almost 9,000-square-foot lounge. There is also a desire to place interpretive boards around the lounge, install a theatre that will show aviation-themed films and create a gallery.

Work is scheduled to start on a new bar for the lounge.

“From our perspective, less is much more,” Wright said of the authority’s plan to keep the look and feel of the lounge as close to vintage as possible. “Wherever we can, we want to preserve it in the current form. If there is anything that is obtrusive and modern, the birdcages would be an example, we’re trying to remove that.”

He added the authority is trying to do a treatment of the lounge as people remember it.

The renovation plan was announced in 2019, and the airport authority received $1.5 million in funding for the project.

That money came from the airport authority, the provincial government and the federal government through the Atlantic Canada Opportunities Agency.

The project aims to highlight and preserve the airport as an important historical structure to the history of Gander and the industry.

It is something striking the right note with the Gander Airport Historical Society, a group dedicated to preserving the town’s aviation history, which has been working with the airport authority on panels and other aspects of the project.

Perhaps an understated part of the renovation process is the airport authority’s plan to allow the public to enjoy the lounge by opening it up to them.

The lounge is already a tourist destination, and Wright wants to see it become a hub for the community. That would allow the public to enjoy the space again, which includes the impressive “Flight and its Allegories” mural by artist Kenneth Lochhead.

It has been closed to the public since the late 1970s, when security measures were heightened.

“As much as we envision it as being able to welcome guests from away, really we want to make it a place where Gander can gather again,” said Wright.