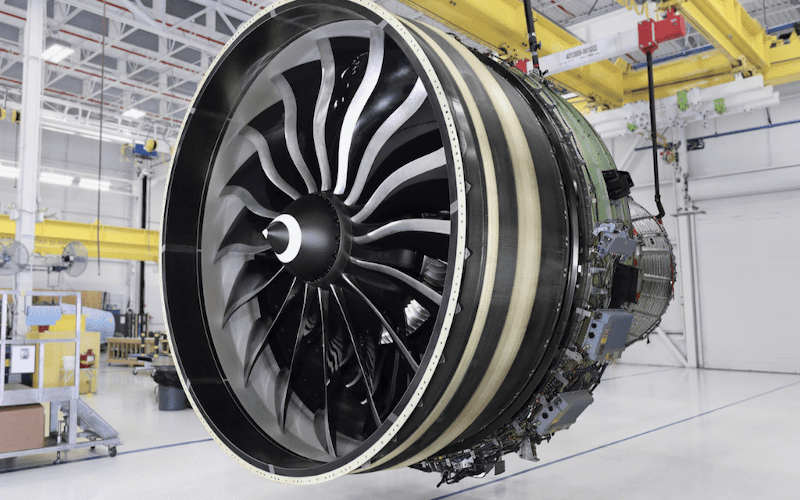 Ten GE9X engines have been delivered for Boeing’s four 777X flight test airplanes. The GE9X engine is in the 100,000-pound thrust class, employing a front fan of 134 inches in diameter. (Photo: GE Aviation)

GE Aviation announced today its GE9X engine, which will power the new twin-engine Boeing 777X family, has been certified by the United States Federal Aviation Administration. GE has been designing and testing the GE9X since 2013. In late-January 2020, Boeing completed its first flight of the 777X from Paine Field in Everett, Washington.

“It takes the world’s best talent in jet propulsion to create a game-changing product like the GE9X engine,” said John Slattery, president and CEO, GE Aviation. “There is no substitute that can achieve the combination of size, power and fuel efficiency of the GE9X. This engine will deliver unsurpassed value and reliability to our airline customers.”

The GE9X engine is in the 100,000-pound thrust class, employing a front fan of 134 inches in diameter with a composite fan case and 16 fourth generation carbon fiber composite fan blades. GE points to other key features of the engine as including: a highly efficient next-generation 27:1 pressure-ratio high-pressure compressor; a third-generation low emissions TAPS III combustor; 3D-printed parts; and lightweight and durable ceramic matrix composite (CMC) material in the combustor and turbine.

“Just as the GE90 pioneered new technology for commercial aircraft engines more than 25 years ago on the Boeing 777, the GE9X sets the new standard for engine performance and efficiency thanks to the incorporation of GE’s most advanced technologies developed over the last decade,” said Bill Fitzgerald, vice president and general manager of Commercial Engines Operation for GE Aviation.

“The GE9X engine has been through a rigorous and thorough certification and testing process,” said Karl Sheldon, GE9X program general manager. “We are pleased with the performance of the engine, which has been validated through extensive ground and flight testing. We are excited to deliver a mature, state-of-the-art product to operators around the world.”

GE explains its main focus remains working with Boeing to complete the 777X flight test program and entry into service. Eight GE9X test engines and two test spares have been produced and delivered to Seattle for Boeing’s four 777X test airplanes. As well, several GE9X production engines have been assembled, and GE is in the process of completing factory acceptance tests.