News
Get home on time – Cessna stars in Times Square 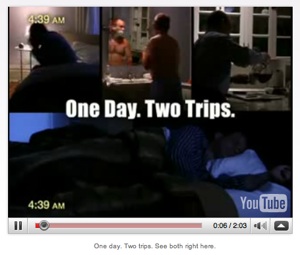 Cessna Aircraft Co. is taking its marketing program to Broadway with a new video appearing over the next two months on one of the jumbo video screens in New York's Times Square.

July 8, 2008, Wichita, KS – Cessna Aircraft Co. is taking its marketing program to Broadway with a new video appearing over the next two months on one of the jumbo video screens in New York's Times Square.

The video – One Day, Two Trips – is an innovative presentation of the benefits of travel using a business aircraft versus commercial flights. Using a split screen, the 30-second piece follows two business travelers in a time-lapse view of their day as they both travel from Chattanooga, Tenn., to the same building in New York on the same day.

The full two-minute version of the video can be viewed at www.GetHomeOnTime.com .

"We're excited about the video and about the opportunity to share it with the diverse and large audience in Times Square," said Tom Aniello, Cessna vice president, Marketing. "The message here is that using a business aircraft is the most efficient use of an executive's time and of the shareholder's resources for much of today's business travel. Cessna is uniquely able to offer time-saving travel solutions for nearly any business travel need, whether it's for an entrepreneur learning to fly or a corporation needing an efficient global travel tool. When you factor in time savings, increased productivity, more time with family and lower stress levels on the business traveler, many companies find travel by business aircraft to be the best alternative."

The video was produced by Cessna's Marketing Department in association with Mandala in Bend, Ore., and North by Northwest Productions in Spokane, Wash.