News
Glide Path: A bird of a different feather 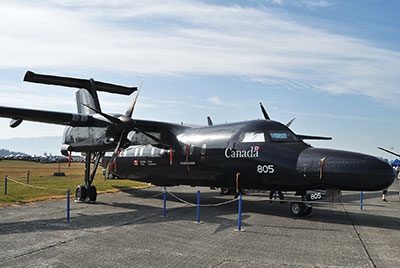 Earlier this year, I had the opportunity to spend a morning at 402 Squadron RCAF in Winnipeg, a unique unit in a military that finds increasingly creative and effective ways to get the job done in a world where budgets go to die.

402 Squadron is the home of the Canadian Blue Gonzo, a strikingly unique bird that you won’t find in Hinterland Who’s Who. Few in number and native to southern Manitoba, the blue bird with the big nose will occasionally show up as far away as Canada’s Atlantic and Pacific coasts and has been known to venture as far as the Gulf of Mexico.

Gonzo is the affectionate nickname bestowed on the four CT-142 Dash 8s operated by 402 Squadron, a tip of the hat to the super-sized nose cone that houses the enhanced radars and sensor packages used to train the RCAFs next generation of Air Combat System Officers (ACSO) and Airborne Electronic Sensor Operators (AES Op). The CT-142 is a civilian Dash 8-100 aircraft, but without the civilians. Apart from the nose job to accommodate the radars, there’s also the replacement of the passenger seating by operator consoles, workstations and military radios.

The Squadron CO, Lt. Colonel Trevor Campbell, describes 402 as a unique entity and a bit isolated from the rest of the air force in that 402 comes under 2 Canadian Air Division, whereas operational squadrons come under 1 Canadian Air Division. Of the 200-plus personnel that make up the squadron, about half are reservists and that includes all positions from clerks and technicians to pilots. Many of the pilot and technician reservists are employed by commercial airlines, a big plus for Lt. Col. Campbell, who likes the expertise they bring in from the commercial world.

The squadron has its own embedded engineering officer and its own Operational Training Unit (OUT) to train pilots to fly the CT-142 and technicians to work on them. Pilots come from various wings throughout the RCAF and take their operational training on the Gonzo, from first officer through aircraft captain, training officer up to standards officer. Techs arrive from Borden as QL-3 and get trained up to QL-5. It’s a self-sustaining process.

The ACSO and AES OP courses run eight to nine months in length, with as many as four ACSO courses for officers in a year and a couple of AES Op courses for NCOs. Initial training for both courses is classroom training and then the successful candidates move into the aircraft for the second phase of their courses. The flight training starts low and slow so to speak, and becomes increasingly complex, largely influenced by the mission profile of the Aurora and Sea King aircraft.  Simple low-level flights will evolve into more complex tactical missions, identification of targets, changes in routing in response to changes in mission profiles, such as re-deployment on SAR missions, as will often happen in the field. With a new course starting about every two months, the flying requirements are spread out in a way that allows ongoing maintenance to be factored into the rotation. Entering their third decade of service, all of the four aircraft have between 14,000 and 15,000 hours.

Day-to-day flight training missions start and finish from Winnipeg, but there are two longer trips built into the ASCO course. The first is generally to Halifax, though occasionally there are forays to the west coast, to give the candidates an introduction to an operational squadron and a taste of what their future will be. If time and circumstances allow, they will go flying in an Aurora or Sea King and maybe spend some time on board a ship. It’s not a holiday, as the trainees are responsible for planning and plotting the route in both directions. The second trip introduces the neophytes to American airspace and the differences between how things are handled south of the border.

In a reflection of a bygone era, it’s not just Canadians being trained in the Gonzo. There were two Germans on site during my visit, a couple from Singapore were expected to arrive shortly and Australian and New Zealand aircrew had passed through earlier in the year. Every couple of months it starts again, as another group of would be ACSOs or AES Ops arrives, most not far removed from the outside world. At the end of their nine months, they’re presented with their wings and sent on to their operational units for their type training.

As the RCAF serves Canada’s interests across the country and around the world, it is remarkable to realize how many of those missions are dependent on a small group of men and women who pass through that one door in Winnipeg.