There’s a lot of aviation history on Vancouver’s waterfront. Almost a century ago, in March 1919, W.E. (Bill) Boeing made the first international air mail flight from Vancouver to Seattle in a Boeing floatplane. With no facilities catering to aviation on the Vancouver waterfront at the time, photos from the day show him being rowed out to the waiting aircraft and clambering up into the cockpit clutching a Canada Post Office canvas bag in one hand.

In 1929, Mr. Boeing’s company started building seaplanes in a factory located near the entrance to Stanley Park, roughly where he had set out from 10 years before. Today, Vancouver’s harbour has the most seaplane traffic of any city in North America, if not the world and there’s not a rowboat in sight. Passengers board their aircraft at the Vancouver Harbour Flight Centre, a short walk to the central business district, but still in Coal Harbour.

Water has defined Vancouver and the West Coast of Canada, since humans arrived thousands of years ago. After the First World War, the first aircraft tentatively appeared. Aviation grew slowly on the coast between the wars, as airfields were few and far between and seaplanes (flying boats or floatplanes) predominated. The years following the Second World War saw a sea change in transportation on the West Coast. Aircraft started to nibble away at the passenger loads of the coastal steamers. While airports had been built on the coast as part of the war effort, many communities were still only reachable by water. Seaplanes became an integral part of the West Coast lifestyle. While there were a number of different aircraft in operation, it was the introduction of the de havilland Beaver on floats as the right plane at the right time that took things to the next level.

While business was booming for many, it was still a tough way to make a buck. Most operators were small, basic Mom and Pop operations. Safety wasn’t necessarily a prime consideration and there was often pressure to get the job done in less than ideal conditions – or the client would find someone who would. Then the business environment changed. The fish canneries were closing and the forest industry went through a series of mergers and acquisitions at the same time that world markets shifted. A series of what were described as minor recessions through the 1970s and into the early ’80s were devastating to those in the coastal aviation business who saw their key customers shrink or disappear altogether.

At the same time one market segment was disappearing, another was expanding. Scheduled floatplane service, primarily from Vancouver, was being developed. There were operators offering service from what were ostensibly temporary facilities on docks along the waterfront road. In 1982, the company that is now Harbour Air was started by Greg McDougall and joined the other operators on the waterfront. Today, 35 years later, most of those other operators are a distant memory while Harbour Air has established itself as the largest operator of scheduled seaplane service in North America and possibly the world (it all depends on the unit of measurement one relies on). The company operates 38 upgraded Otters and Beavers with up to 200 scheduled flights a day.

I recently spoke with Peter Evans at Harbour Air. He talked about changes in attitudes over the years and the way operators and pilots look at the industry today versus “then.” Safety is paramount – without exception – and the days of “get there at any cost” are over.  Then there’s how pilots look at the job. It used to be that flying Beavers, Otters and Twin Otters was simply a stepping-stone to a job with a “real” airline. But today, more and more pilots are choosing to make this their career. Flying legacy aircraft is now an enticement and there can be some serious perks, as evidenced by Harbour Air being tasked with transporting Will and Kate along with Prince George and Princess Charlotte from Victoria to Vancouver in Twin Otter.  You can’t buy the goodwill that was generated by that trip.

If you look hard enough as you stare out over Vancouver harbour you can see the shadows of the canoes of the ancients that once patrolled this coast. Look further to the horizon for the shadows cast by the sails of Narvaez and Vancouver. Then look back at today, as the seaplanes come and go against a backdrop of today’s giant ships.  It’s still all about the ocean . . . and Harbour Air has indeed made a name for itself on a global scale. 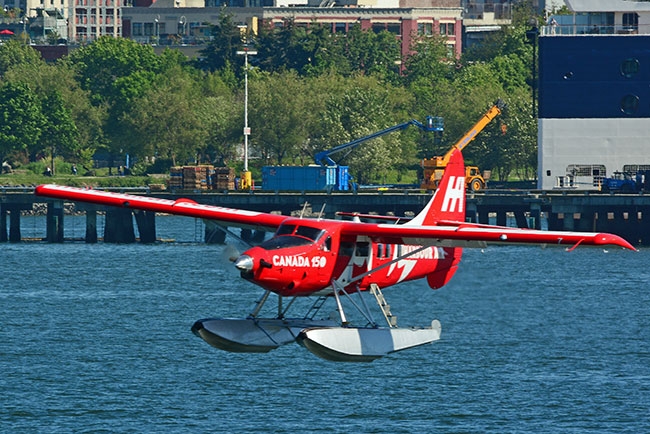 “It’s still about the ocean . . . and Harbour Air has indeed made a name for itself on a global scale.”