News
A mountain of invaluable resources

The 2015 Abbotsford International Air Show provided plenty of aviation eye candy for this year’s show, but the real aerospace meat and potatoes was being served up next door at the Aerospace, Defence and Security Expo. 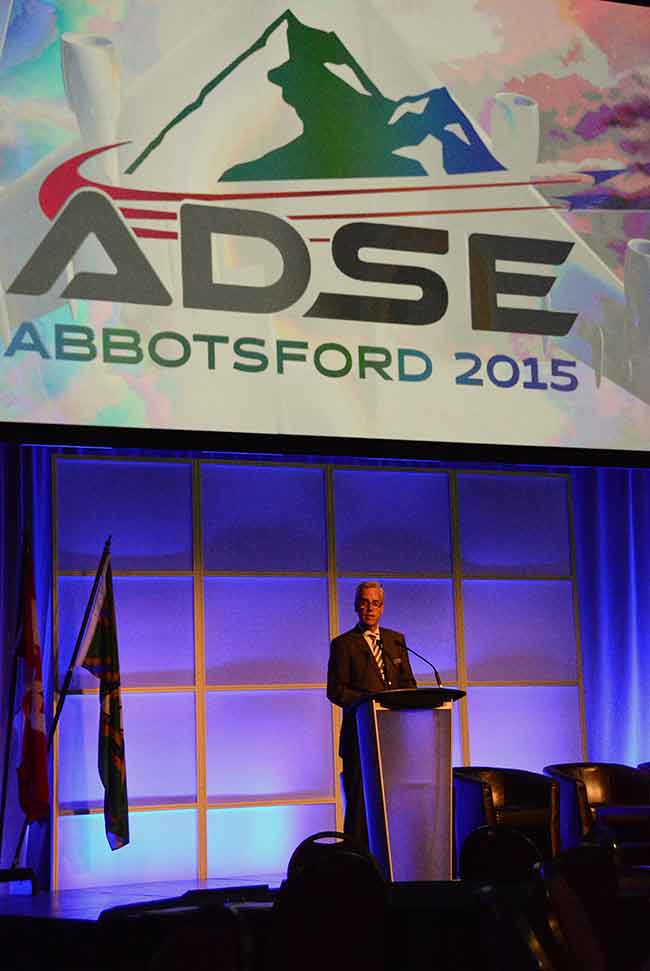 One of the shortcomings of the Canadian aerospace industry in general is how politicized the sector has become. The 2015 Abbotsford International Air Show provided plenty of aviation eye candy

ADSE has grown in five short years from an informal gathering to become a premiere networking event attracting leaders from industry, government and education. Today, ADSE is organized by the Aerospace Industries Association of Canada, Pacific Division (AIAC Pacific). In his role as chair of AIAC Pacific, David Schellenberg welcomed 2015 attendees, stressing the need for the industry in B.C. to understand what it can be good at and focus on that.

For in-service-support, Cascade Aerospace and Heli-One are shining examples of B.C.-based companies that can compete in a global market. On the aviation training side, Boundary Bay Airport is now the busiest training airport in the country, while Chinook Helicopters offers the largest rotary training program in Canada and BCIT attracts students from across the country and around the world to its unique aerospace campus.

There are also opportunities in advanced manufacturing, where industry works more closely with the education and research community, with the University of Victoria’s Centre for Aerospace Research (CfAR) as a great example. And last but not least, space is indeed the final frontier and Richmond’s MDA is a shining example of a Canadian company taking its products and know-how around the world and beyond.

For British Columbia, often feeling slighted as the orphan on the wrong side of the mountains, future opportunities may lie just a short distance to the south. Melanie Jordan, COO of Pacific Northwest Aerospace Alliance (PNAA), brought greetings from the aerospace industry in Washington State. The metro Seattle area, home to Boeing, is the single largest aerospace cluster in the world and it’s only a two-hour drive south of the border. There is a significant Canadian presence in the Boeing supply chain and there is room for a lot more in the years ahead. It is “Aerospace without borders,” as Jordan put it.

One of the shortcomings of the Canadian aerospace industry in general is how politicized the sector has become over the years, a comment offered by several speakers offering different perspectives.  It’s difficult enough being strung out geographically, without the endless bickering (all too often fueled for political gain) that offers little more than an endless chorus of “mom liked you best” thinking.

The future survival of Canadian aerospace demands a global presence. With the BRIC countries developing their capacity for sophisticated industry, Canadian industries have to understand what they can offer in these emerging markets. We can’t compete in the dollar-for-dollar labour market, but Canadian companies can compete and thrive in the markets that depend on innovation and intellectual property.

Mike Greenley, vice-president and general manager of CAE Canada did an admirable job pinch-hitting as the closing keynote speaker in place of RCAF Lt. Gen. Mike Hood, who was grounded by the federal election. Greenley picked up on David Schellenberg’s comments about knowing what you are good at and going with it. Greenley spoke of Canada’s preeminence in training aviators during the Second World War. That program created new airports across the country, Abbotsford (YXX) being but one of them, many of them thriving today. CAE is a prime example of a Canadian aerospace company that has taken that training model developed almost three-quarters of a century ago into the 21st century and around the world.

The election that grounded Gen. Hood from speaking also kept federal politicians to the absolute minimum, as local MP Ed Fast, Minister of International Trade before the election call, spoke briefly in understated tones about aerospace-related accomplishments of recent years. B.C. saw three cabinet ministers speak over the two days of the conference, each one underscoring the province’s commitment to the aerospace sector and its priority of ensuring educational opportunities exist for future generations of aerospace workers.

The main take away from ADSE 2015 is that while government support is necessary, to be truly effective, it must address the long-term issues and not simply be a short-term fix. It’s not a matter of buying Canadian at any cost, but rather a need to understand what the benefits of buying (and developing) Canadian is – and not just for the aerospace industry but for the entire economy. It’s a matter of growing our aerospace industry, especially on the intellectual side, to ensure Canada can be master of its own domain while competing in the world market in categories where we can truly excel.