I penned this column a few days before the 2016 Abbotsford International Air Show which this year featured both Boeing’s F/A-18 Super Hornet and Lockheed’s F-35 Lightning, the two leading contenders to replace the RCAF’s aging CF-18 Hornets. 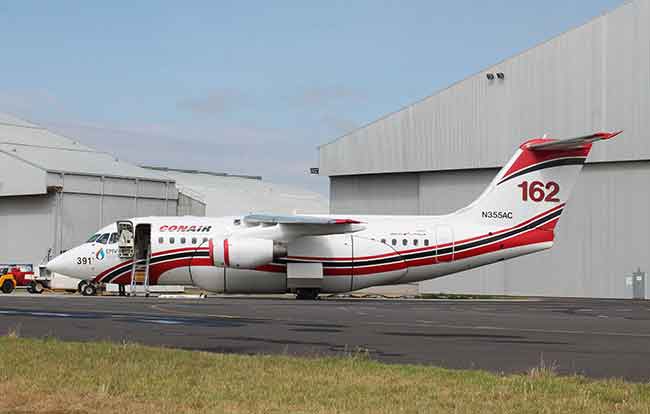 Conair’s next step is to establish a Wildfire Training and Simulation Centre at Abbotsford in partnership with CAE. I penned this column a few days before the 2016 Abbotsford International Air Show

It was an opportunity for the general public to get up close, have a good look and possibly even kick the tires, so to speak. Like shiny things everywhere, these shiny things that go fast and make lots of noise capture a vastly disproportionate proportion of attention. On the Thursday and Friday leading up to the Air Show, the annual Aerospace, Defence & Security Expo (ADSE) convenes in the exhibition hall in the shadow of the YXX control tower.

If you say “Canadian aerospace industry” to the average person, you will most likely get a wide range of blank stares in return. If you say Airbus or Boeing, most people know who built that airplane that took them on their last vacation. If ask them about the F-35 or the Super Hornet, how many will be able to identify Lockheed or Boeing as the manufacturer? Not too many and the overwhelming response for both commercial and military aircraft is that they are built outside of Canada.

The City of Abbotsford “gets it” when it comes to the aerospace industry. As the landlord, the city has been working hard to create the foundation that will make YXX an attractive proposition for new companies or existing companies that are ready to expand into the region.

Cascade Aerospace and Conair are two bookend tenants that are proof positive that local businesses can survive and thrive in the international marketplace. With Canada’s largest rotary-wing flying school, Chinook Helicopters, on site there is always literally a buzz in the air. These companies bring long-term, well-paying jobs into the community and that is the long-term benefit to the City of Abbotsford.

The airport at Abbotsford was built at part of the Commonwealth Air Training Program. The fighter aircraft in the air and on the static line today are every bit as attention getting as were the planes and pilots of 75 years ago. Yet today, there are a handful of companies in British Columbia that are leading the way in developing and operating aircraft engaged in a modern-day struggle against an old foe, a battle that is being fought in just about every corner of the world: aerial firefighting.

Conair, with its headquarters on the west side of YXX, is a world leader in aerial firefighting and fire management. As the legacy large air tankers have started approaching the end of their serviceable life, Conair has been a pioneer in adapting jet aircraft, specifically the AVRO RJ85 airliner into tankers. The aircraft are operating in Australia, the U.S. and Canada and Conair’s next step is to establish a Wildfire Training and Simulation Centre at Abbotsford in partnership with CAE.

Coulson Flying Tankers of Port Alberni may be best known for its Martin Mars, which recently stole the show at Oshkosh 2106, but there is much more going on. Coulson has been developing C-130 Hercules as air tankers, utilizing its own computerized “smart tank.” They have been operating their C-130s in firefighting operations in Australia and North America, as well as their S-61 helicopters.

The company recently signed a contract to design, manufacture and install tanking systems in seven C-130 aircraft for the U.S. Forest Service. In November 2015, Coulson signed a deal with Airbus to manufacture and install a version of the taking system in the Airbus 295, a deal that would see an expansion of the airport in Port Alberni to accommodate large aircraft, which would prove beneficial to both Coulson and the entire community.

In June, Viking Aircraft of Victoria announced it had acquired the Type Certificate for Bombardier’s CL-415 water bomber, another Canadian heritage aircraft. Having just recently delivered its 100th 400 Series Twin Otter, it will be interesting to see what Viking may have in store for future versions of the CL-415.

I suppose one day the government will make a decision on buying a new fighter jet for the RCAF and that would be a good thing. But let’s not lose sight of the heavy lifting that these three Canadian companies are doing around the world in aerial firefighting, year after year in a business that unfortunately is a growth industry.