I always find it important to review moments in history that have shaped this country and the people who call themselves Canadians. In September, ceremonies were held in many communities to mark the 77th anniversary of that epic struggle that drew its name from Winston Churchill’s speech in Parliament on June 18, 1940 – “What General Weygand has called the Battle of France is over . . . the Battle of Britain is about to begin.” For much of the summer of 1940, the airmen that Churchill would later refer to as “the few” stood tall in their Hurricanes and Spitfires. Just over 2,900 pilots were awarded the Battle of Britain clasp.

The RCAF squadrons were the result of a bitter and protracted struggle waged by the Canadian government; the idea that Canadians should serve as Canadians, in Canadian units under Canadian leadership. It was a struggle with its roots in First World War. We know of Vimy and the performance of the Canadian Corps under Arthur Currie, but few of us are aware of the Herculean effort expended by prime minister Robert Borden in attempting to assert the role of Canada and other members of the Commonwealth during the Paris Peace Conference of 1919.

Mackenzie-King was determined to follow Borden’s path of asserting Canada as a sovereign nation. In 1939, Canada made a declaration of war separate from that of Great Britain, unlike 1914 when Canada was carried along as part of the Commonwealth. Both the government and military leadership were determined to exert as much Canadian influence as possible.

The decisions that led to Canadian involvement in the doomed defense of Hong Kong and later on the beach in the failed raid at Dieppe could be seen as the result of demanding more Canadian involvement. In the air, the irony of the Canadian squadrons was that just as many Canadian personnel served in RAF or RN squadrons as RCAF squadrons. This was the reality of the operational tempo of the war and the success of the Commonwealth Air Training Program. Canadians flew and served as aircrew (and groundcrew) in all theatres of the war.

When the war was over, those air force officers and enlisted men came back to work and provided a country ripe for growth with the people who had the vision and skills to make that growth possible. Knowing a bit of history allows you to look a bit further into the future as I did at the Battle of Britain commemorative parade held at Boundary Bay Airport (CYBB). The significance of Boundary Bay being that it was both part of the Commonwealth Air Training Program and an operational RCAF base during the Second World War and today is headquarters of the B.C. Provincial Committee of the Air Cadet League of Canada.

The parade was made up of more than 600 cadets representing 17 cadet squadrons from around Metro Vancouver. Led by a massed cadet band (they were great!) and colour party, the cadets paraded smartly in front of a crowd of parents and VIPs, undeterred by the driving rain. The reviewing officer was Lt. Col. (ret) Maryse Carmichael, former CO of 431 Demonstration Squadron and current honourary president of the air cadet league of Canada.

Addressing the parade, Lt. Col. (ret) Carmichael emphasized that it was her involvement in air cadets as a teen that gave her the skills and confidence that have enabled her to achieve what she has in her life.

If I had to explain the relationship between the past, the present and the future I would say it’s like driving a car on a highway. The present is where I am right now, hopefully with both hands on the wheel and a full tank of gas. The future is the windshield and the past is the rear-view mirror. The windshield is the size it is because it’s important to know where you’re going and be prepared to deal with the bumps in the road and detours you may encounter along that road. The rear-view mirror is there to give you a view of where you were, without blocking your vision of the future. If you don’t know where you came from, you’ll never be sure of where you’re headed. Standing at Boundary Bay, I was surrounded by the history of our past, but I could see the road ahead in front of me and I liked what I saw. 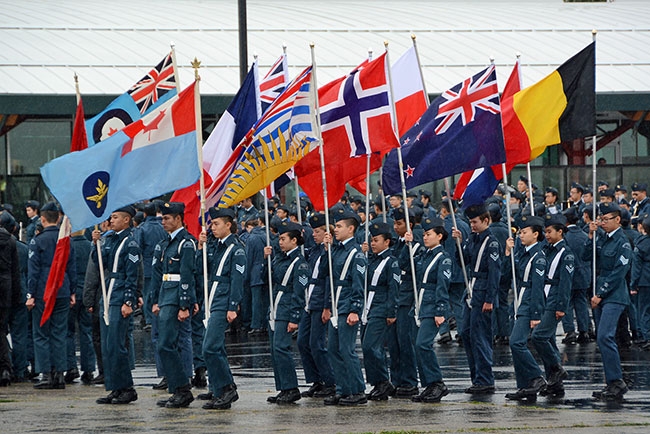 “Knowing a bit of history allows you to look a bit further into the future.”


Related
Glidepath: Honouring true professionals
Heroes of the skies
Aging CF-18s should not be flown much past 2025: report
Glidepath: Sorting out the process