As we navigate our way through this year of Canada 150, we’ve heard a lot about Canadian values. And yes, it sounds great, but as with many things in life, Canadian values are difficult to articulate. 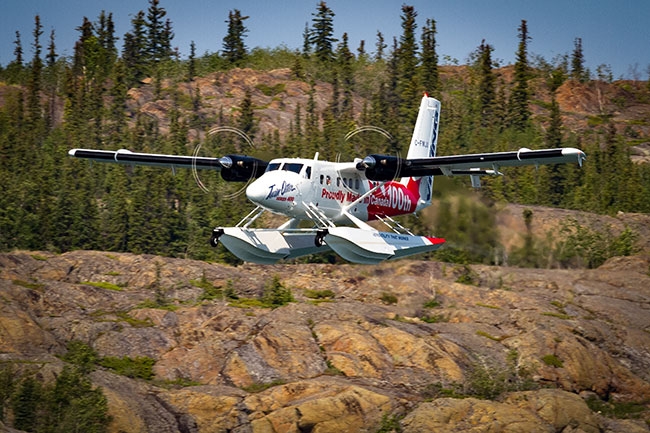 The Twin Otter Series 400 is always on display with the big boys and it fits right in. As we navigate our way through this year of Canada 150

I’ll give you some living examples of Canadian values and they’re brought to you by the letters “D,” “H,” and “C.” That’s right, these aircraft have played such a huge role in this country’s expansion, and have helped put the baby boomers where we are today.

Viking Aircraft’s Chipmunk, Beaver, Otter, Cariboo, Buffalo, Twin Otter and Dash 7 are still flying – some more than others, but what put them there and what keeps them there are the intangibles that we’re thinking about when we say, “Canadian values.” These are attributes we can’t quite put our finger on.

They’re tough, no doubt about it; hardworking, for sure and and built to last and then some. I like these as values, because they’re enduring and not part of the flavour-of-the-month club. Proof positive for me was the way the world greeted the Series 400 Twin Otter when Viking Air made the decision a decade ago to re-introduce the aircraft. It was an instant success, as the order book quickly demonstrated. The irony was, none of the orders were for Canada because the Twin Otters in service with Canadian operators weren’t ready to be replaced.

Viking Aircraft president and CEO
David Curtis has travelled the world selling the new Twin Otter. He’s been to Farnborough, Paris, Singapore, Oshkosh and many other key air shows and conferences. The Twin Otter Series 400 is always on display with the big boys and it fits right in. The aircraft have been sold to operators around world and along with their older relatives, they are flying on every continent and literally from pole to pole.

And new operators are embracing the concept of float-equipped aircraft servicing areas where airstrips and runways are rare, but water abounds. It’s the same way those early DHC aircraft served in Canada. In fact, Viking has gone a step further and for me it’s a true Canadian moment. The government of Vietnam recently purchased Series 400 Twin Otters as maritime patrol aircraft, but they got much more than just the keys to the aircraft. Their personnel came to Canada and received a comprehensive training and education package that saw them leave here fully qualified to operate those new aircraft. There’s no better way to ensure success, which translates into satisfied customers.

In June of this year, an announcement was made that the Peru Air Force, incidentally the largest fleet operator of Series 400 Twin Otters, would be the first customer to benefit from the new Series 400 “Level D” flight simulator program offered through Viking’s sister company, Pacific Sky Aviation. Offered at Pacific Sky’s Calgary facility, the simulator offers comprehensive training in both wheeled and float operations across a wide range of conditions, with the result being a higher level of competency for the customer.

Last year, Viking made another significant move acquiring Bombardier’s 215/415 program. Think of it as a big brother to the existing DHC progeny – another Canadian designed and built aircraft that operates around the world and can rightly be described as an icon in its own right. Now past a half century since the original CL-215 was introduced, it is still the only western purpose-built firefighting aircraft.

At least one operator has been using the aircraft as on maritime patrol and SAR missions in addition to firefighting and while there had been some discussion about marketing the aircraft as a multi-mission platform, it never seemed to gain traction. In an era where budgets are increasingly tighter for both governments and private operators, it’s difficult to operate an aircraft in a single mode for a few hundred hours a year. It will be interesting to see where the 415 is headed if it is to become that multi-mission platform. Now that it has found a good home with a stable family, the application of a little TLC may provide a new dawn.

Earlier this year, I wrote about the importance of seaplanes on Canada’s West Coast – in the growth phase over the past 60 years and today as an important part in the transportation web that ties this province and its economy together. Now, we can see these same aircraft taking Canada to every corner of the world. In many cases, a ride on one of these aircraft may be someone’s only connection to Canada. When I hear someone say, “the world needs more Canada,” this is what I think of.