During its deployment in Chile, the Global SuperTanker set a world record for liquid dropped in a single day by a land-based aerial tanker at 134,400 gallons (508,000 litres). 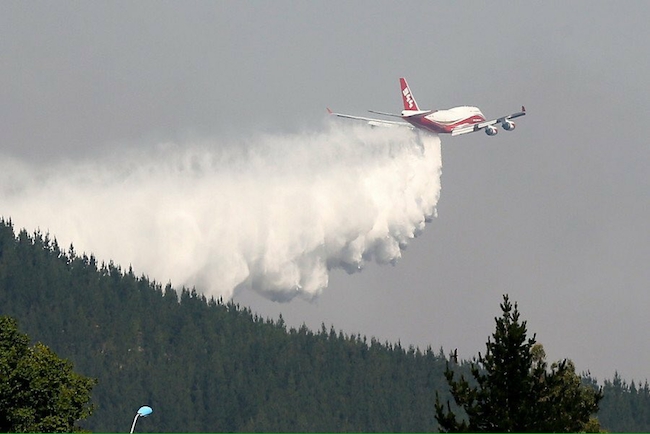 The SuperTanker, which has now been deployed in Chile for nine days, achieved this milestone through seven sorties on Wed., Feb. 1, which far surpassed the previous known world record of 110,000 gallons. The record was achieved while the aircraft assisted the country’s military and firefighters combat the worst forest fires Chile has ever seen. The SuperTanker has flown approximately 11,500 miles on 36 separate missions spanning several regions of the country, amassing over 40 hours of flying time in Chile. It has dropped a total of over 670,000 gallons (over 2.5 million litres of water on spreading fires.

The SuperTanker has been highly effective and its efforts have been well received by the people of Chile. A local official credited the Supertanker with saving five firefighters and a village on the verge of being overrun by quickly-spreading fire. The wildfires have destroyed more than 900,000 acres of land and 1,100 homes since January.

“It has been a tremendous honour to work on behalf of the people of Chile as they fight these devastating fires,” said Jim Wheeler, president of Global SuperTanker Services, LLC (GSTS), which operates the aircraft. Wheeler has been on the ground with the crew of the SuperTanker since it landed in Santiago last week. “No other tanker has the capability to respond as quickly and comprehensively as the Global SuperTanker. This has truly been a team effort between our crew, the Chilean people and authorities, and private philanthropy to protect the people and property directly in harm’s way.”

The initial mission of the Global SuperTanker was underwritten through a generous donation from Fundaciόn Viento Sur of the Walton Family Foundation, which was made possible by Lucy Ana and Ben Walton. Its work continues through the support of the Chile-based Luksic Family. GSTS and its Colorado Springs-based crew have worked closely with the Chilean military and other government officials and personnel to respond to the areas hit hardest and in the direct path of quickly-spreading wildfires.

The Global SuperTanker’s arrival in Chile was met with widespread relief and excitement from the people of Chile, who had suffered from these fires with little relief in sight. In fact, #SuperTanker reached the top 5 of worldwide trending topics on Twitter last week, and with social media still full of user-submitted pictures and video of the SuperTanker, remains a top trending topic within Chile.

“The outpouring of heartfelt support that we have received on social media by the folks affected by these fires has been inspiring,” added Wheeler.

“The Global SuperTanker has performed effectively and efficiently during its incredibly important work in Chile,” said Harry Toll, Managing Partner of Connecticut-based private equity firm Alterna Capital Partners LLC. “We are incredibly proud of our portfolio company GSTS, and in particular the work of our crew and partners on the ground. The SuperTanker has no doubt been a very valuable asset deployed against one of the worst natural disasters in Chile’s history.”

Global SuperTanker’s B747-400, The Spirit of John Muir, incorporates a patented system capable of delivering single or multiple payload drops aggregating over 19,000 gallons (72,000 litres) of water, fire retardant, or suppressant. These fluids can be released at variable rates from the plane’s pressurized tanks, producing a tailored response to the firefighting need. This unique ability allows it to make as many as six drops in a single flight, while other aircraft such as the C-130 or BAe-146 must repeatedly land and refuel to achieve the same results. The Spirit of John Muir is the world’s youngest, most modern, and fastest Very Large Air Tanker (VLAT). With a flying speed of 600 miles per hour, the Spirit of John Muir can reach any part of the globe in 20 hours or less.