Highly productive people have always viewed corporate aircraft as “time machines.” After the Second World War, general aviation entered the turbine era and the first purpose-designed business jet entered service just over 54 years ago, in October 1961. The Lockheed L-1329 JetStar carried eight passengers over 1,825 nautical miles at a cruise speed of Mach .65. No other aircraft offered that combination of range and speed until the first Grumman G-1159 Gulfstream II was delivered in May 1968. Equipped with a significantly larger cabin, it could traverse 3,345 NMs while cruising at M.75. 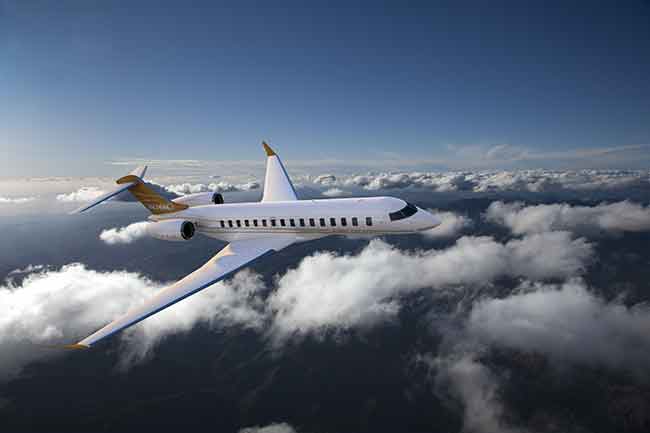 During the past four-and-a-half decades, business aircraft manufacturers have continually enhanced their top-of-the-line offering by listening to what their customers wanted. As the economic footprints of the buyers of these aircraft have expanded around the globe, so have their travel necessities. As a result, roomier cabins, increased range capabilities and higher cruise speeds influenced the evolution of BizJet design. Today, the three major players (Bombardier, Dassault and Gulfstream) each produce models that can fly at least 6,000 NMs at cruise speeds ranging from M.80 to M.90, depending on the type.

Such a dynamic market isn’t static for long. Bombardier is currently developing the most advanced corporate aircraft in its history – the Global 7000. It is doing so to meet its customers’ requirements and to remain atop the leaderboard of corporate-oriented airframers. Before discussing the new airplane in more detail, it is worth reviewing how the company has grown to be the industry’s front runner.

Bombardier’s aerospace heritage
The major manufacturer of surface transportation equipment entered the aerospace arena with its purchase of Canadair in 1986. With the subsequent acquisitions of Short Brothers (1989), Learjet (1990) and de Havilland Canada (1992), it became the world’s third largest civil aircraft manufacturer.

Since then, Bombardier has developed and delivered revolutionary designs that have assisted the operations of both scheduled airlines and business aviation. Its CRJ Series regional jets and Q Series turboprops suited the high-cycle operations of airlines’ hub-and-spoke networks around the world. On the BizAv front, successively improved variants of its wide-body Challengers led to the creation of the long-range Global Express. Today, approximately 1,000 units of the CL-600 Challenger family have been produced and about 750 members of the BD-700 Global family have been built. Thanks to these, and its smaller Learjet and Challenger models, Bombardier has grown to be the leading provider of aircraft for business aviation and regional airlines.

Given its record of successfully bringing numerous clean sheet designs to market, Bombardier was confident that it could handle the multitude of tasks associated with the design, production and certification of the largest aircraft ever built in Canada. On July 19, 2004, it announced its most ambitious project ever. The C Series program consists of two single-aisle twin-jet airliners that carry between 100 and 135 passengers. Larger than its CRJ models and smaller than the most popular models of the Boeing 737 and Airbus A320 families, the C Series models are targeting a niche market.

Since then, the C Series program has faced challenges related to internal and external issues.

Significant management changes have been made and substantial financial charges have been taken. With a $1 billion infusion of capital from the government of Quebec, the smaller CS100 was certified by Transport Canada in December 2015 and the larger CS300 should follow suit in 2016.

More than six years after the launch of the C Series, Bombardier Aerospace took on more heavy lifting when it announced the expansion of its Global family.

The Global 7000
On October 16, 2010 Bombardier introduced two new aircraft, the Global 7000 and the Global 8000, that would provide performance (speed and range) not available within the current Global product line. The former has a much larger cabin, while the latter will have an even greater range capability, albeit with a slightly smaller cabin.  Both are powered by a new General Electric engine that features improved fuel consumption, noise and emission metrics.

The Global 7000 has been designed to keep current BD-700 owners, who will be looking to upgrade, within the Bombardier family. The aircraft’s following features are intended to stimulate brand loyalty:

Clearly, these are attributes designed to meet the needs of the passengers and the crews who will be flying them.

The competition
In terms of long-haul capability at a high cruise speed, the current industry leaders are the Gulfstream Aerospace GVI Gulfstream G650 and its slightly longer-range sibling – the G650ER.

The G650ER has already completed impressive westbound trans-Pacific missions, including Los Angeles to Melbourne and New York to Beijing. Both legs had flight times of just under 15 hours. The longest leg flown by a G650ER to date was 8,010 NMs from Singapore to Las Vegas. The flight took 14 hours and 32 minutes at an average speed of M.85 and was assisted by a 76 knot tailwind.

Bombardier does not consider the G650ER to be a competitor to the Global 7000. Of all corporate jets currently in production or proposed, the G650ER is the most similar in terms of speed and range to what the Global 7000 promises to provide.

The defining difference between the two is the size of their cabins. While the Gulfstream GVI has a three-zone cabin, as well as a dedicated crew rest compartment, the Global 7000’s longer cabin allows four zones in addition to a crew rest station.

The Target Market
Is there proven demand for a such an aircraft? Very much so. More than 200 Gulfstream GVIs have been ordered to date. Approximately 110 G650s and 30 G650ERs are currently in service.

Based on a detailed review of the current owners of BD-700s and GVIs, the two new aircraft will probably be purchased by:

While Bombardier has not released an order backlog tally for its two new Globals, press releases have stated that NetJets (the world’s largest fractional provider) has 20 firm orders for a yet to be announced mix of Global 7000s and 8000s.

In addition, VistaJet has six firm orders and six options for Global 8000s.

The current status of the program
When the Global 7000 and Global 8000 were launched in the fall of 2010, the 7000 was due to enter service in 2016 and the 8000 was to follow in 2017. In order to obtain a more spacious cabin, longer range, higher speed and improved field performance, the Global 7000 required a stretched fuselage, new power plants and a completely new airfoil.

The design of the new wing presented some challenges and contributed to a longer than expected development phase. On July 30, 2015 Bombardier announced that the program was being pushed out two years, likely as a result of engineering talent being required for the delayed C Series program and the aforementioned wing issues.

Bombardier has dedicated Bay 10 in its manufacturing complex at Toronto’s Downsview Airport to Global 7000 and Global 8000 final assembly.

The major assembly involves attaching the nose and the empennage to the fuselage, then mating the wings to the fuselage. In order to complete those tasks in a timely fashion that doesn’t sacrifice accuracy or safety, Bombardier has introduced leading-edge technologies.

These include a laser-guided measuring system and two articulated drilling robots that have a tolerance of less than one thousandth of an inch. As a result, these key connections are expected to have a flawless fit on a consistent basis.

Today, the first two flight test vehicles are on the assembly line and the next two FTVs are to follow soon. While the approximate timing of FTV1’s first flight has yet to be announced, Bombardier is looking to have the first customer owned Global 7000 in service during the second half of 2018. Given the 80 per cent commonality between the two models, the Global 8000 should see its entry into service during 2019.

Final thoughts
Bombardier’s challenges associated with the development of its C Series airliner have received much attention and caused some to question the priority being given its new flagship business aircraft. Now that the C Series is nearing its first customer delivery, Bombardier Aerospace’s Business Aircraft division is focused on getting the Global 7000 flight test program underway. Owners of the approximately 650 Globals in service will be monitoring the airplane’s progress. Assuming typical industry brand loyalty, many of them will be looking at the Global 7000 as a suitable candidate when they decide to upgrade.