With EASA and FAA certifications in hand for the evolutionary Falcon 8X business jet, Dassault is focusing on securing approval this fall for two of the features which may help distance the aircraft from its Bombardier and Gulfstream ultra-long-range competitors: steep approach capability for short runways and the FalconEye head-up display (HUD) for low-visibility landings. 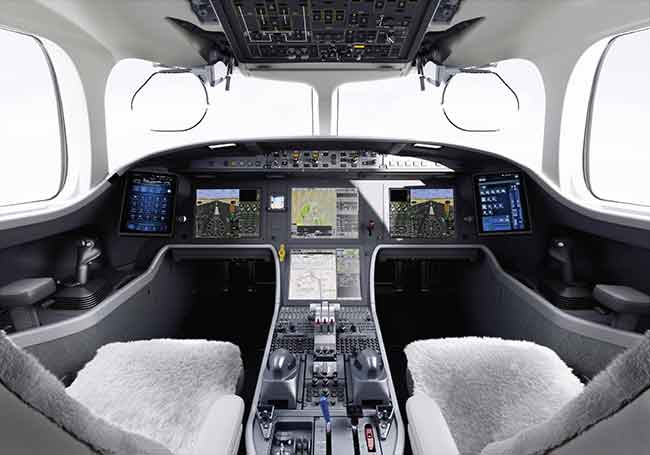 FalconEye is Dassault’s brand name for its revolutionary Combined Vision System (CVS), which they claim is the first HUD system to blend synthetic, database-driven terrain mapping with real-time, real-world thermal and low-light camera images into a single view.

“Even in clouds or low visibility, the pilot will have good situational awareness,” Dassault test pilot Tom Valette told Wings at the Farnborough Airshow in July. “He can see the context around him, especially the drawing of the mountains.”

Valette said the synthetic vision is applied to sectors that are distant from the aircraft with the infrared kicking in at closer range. The CVS essentially presents a monochrome green depiction of the runway in the below-the-horizon portion of the HUD and a computer-generated outline of mountains and other terrain above the horizon using an embedded synthetic database, much like a flight simulator.

The FalconEye system is equipped with a fourth-generation five-sensor camera that generates very high-definition images close to those on a military forward-looking infrared (FLIR). In synthetic vision system (SVS) mode, the camera displays a 30 x 40-degree field-of-view, one of the widest angles on any HUD, ensuring full coverage of the viewing area with no “tunnel vision” effects. Four of every five Falcon 8X customers have selected the CVS option.

Dassault says FalconEye will be made available in both single and dual HUD configuration on the 8x, possibly by late next year, providing the same head-up views and data to both the flying and non-flying pilot. Dassault maintains that a dual HUD system will improve crew coordination and hopes it will become an industry standard approach.

The two-year test program has encompassed more than 250 approaches in all types of operating environments, including fog, mist, snow and other severe weather conditions, plus simulator tests.

Dassault developed the first operational HUD on its Mirage IIIB fighter. In the early 1970s, the Dassault Mercure short/medium-range airliner was the first civil aircraft to be fitted with a HUD. In 1993, they introduced the first business jet equipped with a head-up guidance system on a Falcon 2000.

Customer pilots will be able to train on the FalconEye HUD from mid-September when FlightSafety International’s first Falcon 8X full-flight simulator is installed at their joint venture training centre with Dassault in Paris at Le Bourget.

Falcon 8X Service Entry by Q4
A derivative of the popular Falcon 7X, the 8X program was a surprise announcement in May 2014 at the European Business Aviation Conference and Exhibition (EBACE) in Geneva, Switzerland. The new aircraft is one metre longer than the popular 7X. But more important is the range extension, which makes possible flights between city pairs such as London-Hong Kong, Paris-Singapore, and Los Angeles-Beijing.

“We needed some significant extra range compared to the 7X to access some important city pairs with Asia mainly,” Frédéric Petit told Wings. Petit is in charge of the new Falcon 8X and all other Falcon programs with the exception of the Falcon 5X.

Dassault limited the stretch to one metre so the new 8X would be able to keep the balanced field length (BFL) capability under 6,000 feet, enabling access to short fields such as London City.

Despite the extra metre, the Falcon 8X weighs the same, without fuel, as the 7X: 41,000 pounds. Dassault designers were able to reduce the thickness (by fractions of a millimeter) in some of the wing panels and ribs, saving about 600 pounds total. In addition to range, the lower weight causes the wing shape to flex in flight, which Petit says also improves performance. The 8X tri-jet will be powered by Pratt & Whitney Canada’s 6,722-pound thrust PW307D engines.

To a pilot, the 8X should fly almost identical to the 7X. Petit said the difference in aircraft size has been adjusted for in the control load and digital flight algorithms. “It will be transparent for the crew,” he said. Dassault hopes regulatory authorities will eventually approve a common type-rating for 7X and 8X pilots.

Vadim Feldzer, who leads communications for the Falcon line, pointed out the Falcon 8X will offer “roughly the same performance” and “comparable cabin comfort” as other aircraft in the ultra-long-range category, but with less weight “which will require 35 per cent less fuel.”

Cabin comfort, of course, is another major selling feature for transoceanic bizjets, and Dassault is touting a choice of more than 30 different configurations, including three different galley sizes (two with crew-rest option for the three-member crew) and multiple lavatory layouts (including shower). Customers who choose a large entryway option will appreciate the openness and brightness of the area (thanks to two additional windows), a welcome change both when entering the aircraft and during long flights.

Feldzer said the Falcon 8X is much more fuel efficient than its competitors, about 15 per cent better than a Gulfstream G650 and even more compared with a Bombardier Global 6000. He explained the Falcon line are lighter in weight, thanks to the guêpe, or wasp-shape design of the aft fuselage and tight integration of three small engines.

It has been said that Dassault Falcon business jets combine the soul of a fighter jet with the interior comfort of your personal bedroom suite. “If you are talking with pilots anywhere, they will tell you the real difference,” said Petit. “Handling qualities for Falcons are one of the benchmarks.”

Like the 7X, the 8X features fly-by-wire controls. “We pioneered this technology on fighters,” noted Feldzer. “Our airplanes have always been very optimized because we have the same engineers who are developing fighters that fly at Mach 2 with very high-performance, highly efficient aerodynamics.”

List price for the Falcon 8X is about US$58 million, or 10 per cent higher than the 7X. Feldzer said about two-thirds of the 8X customers to date are corporations, with another 20-30 per cent in the individual/entrepreneur category. Many have moved up from the 7X: “Our customers are very loyal. We took some customers from our competition as well,” said Feldzer.

Falcon 5X Engine Delay
The clean-sheet, twin-engine, super-midsize Falcon 5X will not be in service until 2020, hampered by delays of the all-new powerplant: the 11,450 pound-thrust Silvercrest engine which is also French manufacturer Safran Snecma’s first business jet model. The engine has been in development for a dozen years, and draws on Snecma’s extensive commercial aircraft experience with the best-selling CFM56, of which more than 25,000 units are flying.

The Silvercrest engine design was frozen at the end of 2015, and Safran is in the “verification” phase, “which is now almost completed,” chief executive Phillipe Petitcolin stated in August. An initial test engine incorporating changes is expected to be assembled by the end of November.

In the first half of 2016, there were 11 cancellations of Falcon 5X orders, which Dassault blamed on the two-year engine delay. The Falcon 5X was announced in October 2013 at the National Business Aviation Association (NBAA) annual conference. It is now hoped that first flight will be in 2017 and engine certification the following year.

Originally known as the SMS during its secretive pre-launch preparation, the 5X features the largest cross-section among Falcon cabins with a 6-foot-6 inch ceiling height and an aisle wide enough for two passengers to actually move past each other. The cabin will be brightened during the day by 28 windows, as well as a “skylight” in the fuselage ceiling.

The flight deck resembles the 7X, with sidestick controls and a flat panel array. Like the 8X, the Falcon 5X will also offer a third-generation EASy (Enhanced Avionics System) integrated cockpit based on Honeywell’s Primus Epic system with a new flight management system (FMS) and 3D weather display. Options include a head-up display from Elbit Systems with both advanced infrared and synthetic vision.

Weathering a down market
Dassault’s mid-year report revised its delivery target downward to 50 Falcon jets in 2016 from a previous target of 60. They delivered 55 last year. This compares with 77 Falcon shipments in 2013 and 66 in 2014. Dassault’s Falcon backlog has dipped to 87 aircraft.

Chief executive Eric Trappier said the first half of the year had been marked by economic and geopolitical uncertainty, including the U.K. “Brexit” decision to leave the European Union, prompting some buyers to defer taking decisions on purchasing luxury jets.

“There is strong pressure on prices across the whole range,” he told a news conference, adding that Bombardier was “certainly the most aggressive in cutting prices.” He added: “This price war comes not only from the new market but also second-hand planes.”

Trappier attributed the slowdown to key markets China, Russia and Brazil, offset by modest recovery in Europe and
North America.