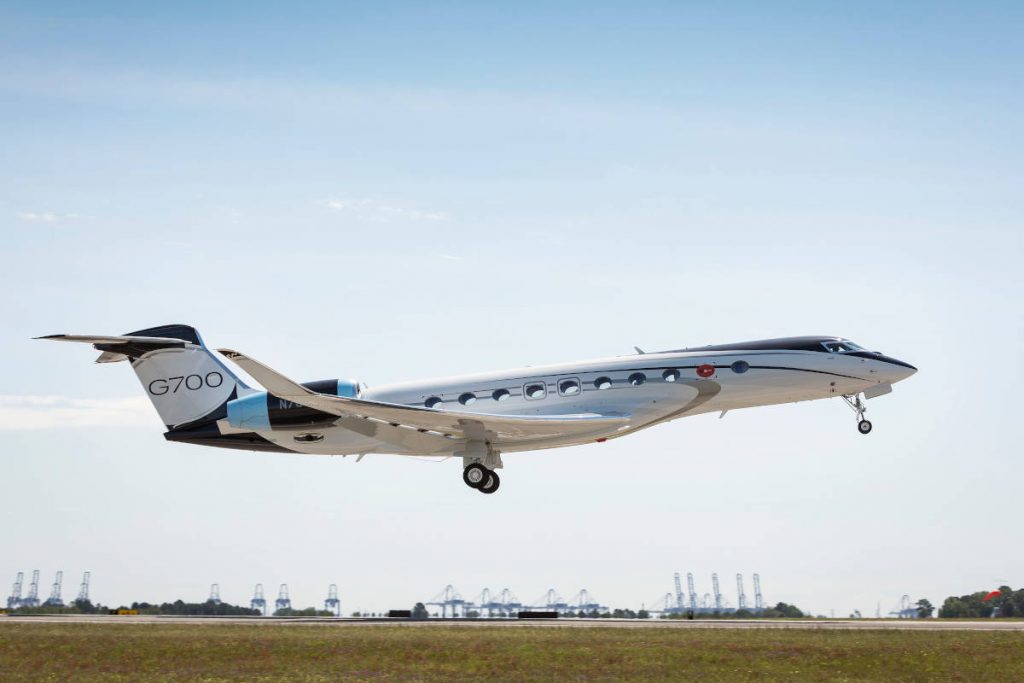 In just over three months, beginning on Valentine’s Day 2020, three all-new G700 test aircraft have taken their first flights as Georgia-based Gulfstream Aerospace works toward certification. Before the COVID-19 pandemic, Gulfstream projected to begin deliveries of the G700 in the summer of 2022, with a base cost of approximately US$75 million.

The three G700 flight-test aircraft have now flown more than 100 hours since the program’s first flight on February 14. Over that time, the G700 has reached a maximum altitude of 54,000 feet (16,459 metres) and a maximum speed of Mach 0.94. Gulfstream initially projected to commercially release the aircraft with a rated top speed of Mach 0.925.

The second G700 flight-test aircraft made its first flight on March 20, departing Savannah/Hilton Head International Airport (SAV) and flying for two hours and 58 minutes. The aircraft reached an altitude of 45,000 feet (13,716 metres) and a speed of Mach 0.85.

The third flight-test aircraft, also departing from SAV, flew for the first time on May 8 for three hours and two minutes. It also reached an altitude of 45,000 feet and a speed of Mach 0.85.

“All three flight-test aircraft are performing exactly as we expected them to, and that helps us ensure a safe and thorough certification of the highest performing, most spacious and technologically advanced aircraft in business aviation,” said Mark Burns, president, Gulfstream.

Gulfstream explains the current flight-test aircraft are being used for envelope expansion, flutter testing, flying qualities and flight control, as well as mechanical systems, flights into known icing and environmental control systems, among other tests.

Gulfstream states the G700 features the longest, widest and tallest cabin in the industry with 20 panoramic oval windows and up to five living areas, along with an ultra-galley with more than 10 feet of counter space and a crew compartment or passenger lounge; a master suite with shower; and what the company describes as the industry’s only ultrahigh-definition circadian lighting system.

The G700 also includes the Gulfstream Symmetry Flight Deck with what Gulfstream describes as the industry’s only electronically linked active control sidesticks, extensive use of touch-screen technology, and the company’s Predictive Landing Performance System.