From Denmark to Afghanistan, the saga of the 21st century unfolds. 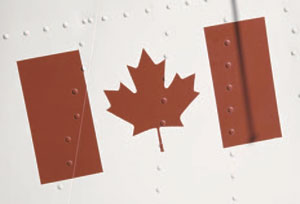 “People cannot take the Prophet Muhammad as a joke and defame him like
this, and many people said they would kill people who defame Muhammad
in that way – they are after Danish people, they are after Norwegian
people … and they’re asking me my nationality, they’re asking every
foreigner in the crowd their nationality, and being Canadian it was
very good, it was a very very intense and enraged crowd…. They were
very aware that it was the Danish press who printed it, and they’re
very aware of which countries are printing it and which aren’t. Being
Canadian was pretty much a lifesaver here…. I’m not a target.”

Those
were the breathless words of an obviously frightened CBC Radio
reporter, Spencer Osberg, as he covered a rioting mob attacking the
Danish Embassy in Beirut on Feb. 5. His closing words underscore the
wisdom of Canada’s ‘mainstream’ media – the television networks, the
big-city daily newspapers and general-circulation magazines like
Maclean’s – in not reproducing the notorious cartoons first published
last September 30 in Jyllands-Posten, Denmark’s largest newspaper.

But
let’s face it – the violent reaction in parts of the Muslim world was
staged and orchestrated. Radical imams from Denmark traipsed around the
Middle East in November and December for the purpose of agitation,
bearing with them not only the actual cartoons but far more offensive
ones – sexually offensive ones – of their own devising.

The
whole dust-up is of course a reflection of our times. Five years ago,
the often outrageous television cartoon show ‘South Park’ violated the
Muslim shibboleth against portraying the visage of the Prophet, without
any fuss resulting. But post- 9/11, when it became obvious that an
element of Islam was dedicated to the death of Western civilization,
everything has changed. The West, led by its principal target nation,
the US, had to take on the perpetrator, Osama bin Laden’s al-Qaeda, in
its lair – which happened to be in Afghanistan, where the
ultra-extremist Taliban regime of the Mullah Omar had given it refuge.

It
has since been the task of this violent element of Islam – an element
described by president George Bush as having “hijacked” a great
religion – to portray the war on Islamic terrorism as a war against
Islam itself. This story has sold alarmingly well among peoples so
often downtrodden by their own regimes and feeling left out of the
modern world. The Omar tyranny was overthrown and the Taliban and
al-Qaeda dispersed into internal and external exile. A new,
anti-terrorist government was installed and a parliament elected, but
that government’s hold on an impoverished country of tribal fiefdoms
and warlords is tenuous. Some inhabitants long for the state of order
that the Taliban imposed, just as some people in the former Soviet
Union pine for Stalin.

Canada has been involved in Afghanistan
from early on – remember the deaths of four Canadian soldiers by
‘friendly fire’ on May 17, 2002? But our role has taken on new
significance as our troops’ venue has shifted from the relative
security of the capital, Kabul, to Kandahar 480 kilometres to the
southwest. This is dangerous, Taliban-infested country. There have
already been casualties; notable incidents include the death of
Canadian diplomat Glyn Berry on January 15 in the suicide-bombing of
the military convoy in which he was travelling, and the axe attack at a
village meeting on March 4 that resulted in grave head injuries to Lt
Trevor Greene. And there was the unfortunate death of a local on March
15, when a passenger in a Kandahar taxi that got too close was shot and
killed by a Canadian soldier fearing a suicide-bomb attack.

The
Americans are used to these sorts of things in Iraq, and Canadians will
have to get used to them in Afghanistan. We are part of a multinational
effort to help the Kabul government build a better country and prevent
it from slipping back into a terrorist-supporting regime. This is going
to need the best morale that Canada can muster, and Prime Minister
Stephen Harper made an outstanding contribution with his surprise visit
to the troops on March 12-14. After that display of support, he can
never let his new government become known as one that let down the
troops.